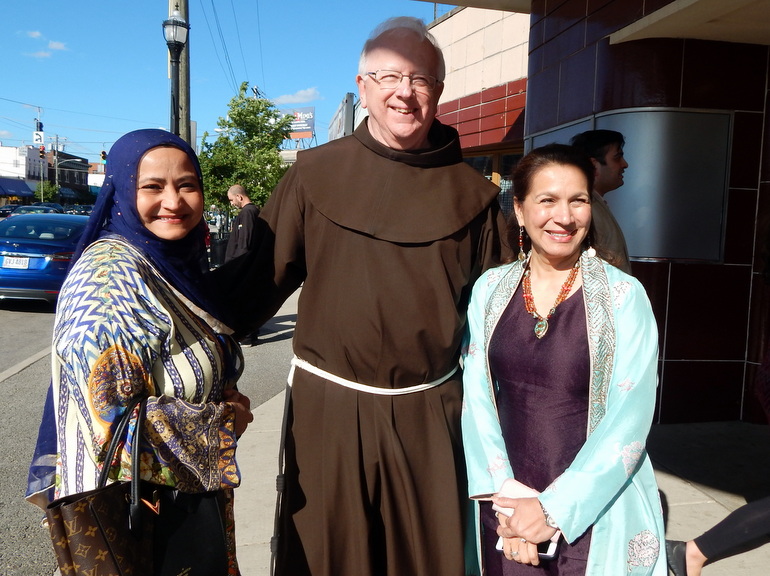 Fr. Al Hirt, OFM, greets Anila Zindani and Shakila Ahmad of the Islamic Center of Greater Cincinnati to the Cincinnati premier of The Sultan and the Saint movie.

“What a heritage he passed on to us,” Fr. Fred Link said after attending the Cincinnati premiere of The Sultan and the Saint. He was talking about St. Francis and his efforts to break the terrible cycle of violence between Christians and Muslims during the Fifth Crusade. The film displays in graphic detail how hatred thrives in ignorance, how violence breeds violence. But its enduring message is that peace is possible, and peace is personal. 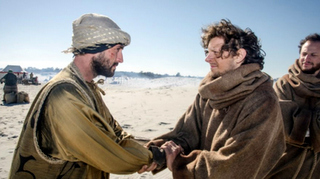 St. Francis and the Sultan meeting in this scene from the movie The Sultan and the Saint.

The encounter between Francis and Malik Al-Kamil, the Sultan of Egypt, was remarkable not only for its time, but for our time. Centuries later we still question, label and ostracize those of different cultures, colors or religions. Sunday’s screening brought together more than 450 people of all faiths, including 20 friars and the Mayor of Cincinnati. It was more than a premiere. The handshakes, hugs and conversations held the promise of further dialogue and understanding.

Here’s what friars said about the film and the experience.

Br. Dominic Lococo, OFM
When I first arrived at the movie theatre, I noticed the crowd waiting for the doors to open. Immediately I was in conversation with three or four of the Muslim ladies. They seemed genuinely interested in hearing about our Franciscan life and they had questions like, Why did I choose to be a brother rather than a priest? Where was my friary? How long have I been a brother? After a few minutes I told them I was doing all the talking, but they insisted I continue. They even had a picture taken of us.

I enjoyed the movie except for all the fighting, which was probably as brutal as it really was, more true to life than I cared to view. I also think the speeches could have been shortened. The bottom line is I’m glad I attended and wearing the habit was a big plus for all the friars. 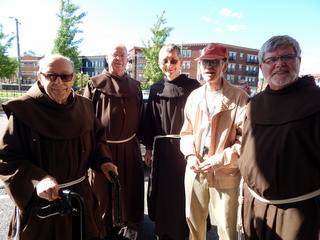 Fr. Fred Link, OFM
I was most impressed by the large and diverse crowd of folks at the program. In the short time we were together, I learned a good deal about the beauty of Islam—as it is today and as the Sultan and others demonstrated much as it was in the time of Francis. I was embarrassed by the cruelty of the Church as reflected in the leaders of the time. Francis stands as such a contrast. What a heritage he passed on to us in the Church today! I was pleased to see and hear friars Fr. Michael Cusato and Fr. Michael Calabria in the film. Jeff was most gracious in leading us all in the Peace Prayer. And it was humbling to hear outsiders, not once but twice, refer to us friars as “beautiful.”

Fr. Al Hirt, OFM
I saw two young people as I was greeting folks. I approached them and discovered two McNicholas High School students were there for extra credit. I know their teacher well. I then sat next to them during the event and told them they’d get even more points if they mentioned my name! Great of their teacher to encourage their participation in this event.

When the film comes to TV, I certainly want to advertise it, maybe host a viewing here. I’d love to get a copy to show here with our Newman Center students, sharing it with the broader UC community.

Fr. John Quigley, OFM
The documentary film was surprisingly well done. I liked it very much. I liked its strong correspondence with Paul Moses’ book, The Saint and the Sultan. The interviews were good and helpful. The treatment of current medical research on brain activity and violent behavior in warfare was especially relevant. The acting was believable, especially for a low budget film. It was a good evening all the way around.

Fr. Tom Speier, OFM
I was most impressed by our Provincial, who capped off the evening by coming up with the idea of reciting Francis’ Peace Prayer (which we all know is NOT Francis’). The poor guy was caught totally unawares that he would be called on, but quick-witted Jeff invited us all to join in the prayer in case he stumbled on a line or two – which he didn’t. 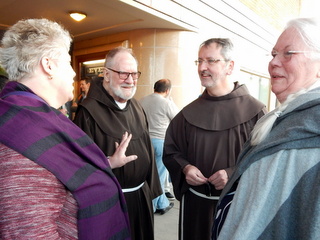 Fr. Pat McCloskey, OFM
I enjoyed the movie very much, especially the explanations by Michael Cusato, Kathleen Warren and Michael Calabria. I’ve known Cusato since the summer of 1975 when he was a novice and I was newly ordained; we were studying at the Franciscan Institute. Kathleen worked at Franciscan Media for a time, and I have met Calabria. I learned several things from this movie.

Fr. Carl Langenderfer, OFM
I found some of the historical details in the movie quite enlightening, but other details were surprising or confusing. In spite of the fact that scholars know that the “Peace Prayer” of St. Francis dates back only to the early 20th century in France, it played a significant part in the movie script. We see Francis quoting parts of it several times in the movie. Also, in spite of the movie being financed primarily by Muslim sources, all of the actors seemed to be white Europeans or Americans. I didn’t see anyone who looked Mid-Eastern or Muslim with darker skin or Arab features. Cardinal Pelagius was certainly an evil figure, seeking to wipe out the Muslims, even though they were willing to give Jerusalem to the Christians. He refused to listen to Francis on several occasions, in contrast to Malik-Al-Kamil, who was much more open to Francis.

Br. Tom Gerchak, OFM
What made the evening memorable for me was to have a woman, wearing a head scarf, come up to us outside as we were waiting for our car. She told us that her grandmother was a Lay Franciscan and wore a cord like those on our habits.

View the trailer for The Sultan and the Saint below.