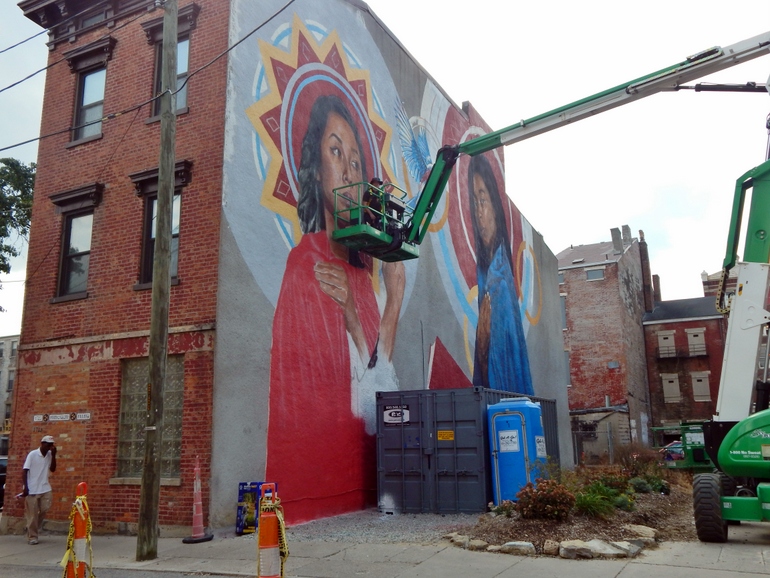 Blank and boring, the north side of Pleasant Street Friary was an empty canvas facing Findlay Market.

This week artists are putting the finishing touches on a mural that’s already attracting curious tourists taking selfies. They’re stopping to stare at a billboard-sized depiction of The Annunciation, executed with latex and spray paint, adapted from a scene in the apse of the Porziuncola. Nothing could be more Franciscan. And the friars are excited that their building is becoming an outdoor work of art.

The mural is one of eight new works created along Pleasant Street in Over-the-Rhine for BLINK, a four-day light and art event that will span 20 city blocks from Oct. 12-15. Friary residents Fr. Murray Bodo and Fr. John Quigley heard about BLINK from some of its reps at a neighborhood reception. With a mural in mind artist John volunteered, “We have a huge wall” that might be suitable for painting.

Luck and timing converged. “I know your wall well,” said a man from BLINK. “Why don’t we talk?” Once the building was approved for a mural, John met with Matthew Dayler of Xylene Projects to discuss the design. “I was insistent it would be spiritual/religious” and particularly Franciscan, John says. “He came back with a big book on Franciscans in Assisi”, full of artwork that did not suit the friary or the neighborhood.

“I don’t think so,” John told him. “If you really want to do something that will resonate with Franciscans, the painting of The Annunciation in the Porziuncola highlights the Franciscan spirituality of incarnation and would be evocative today.”

Using the fresco in the Basilica of St. Mary of the Angels as reference, Matthew and company photographed models sitting in the same positions as in the masterpiece by Ilario da Viterbo and went to work creating a scene that reflects the multiracial makeup of Over-the-Rhine. The painters expect to wrap things up in three or four days, in time for the Feast of St. Francis. But already, “People have been coming by and want to know about it,” says John, who’s having a metal plaque made that shows the original medieval Annunciation and explains the Franciscan connection.

It will also note that 2017 is the 50th anniversary of this friar community. And now Pleasant Street, a pioneering presence in inner-city ministry, will have another claim to fame.