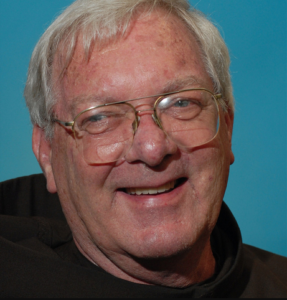 Last month when Bryant and his brother Bruce went to Thanksgiving dinner at San Juan Diego Friary in Albuquerque, “They had just bought a whole new outfit of clothes for Bill.” He seemed to be doing well. No one imagined he would be gone two days later, quickly and unexpectedly, after suffering cardiac arrest at the age of 72.

Bill died in the Southwest, where he served most of his religious life and where he retired in 2016 with friars of OLG Province. “He was a very quiet person, very frugal, with a dry sense of humor” that was often aimed at fellow friars. “He had all kinds of talent; he was a great guy, but very reserved until he got to know you.”

In later years, “I think he had a hard time figuring out where to fit in, at what friary. He lived for his dog, his friends, and cigarettes,” says Bryant, homilist for Bill’s Nov. 29 funeral at San Juan Diego Chapel. “Every place he was, he had just a few super-close friends and he kept in contact with them.” The death last winter of Odie, his beloved miniature dachshund, was hard for Bill to bear.

Bryant lived with Bill in Chinle, Emporia, Alamogordo and Albuquerque. “He did janitorial work mostly. In Alamogordo, he and Bruce shared the cooking during the week.”

In his early life as a friar, “He was a good tailor for the province. He made habits for a long time at Duns Scotus.” After Bill found a home in the Southwest, he never wanted to leave. “The only time he was back there [in Ohio] was when he took care of his mom” in the years before her death in 2002. Living in Centerville, he worked as a janitor at St. Anthony parish in Dayton.

Nov. 23 when Bryant and Bruce joined the friars at the motherhouse in Albuquerque for Thanksgiving, “Bill was there, looking fine in his new clothes and talking.” On Nov. 25, he was stricken at the breakfast table and died after being rushed to the hospital.

“The joke at his funeral was that we should bury him in his new clothes,” Bryant says. “But we buried him in his habit,” with the ashes of his dachshund Odie tucked inside the coffin.