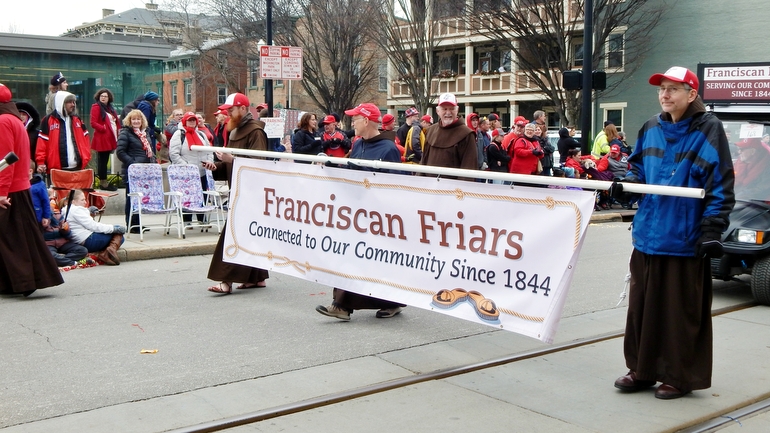 On parade day, it’s supposed to be springtime.

Tell that to hundreds of marchers huddled in the cold in Over-the-Rhine as they await the signal to start. That includes 10 friars gathered April 2nd for the 99th Findlay Market Reds Opening Day Parade.

It’s the fifth year friars have been involved, some walking, toting a banner and waving to sports fans lining the sidewalks, others riding the mile-and-a-half route downtown. It’s part of a moveable circus of floats, bands, horses, cool cars and costumed characters that signals the start of baseball season in Cincinnati.

Never mind that the Reds’ actual Opening Day was last week. Conflicts in the schedule with Findlay Market, Easter and Major League Baseball disrupted the normal routine. Now planners worry that the confusion over dates and the chilly temperatures will depress the turnout.

That may be, but it doesn’t dampen the enthusiasm of friars gathered in the spirit of fun and fraternity. Five of them are old hands at this, and five are rookies, making their debut.

Br. Tom Gerchak hasn’t marched in a parade since his days in the band at Horace Mann High School in Gary, Ind. Today he will not be playing the cornet. Fr. Max Langenderfer was in a Holy Name Parade as a freshman at Roger Bacon High. His instrument? “The slide trombone, of course,” says Max, who was so tall he could easily play over the heads of others. “Today is my re-entry into Cincinnati culture” after returning from Jamaica.

“I’ve been in about 15 Mardi Gras parades” in Galveston, Texas, Fr. Richard Goodin says. One year when a pastor wasn’t available, “I was the Grand Marshal.” Richard is here “to continue to raise awareness of the friars” and remind the public “that we still exist.”

Rookies Br. Tim Lamb and Fr. Bill Farris marched in Thanksgiving parades as Boy Scouts, Tim in Dover, N.H., and Bill in South Bend, Ind. Tim came today to display his “civic pride”. For Bill, “It gives witness to Franciscan fraternity; it strengthens the fraternity by doing something together. And we’re doing it for the Reds.” More than once he reminds fellow friars of their long history (since 1844) in Cincinnati. “We were here before baseball.”

Fr. Tom Speier, a lifelong Reds fan, is asked what nickname he would choose as a player. “Grand-Slam Speier’,” he says, recalling the golden moment in high school when he hit “my one and only grand-slam home run.” It was on Picnic Day at St. Francis Seminary. After he blasted the ball, “I didn’t know where it went. I just kept running.” As he rounded third and headed for home, “They were all there to greet me. I will never forget it.” 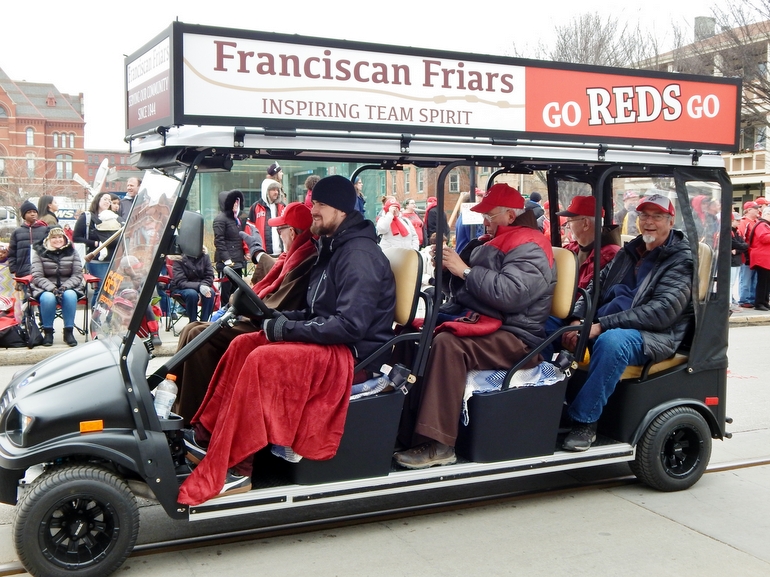 The friars were riding in style thanks to Gest Carts.

Among returning friars, Fr. Pat McCloskey and Br. Tim Sucher are batting a thousand in parade attendance since 2014. Relieved of sign-carrying duties this year, Pat can fraternize with the fans. Veteran marcher Fr. Carl Langenderfer drove in from Oldenburg, Ind. Today he’s riding with Br. Dominic Lococo and Fr. Tom Speier in a golf cart procured by organizer Colleen Cushard, who recruits the friars and arranges the event. The roomy cart was provided by GEST, the company that shuttles tourists around OTR. Driver Alex Gibson is pumped to be part of this. “I love what you guys do,” he says.

When the parade finally gets going – friars are near the end of the lineup – Br. Tim Sucher bounds into action like a politico at a campaign rally. Speed-walking most of the way, he glad-hands adult spectators and high-fives their kids, greeting an amazing number of them by name. Max is impressed with the peripatetic Tim. “He does a great job of connecting with the Over-the-Rhine people.” Many in them are bundled in scarves and blankets like they’re watching a football game.

As they pass Findlay Market, Richard is multi-tasking to beat the band. With one hand, he holds up his end of the Franciscan Friars sign. With the other, he’s alternately waving to spectators, taking photos with his phone and posting them to social media. This has to be a first.

As they cross Central Parkway, Franciscans are greeted with cheers of “Yay, Roger Bacon!” and “Hey, Brother Tim!” A TV reporter hops on the golf cart and conducts an on-the-spot interview with the friars.

“It’s a little bit of a jaunt,” rookie Tom Gerchak admits as they turn onto Fifth Street near the end of the parade. A few sturdy souls wave from the sidewalk, but most are watching behind the warmth of office windows or from the glassed-in skywalk overhead. “Even though the crowd size might have been down, the spirit of the people was happy,” Tom says. Bill was glad he could join “our communal celebration of our local ‘Rite of Spring.’”

At the P&G complex the friar team disbands, the golf cart headed north to drop off passengers and the two Tims bound for Arnold’s and a bite to eat. “It was fun,” says Richard, picking up the longest piece of the dismantled sign pole for the long walk back to St. Francis Seraph Friary.

Surely this yeoman effort qualifies him for Rookie of the Year, not to mention the MVF – Most Valuable Friar.

More videos from past Cincinnati Reds Parades on our Youtube page. 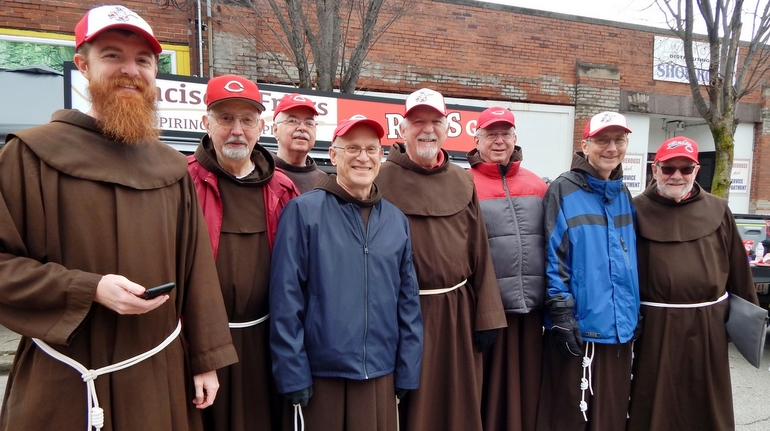 The Testimony of Easter