Standing up and standing together for immigrants 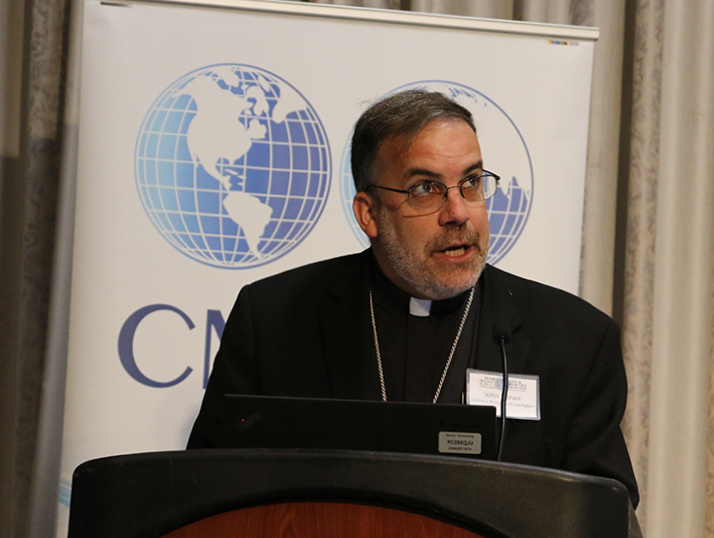 Nothing is more American than the stories of immigrants who risked everything to be here.

But Bishop John Stowe wonders what’s happened to that narrative.

“Who would believe that in the land of the free and the home of the brave, we would be so threatened by penniless, shoeless migrants who have traveled hundreds of miles to escape gangs, violence and brutal poverty?” he asked an audience last week at Xavier University in Cincinnati. One of more than two dozen speakers defending the role and the rights of immigrants, Bishop Stowe was part of a conference on “Promoting Just & Inclusive Communities in Ohio, Kentucky and Indiana”. The sentiment shared by participants is reflected in the Gospel of Matthew: “I was a stranger and you welcomed me.”

Organized by the Center for Migration Studies and sponsored by the Carnegie Corp., it gave 225 people of all faiths a chance to meet and an opportunity to brainstorm an issue that has divided our country. From July 16-18, scholars, researchers, community organizers, service providers, local officials, attorneys and religious leaders explained how diverse groups are working to meet the needs of immigrants and refugees. They talked about welcoming, integrating, and protecting immigrants, shared resources and promoted collaboration.

In his keynote speech Bishop Stowe, a Conventual Franciscan from the Diocese of Lexington, Ky., addressed the policy that led to the heart-rending separation of children from their parents at our southern border – and the resulting public outcry. “The ‘zero tolerance’ approach to immigration enforcement is only the latest step in a system that has been broken for decades,” said the Bishop, who was immersed in the issue while serving in El Paso, Texas, for 15 years.

“I’m profoundly disturbed that this kind of activity is needed in our nation at this time.”

Our new reality, one in which protections and guidelines have eroded, affects immigrants everywhere, said Bishop Stowe. “They live in fear of deportation, in fear of raids, in the fear that going to work on any given day they might be rounded up and their kids may come home to an empty house with no knowledge of where their parents were taken – as happened in two large-scale raids in northern Ohio in the same time period when our attention was focused on the southern border.”

The “demonization” of immigrants began with the presidential campaign and continues as the administration seeks “to dismantle the U.S. refugee program,” said John Koehlinger of Kentucky Refugee Ministries in Louisville, Ky.

Increasingly, immigrants are being “illegalized,” said Donald Kerwin Jr., Executive Director of the Center for Migration Studies in New York. Unauthorized border crossing is a misdemeanor punishable by a maximum of six months in jail, according to Allison Herre, an immigration attorney with Catholic Charities of Southwestern Ohio. Yet the government labels immigrants “rapists” and “murderers” to rationalize its harsh enforcement policies.

We need to “push back against that dialogue,” said Jessica Ramos, an attorney with Advocates for Basic Legal Equality in Dayton, Ohio. “The propaganda machine is waging war by labeling all these hardworking families as criminals.” In reality, “The vast majority [coming to America] are literally fleeing for their lives and the lives of their children,” said Brian Hoffman of the Immigration Justice Campaign in Akron.

“The most pressing thing is changing the narrative to reflect the true story,” said Fr. Chris Wadelton, a pastor who works extensively with the Latino community in Indianapolis. For example, stories of a “run” on our Southern border are simply not true, said Robert Warren, a demographer with the U.S. Census Bureau for 34 years. Since 2000, the number of undocumented crossings at our Southern border has actually decreased 80%.

What has increased is our nation’s dependence on the labor of immigrants. In Dallas, Texas, they make up 31.5% of the employed work force, said Elizabeth Cedillo-Pereira, Director of the Office of Welcoming Communities and Immigrant Affairs. What would happen if they all went away?

“Despite our nation’s need for immigrant labor – it could fairly be called an addiction – we do not have the political will to protect immigrants’ human rights,” said Bishop Stowe, or “to provide protection in the workplace, to provide a pathway to legal residency, to allow the people who are picking our produce, building our businesses and homes, caring for our children, tending our yards, processing our poultry , and doing the difficult work that many Americans will not do and do not envision their children doing – we don’t allow these decent and hardworking people to participate in society.”

And young people brought here with no choice in the matter are stuck in the middle. “I think all of us here have to believe in comprehensive immigration reform,” said José Cabrera, who is Immigration Program Organizer for the Intercommunity Justice & Peace Center in Cincinnati and a recipient of DACA, which temporarily protects undocumented migrants who came to America as children.

“Personally I hate being called a “Dreamer” because “the ‘A’ stands for Alien [in legislation that would create a pathway to citizenship],” he said. “The idea of being called a ‘Dreamer’ puts us in a box, reinforces that we don’t have a voice, we don’t matter, we can’t do certain things. If we continue to use it we reinforce the idea that undocumented youth are ‘less than’. The intangible thing is our dignity; we’re human beings, we have rights.” All that’s missing is “that little piece of paper that says we’re U.S. citizens.”

Panelists agreed: “The system we have is not working, and we need to think more humanely about the people who live in our country,” said Jessica Garcia from the Retail, Wholesale and Department Store Union, United Food and Commercial Workers in New York.

How can we help kids whose parents are detained? Encourage pro bono legal work? Promote social activism on behalf of immigrants?

What’s needed is “a whole of community approach”, according to Donald Kerwin.

Moreover, “How can our faith communities become the active moral fabric of our country?” asked James Buchanan, Executive Director of the Brueggeman Center for Dialogue at Xavier. “Compassion’s a great moral sentiment, but it’s meaningless unless we put it into action.” By working together, “Can we move a single bar a single inch?”

Quietly, groups like Catholic Charities of Southwestern Ohio are making a difference. Allison Herre described its impressive outreach: A Refugee Resettlement Service helps immigrants with access to doctors, interpreters and applications for benefits. Workers from its Su Casa program schedule office hours at apartment complexes housing immigrants. They help kids register for school and promote “Know Your Rights” presentations stressing family readiness if an agent from ICE (Immigration and Customs Enforcement) shows up at the door or a parent is unexpectedly detained.

While the government urges us to look south, “Family separation happens in Ohio every single day,” said Jessica Ramos. In Dayton they organize integration programs, offer legal advice and naturalization clinics, and share a Preparedness Guide for immigrants.

An abuse of rights affects everyone, said Karina Barillas, a native of Guatemala and Executive Director of La Casita Center in Louisville, Ky. “The minute one of us is victimized by injustice, all of us are.”

What’s critical, said Bishop Stowe, is “to humanize the issue of immigration,” especially by sharing stories of those who succeed. “When they have a face, a heart and a real story, it’s hard to see them as a threat.”

It follows, said Terri Morris Downs, Executive Director of the Immigrant Welcome Center of Indianapolis, that “As we get to know immigrants and refugees as friends and neighbors with the same goals or dreams, they become human.”

Fr. Chris Wadelton shared the story of 35-year-old Erika Fierro, the Indianapolis mother of two citizen children. She was brought to the U.S. at the age of 5 and picked up last spring by ICE because she and her husband Jesus had visited Mexico in 2007 and claimed to be U.S. citizens when they returned. Jesus was arrested as he left for work and deported to Mexico. The same sentence was decreed for Erika, who feared for the fate of her children. Her anguish and confusion were evident when newspapers and TV reported a prayer vigil led by Archbishop Charles Thompson and Sacred Heart friar Larry Janezic, pastor of Erika’s church. The images were unforgettable.

In caring for immigrants, we are heeding the call of Pope Francis to place ourselves “on the peripheries,” with those on the margins, Bishop Stowe said.

Why should we care? Because “We, too, were once aliens in a foreign land.”

(Bishop John Stowe’s keynote address is posted online at: http://cmsny.org/publications/stowe-cincinnati2018/. The text is also attached to this newsletter.)