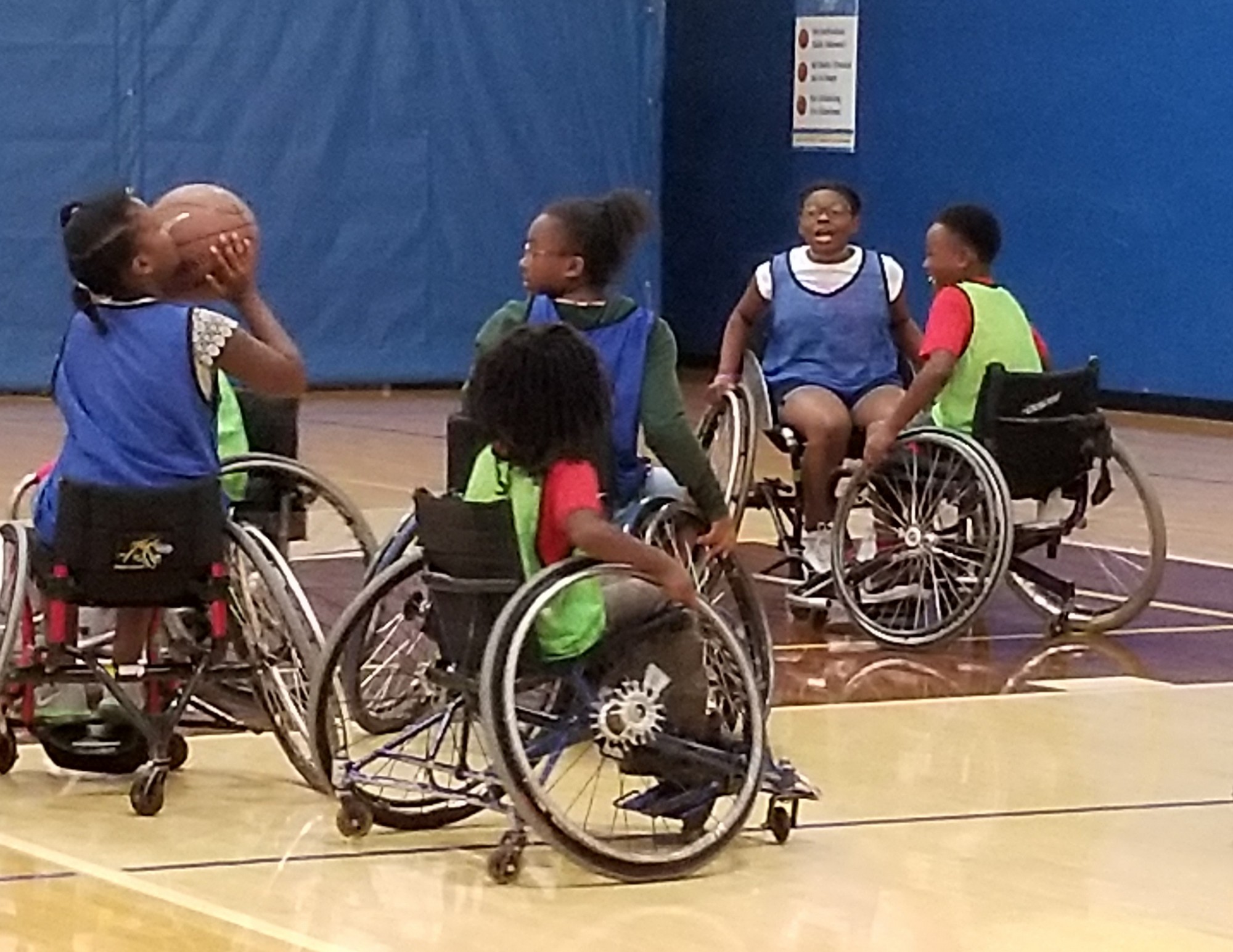 More than a game, it’s a lesson in living with disabilities

The words “disability” and “defeat” do not belong in the same sentence, according to Jake Counts.
Physically challenged people can do a lot of things, he says – and that includes playing sports. To prove his point Jake and his pal, Ian Smith, are staging a wheelchair basketball game at Friars Club in Cincinnati, enlisting children who normally run instead of roll.

None of the kids has ever been in a wheelchair. Some have never known a person who used one. And that’s the point, says Annie Timmons, Executive Director of Friars Club, a sponsored ministry of SJB Province. “Hopefully, they’ll realize how hard something like this is” for anyone to master. 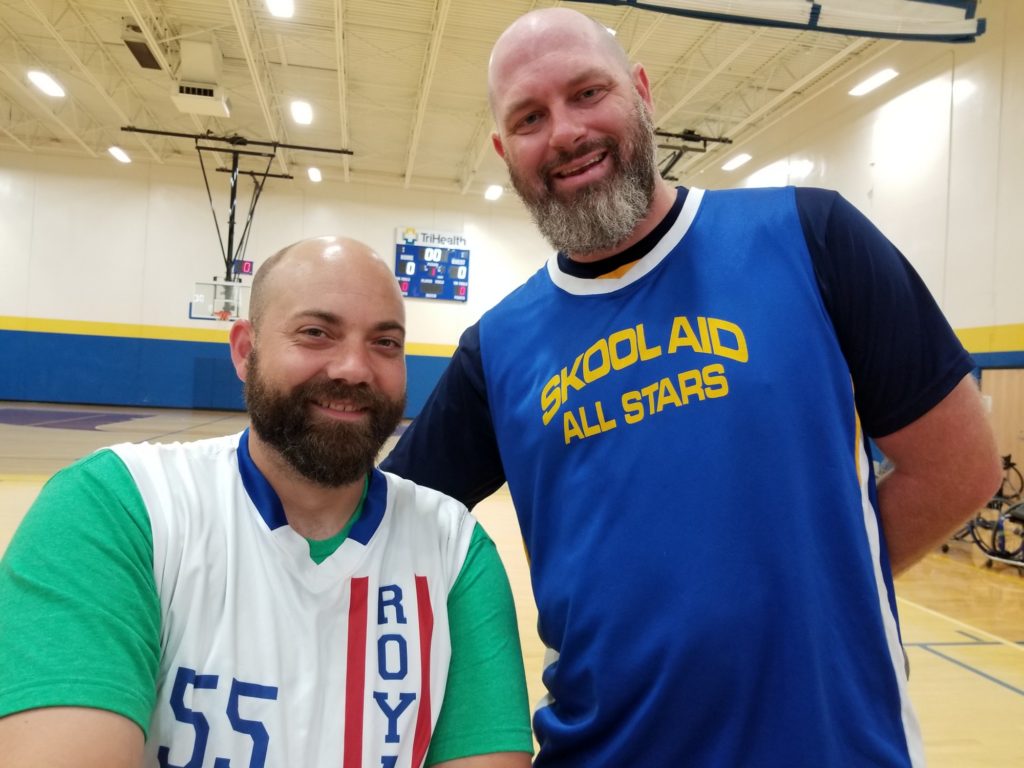 Jake Counts and Ian Smith ready to put kids through their paces.

Life lessons are part of Friars’ eight-week Summer Program for 5- to 12-year-olds from throughout the city and suburbs. It’s a camp experience without the travel or the mosquitoes – athletics, academics, field trips, arts and crafts – in a safe, supervised setting.

Today’s topic, Disability Awareness, is serious stuff. But to make their point, teachers must make it fun. That’s no problem for Ian, President/CEO, and Jake, Program Director for an enrichment program called Skool Aid, which expands kids’ horizons with music, fitness, creative arts, drama, tutoring and more. To lead this class Ian recruited Jake, a bilateral amputee who played professional wheelchair basketball and competed in the 2008 Paralympics in Beijing, China.

In five years they’ve held this class more than 120 times at Tristate schools and rec centers. “We’ve worked with up to 750 kids in a school assembly format,” says Ian. The program for this group of 40 starts with Jake sharing his story. Then kids will learn what it’s like to pass, dribble, shoot and rebound – all from a seated position.

With wheelchairs behind them and students in front, Jake and Ian set the mood with blaring music, an anthem to defiance by Jim Morrison and The Doors, Break on Through (To the Other Side). It’s bold, catchy, and very appropriate.

“We expect you guys to be listening!” exclaims Jake, making sure that kids attach a “Mr.” to his and Ian’s names. As he explains the loss of his legs 25 years ago at the age of 13 – he tried to hop a train and fell under it – his young audience is spellbound, reverentially quiet. “The rest of my body works fine,” Jake assures them. He says the accident crushed his spirit. But at the age of 19, the sports-loving teen made a decision. “I could focus on things I could do or I couldn’t do.” Cheered on by family and friends, he pursued a career in wheelchair basketball.

“Jake went from age 13 to 19 with no sports in his life,” says Ian. “We don’t want that for other kids with disabilities.”

Eventually, Jake learned “I could do just about everything I could do before the accident. I just had to learn to do things differently.” He demonstrates with his basketball-adapted wheelchair, a compact model built for speed and agility with a low-slung back and inward-slanting wheels. The design minimizes the impact of collisions, Jake says, drawing whoops and squeals from the kids with a series of hairpin turns and sudden stops.

Curiosity
“We’ll take questions,” says Ian, and those directed at Jake are predictable:

• “Have you tried prosthetic legs?” (Yes, but he prefers a wheelchair.)
• “How do you drive a car? (With levers attached to the gas and brake pedals.)
• “How do you go to the bathroom?” (“I can pretty much do whatever I need to get around,” Jake says, hopping between two wheelchairs with surprising ease.)
• “Did you ever crash into anyone?” on the court. (“That’s why we have bumpers in front on the chairs,” Jake says. Ian jokes, “If any of you have feet, make sure they are tucked inside” during the game.)
• “Have you ever played one-on-one with Jake?” Ian is asked. (“He would whup me, his arms are so much stronger than mine,” Ian says.)

As they explain the rules – chair fouls are one major difference – teams are formed, with Friars coaches Mikayla Chess and Brianna Colbert leading the charge and Annie acting as ref. Quarters are abbreviated to allow everyone time to play. It’s the green team vs. the blue team, with Jake and Ian on opposing sides to even the odds.

“Make that music loud!” Ian orders the scorekeeper, who obliges with an onslaught of tunes by rappers Drake and Cardi B.

Strapped into wheelchairs, kids quickly learn how much energy and coordination it takes to play this game. “Oh, man!” shouts a frustrated boy as he struggles to propel the chair and pass the ball. Sideline spectators and coaches are in perpetual motion, some shouting directions – “Catch it!” “Shoot it!” – and others gyrating to the music.

Making it look easy, Jake weaves around teammates, dribbling the ball in back of his chair, speeding down court and tossing a layup through the hoop. It’s not so easy for the kids. They’re great at passing, but when shot after shot falls short, they wail in frustration.

Rebounds are a mess. At one point, five wheelchairs are logjammed in the rush to retrieve a loose ball. In the fourth quarter, it’s 13-12 in favor of the green team, and Ian rallies his blue troops. “All right; we’re only down one point; we can do this. We need to work together. Make sure you’re open!”

Ready to take her turn, Annie Timmons climbs onto a wheelchair and enters the game. It’s 18-17 with two minutes to go, and Jake takes a long shot. He scores! Ian comes back with two baskets in a row. Alone down court, Annie waits for a pass, ready to make an easy shot. But no! Ian swoops in and steals it.

The score is 24-24 as the buzzer sounds. “We’re gonna go to overtime!” Ian announces. “Whoever scores first wins the game!” Mikayla and Brianna fight for the tipoff. Teams scramble for the ball, arms flailing, wheels churning. The ball is recovered and passed to Alyse Smith, a scrappy 11-year-old in cornrows. She’s ready. Leaning back in her wheelchair, she heaves the ball toward the basket with all her might.

Whoosh! There is pandemonium as players from both sides surround Alyse with whoops of joy. “Nice shot!”

Game over, kids congratulate their opponents with hand slapping and fist-bumping. Later, before they leave, Jake and Ian gather their teams for some parting words.

Face it, Jake says. “Something bad’s gonna happen in life. But also in life, you’ll have positive things to focus on. You can build on that.” And you can help others do the same.

“I would like to put it out to you,” Ian says, “to be a friend if someone is going through a hard time.”

Jake elaborates. “As you go through life, you’re gonna have a lot of pressure to put people in ‘boxes’.” Don’t do it, he says. “You’re gonna have more in common with that person than you think. When you hear talk about ‘THOSE people and us’, remember those differences are what make our community cool.”

Asked “What was most challenging?”, the kids have ready answers. “Dribbling!” “Moving the wheels AND dribbling!” “Dribbling and shooting at the same time!”

Children take for granted that everyone can walk, Annie says. Tomorrow she will ask them, “How would it feel if you had to do this all the time?”

Pitch in for the kids

Since 2011 Skool Aid has mounted summer and afterschool enrichment programs for children in Greater Cincinnati and Northern Kentucky. They aim to foster good behavior and help kids develop new interests and talents in an atmosphere of fun. Donations are welcome, and teacher/presenters are always in demand: http://www.skoolaid.com/contact_us.php

The Summer Program at Friars Club is fueled by donations and the work of volunteer tutors and coaches. If you’d like to help with next year’s program, please e-mail Ben Klayer (bklayer@friarsclubinc.org) or call 513-488-8777.