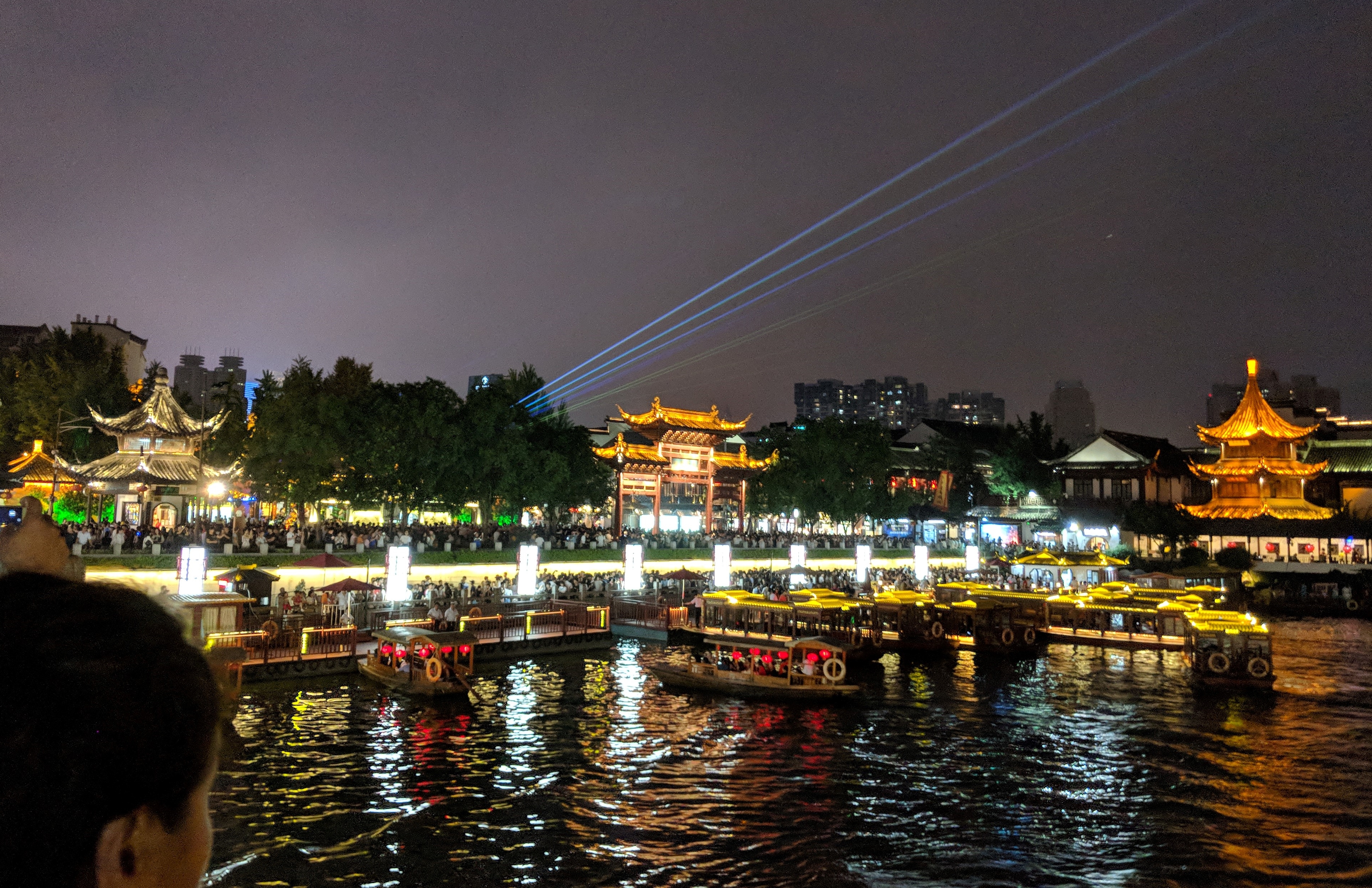 This summer, John Boissy could have given his brain a rest. Instead, he took on the academic Olympics: He went to China and studied Mandarin Chinese.

Inspired by his Asian heritage and the desire to learn the language for ministry, Br. John took a class last year at DePaul University in Chicago. When he returns to the school next month, he’ll skip from first- to third-year Chinese thanks to his intensive summer course in Shanghai.

Asked to describe the program of study, John calls it “rigorous.”

And how. He and seven other students from DePaul spent seven weeks at Fudan University, immersed in Chinese culture, exploring Chinese landmarks, and learning the nuances that make Chinese so fascinating – and frustrating.

“It was one of the best experiences I’ve ever had,” he says. 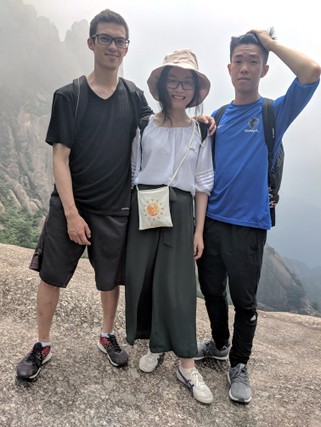 John with Zhang Li and Victor Ma at Huangshan.

Almost as pleased as John is his mother, Ying Boissy, a native of Taipei who moved to the States in 1989. A retired product researcher for Procter & Gamble, she’s one of more than a billion people – 20% of the world’s population – who speak Chinese as their first language.

But for years the language held little appeal for John, raised in Cincinnati with Ying and with his American-born father, Raymond Boissy, a dermatological scientist at UC before he retired. “From the time I was a couple years old, we would go to Taiwan to visit my grandparents every three years or so until I graduated from high school,” John says. “I remember loving the food; I would always gain a couple of pounds.”

His Grandma spoke no English; Grandpa knew only a few words. “We couldn’t communicate verbally, but they always wanted to be around me. My mom really wanted me to learn Chinese, but it was all foreign to me at that point.”

That eventually changed, Ying says. “The more obvious time John regretted not speaking Chinese was my father’s 90th birthday. All three generations went back to Taiwan. John was the only one who didn’t speak Chinese. He felt like an outsider.” 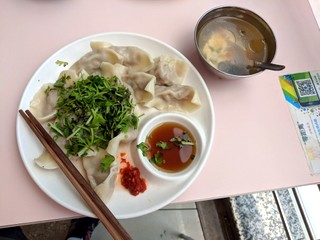 Anxious to learn, John signed up for Chinese Language at DePaul. “When I started studying, one of the most difficult things was listening skills. You would hear and learn words and phrases and speak them and write them.” But sentences and conversation were tricky.

“Tone is another thing to get used to,” says John, who describes the difference between a flat, high-pitched tone, a rising tone, a falling and rising tone, and a falling tone. Confused? Chinese has far fewer syllables than English, so tones help convey meaning. Change the tone of the word that represents “to sleep”, for example, and you’re saying “dumplings”.

As for characters, those intricate, elegant building blocks of language, John has learned about a thousand of them (there are thousands more). “Chinese characters evolved from symbols,” says Ying. Penmanship matters, according to John: “Each character has a certain order of strokes, what mark comes before the other” when you write it down. If a character has two sides, his mother says, “One side is always meaning and the other side gives you pronunciation.”

When John showed Ying the work he did in the second quarter of school, she was underwhelmed. “I learned that in the second grade,” she told him.

John persevered. “I started going to a Chinese parish in Chicago’s Chinatown.” And when he heard about an option offered by DePaul – “You could go to Shanghai in the summer to fulfill your second year of language” – he jumped at the chance. 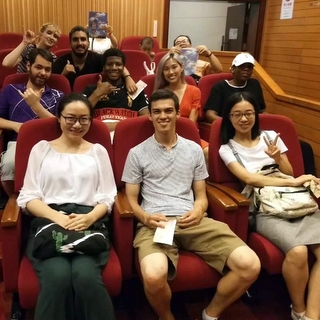 With 24 million-plus residents, Shanghai is one of the most populous cities in the world. “Being there physically is overwhelming in a good way, but a lot to take in. I just couldn’t believe I was there,” he says.

Prestigious Fudan is among China’s “C-9” universities, one of its most elite schools. John stayed in the International Student Dorm on a campus where more than 33,000 full-time students are enrolled. “I was one of two [from DePaul] in the second-year class; the other six were third-year students,” including his roommate. “I felt it pushed me to learn.”

Five days a week, students met for three-and-a-half hours. “We’d usually begin by going through a vocabulary lesson” and repetition drills with the teacher. “After that we’d go through three-minute skits [they wrote themselves] and make up sentences. Then we met with a ‘language partner’ for four days a week” to help with grammar and sentence structure. “We had afternoons and evenings to study. We were graded every week, with a quiz on Fridays.”

“Plenty of times,” he says. 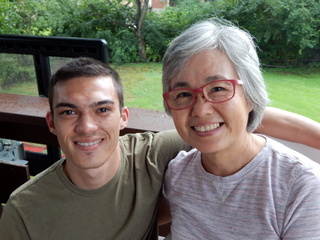 John with his mother Ying

Among “extra activities” were Tai Chi, Painting and Calligraphy. Weekends were free, “and we had two adventures out of the city,” one to temples and museums in the ancient city of Nanjing, and another to Huangshan, the mystical Yellow Mountain. “I love mountains and hiking. I loved going there.”

His mother visited last month, and his dad came near the end as John studied for final exams that were “really intense.” The teacher had them learn 120 characters on the spot. “We had to know grammar. They gave us a written portion; there was a paragraph to read and we had to answer questions about it in Chinese. We also had to write an essay. After that was an oral exam” on one of three topics the teacher had previewed.

How did everyone do? “The final grade is based on how much we improved and how much effort we put into it,” John says. “If that’s the case, we expect to get an ‘A’.” 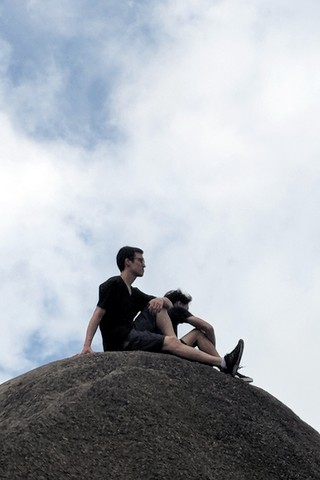 What was most memorable? “Definitely my classmates. We all got close and helped each other” on a demanding journey. In the beginning, “Even things I knew like names and ages, I was getting stumped on. By the end I was able to pick up more, understand more, and have conversations with clerks at checkout counters. I was more confident; I was able to say Chinese off the top of my head without having to prepare ahead of time.” When his dad came to visit, “I felt like a pro.”

Where this will lead remains to be seen. After graduation John, a talented carpenter, hopes to attend woodworking school in Boston. “I would love to use my Chinese in a parish or community,” he says.

The summer in China was life-changing. “One of my classmates and I were talking about languages,” John says. “We all express what we see or feel through words. When we’re able to speak to someone in a different language, it gives us a different perspective; we see what words mean to someone on a different side of the world.”

And what words mean to someone much closer – like your own mom.