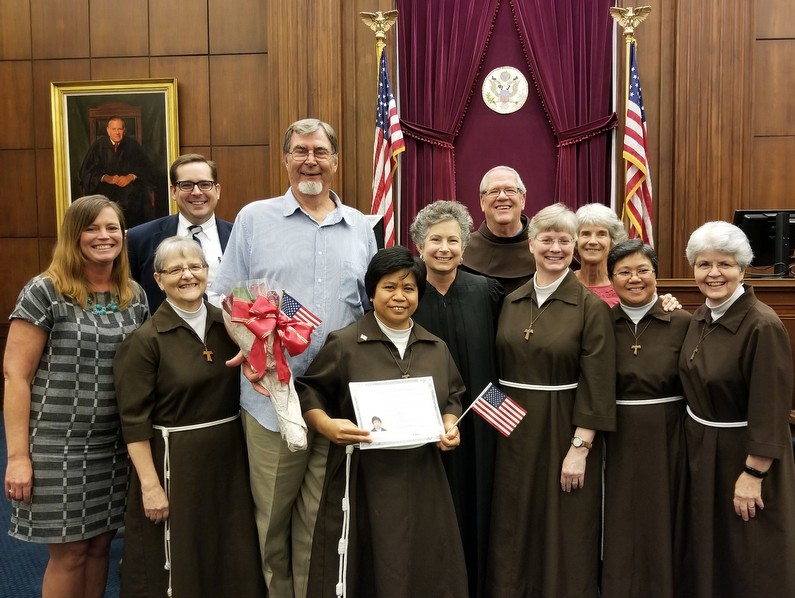 For millions of Americans, citizenship was not bestowed at birth. They had to work for it.

We are reminded of this as Poor Clare Sr. Luisa Bayate, a native of the Philippines, takes a seat in the courtroom of U.S. Magistrate Judge Karen Litkovitz. Since landing on these shores in 2010, Luisa has pursued the same dream as the 68 men and women surrounding her in United States District Court in downtown Cincinnati. She wants to be an American. 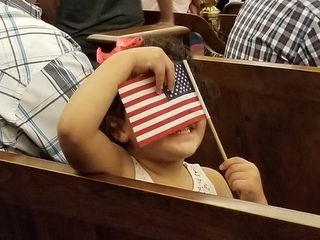 When she takes the Oath of Allegiance at today’s Naturalization Ceremony, she will have the rights and privileges that most of us take for granted, including the right to vote. To ensure that 69 new Americans are ready for the Nov. 6 elections, the League of Women Voters is here to register them on the spot.

Watching proudly from the audience are some of Luisa’s friends and her Franciscan family, Poor Clare sisters and friar brothers Tim Sucher and Max Langenderfer. For Sr. Pia Malaborbor, also from the Philippines, the process is familiar: She’s been a citizen since 2014. For all of them today’s date is fortuitous, cosmically consequential. Luisa will become a citizen on Oct. 4, the Feast of St. Francis.

But there’s a last-minute problem.

“We are asked to go [to the courthouse] at 12:30 for the final processing of the ceremony,” Luisa says. “Good thing that we arrived on time because when it is my turn to be checked on the list to be naturalized, the court clerk can’t find my name on the list. I am not on the list! How it happened, I don’t know.” 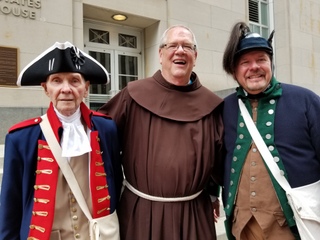 Br. Tim Sucher with Sons of the American Revolution who attended the ceremony.

They consult another clerk who responds, “How did I miss it? I can fix this,” then leaves the room in a hurry to make Luisa’s Certificate of Naturalization just one hour before the ceremony. “They asked me to be Number 69 and be seated on the last chair of the line,” Luisa says. “They said, ‘We will call you when your certificate is ready.’ It was a nerve-racking moment for me.” At the last minute, “I finally saw the clerk show up in the courtroom again with my certificate. I am IN! It was like a ‘perfect joy’ moment for me.”

Meanwhile, in this wood-paneled courtroom where conflict and drama are more typical, kids of every nationality bounce up and down or play peekaboo as their parents turn and wave from the seats up front. Grownups move about freely, striking up conversations with families they’ve never met. Today they have something in common – pride in how far their loved ones have come.

In 2016, 752,800 people became naturalized Americans. Ceremonies like this happen in almost every county and city in the United States. They are poignant, powerful reminders of civic responsibility. 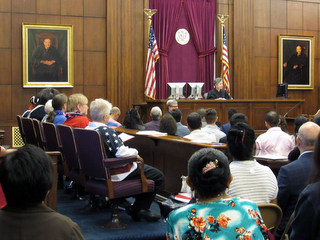 Soon-to-be Americans in the courtroom

Today is about the 69 people from 32 countries whose journeys took years and brought them thousands of miles from the places they were born, from Afghanistan to Zimbabwe, from Bhutan to Togo. To get here they applied, studied, underwent interviews and passed a battery of oral, reading, writing, history and government tests that would flummox many of us. Most seem happy but nervous as they wait to stand and introduce themselves. Some are grinning from ear to ear.

“This is a wonderful afternoon,” says Alberta Hemsley of the League of Women Voters, welcoming the future citizens and their families. Passing out forms, she walks them through the process of electoral registration. In a few minutes, all are registered to vote. And you can bet they will.

The striking of a gavel signals the presence of Judge Litkovitz. The naturalization clerk hands each applicant a tiny American flag provided by the Federal Bar Assn.

“We welcome each of you to the American family,” says the judge. “By being here today you have shown your commitment and willingness to take responsibility for American citizenship. American citizenship is a great gift ….we must remember the sacrifices of those who’ve gone before us.”

Interrupted by a toddler yelling “Mommy!”, the judge laughs along with everyone else.

One by one the applicants rise to state their name, country of origin, and number in line. They finally reach the end: “My name is Luisa Bayate, I’m from the Philippines, Number 69.” 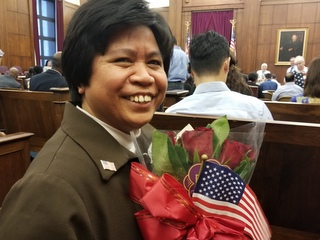 Judge Litkovitz announces they are “qualified in all aspects to be granted U.S. citizenship,” and administers the Oath of Allegiance. Right hand raised, all of them promise that, among other things, “I will support and defend the Constitution and laws of the United States of America against all enemies, foreign and domestic; that I will bear true faith and allegiance to the same…..so help me God.” Even the smallest tykes stand as the judge then leads the room in reciting The Pledge of Allegiance to the flag.

Representatives from Senators Sherrod Brown and Rob Portman convey their good wishes. “It isn’t just a ceremony, it’s a celebration,” reads the letter from Sen. Brown. “We are a nation of immigrants. All of you here today embody one of our nation’s greatest strengths. It’s not where you come from that makes you an American; it’s your dedication to America. I would like to congratulate each and every one of you and welcome you home.”

Before distributing certificates, Judge Litkovitz shares her own story. “I am the granddaughter of Italian immigrants who came here in the early 1900s.” She holds aloft their well-preserved immigration papers. “I can only imagine how proud they would be to see their granddaughter preside over a ceremony to naturalize citizens.” 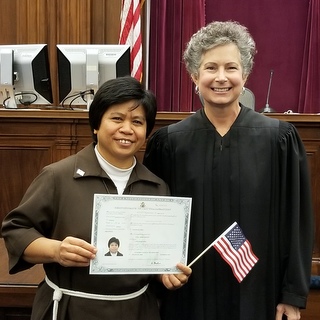 The judge hands each new citizen a Certificate of Naturalization and invites their families and friends to come forward for photos. When his number is called, a young man from Italy throws his arms in the air. Afterward, Tim Sucher says to him, “I didn’t see the faces of all the people, but you seem to be the happiest person in the room.” The new American assures him, “I am SO happy! I am SO happy!”

When they eventually get to No. 69, a small army accompanies Luisa to the judge’s side, including her immigration lawyer and a friend from the TSA she met one day when they struck up a conversation at airport security. Her contingent is by far the largest of the day.

After nearly an hour of photos and conversation, the judge, still smiling and gracious, asks which Franciscan Order they represent. She says presiding at this ceremony never gets old. “This is the best part of my job.”

As the courtroom clears, Luisa clutches her certificate and thanks guests for sharing this amazing experience. “What a day to celebrate the Feast of St. Francis.” She also has a request: “Please pray for me that I may be faithful and be a good citizen to my new country that God has given me.”

For one Poor Clare and 68 others, this isn’t the end of a journey. It’s just the beginning.