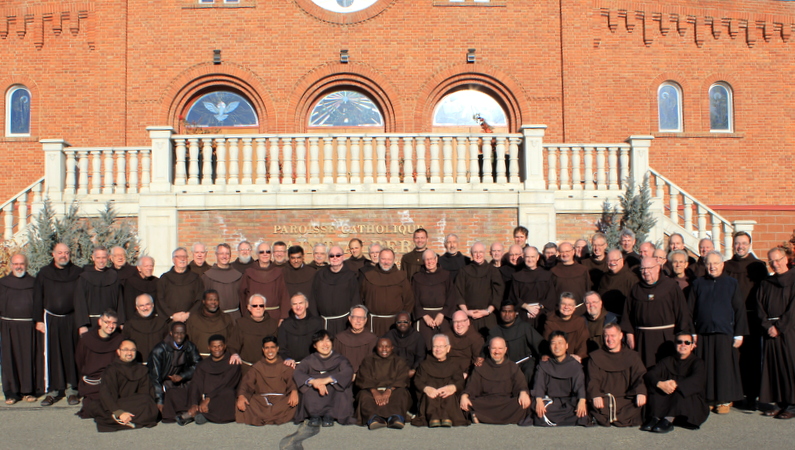 The friars of Holy Spirit Province, Saint-Esprit, with some of their guests

As friars gathered to celebrate the Chapter of Union in Canada, one elder brother intoned a simple chant from Taize. Soon the whole community was awash with harmonized voices. It was amazing, a quietly powerful way to symbolize the coming together of two provinces: St. Joseph Province of Eastern Canada, French speaking, and Christ the King Province of Western Canada, English speaking. 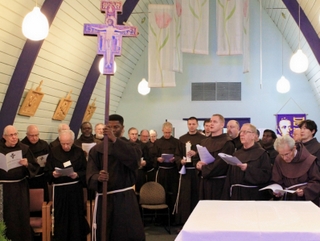 Minister General Michael Perry and Caoimhin Ó Laoide (ESC General Definitor) were deeply involved in the proceedings Monday evening in St. Albert, Alberta. Joining guests from across Canada and Canadian bishops for this historic occasion were four provincials from the U.S.: Tom Nairn (Sacred Heart); Jack Clark Robinson (OLG); Jim Gannon (ABVM); and myself. Pat McCloskey (ESC Secretary), Ed Tlucek (Councilor, ABVM), and Steve Malkiewicz (ABVM) were also present. And our own Eric Seguin made the journey from Montreal! The evening prayer service at St. Albert Church was full of friends of the friars, Secular Franciscans and Sisters of every stripe. Clearly the Lesser Brothers are known in this area.

Language is a big deal for these two merging provinces. Headphones were handed out the first night with detailed instructions on how to use them. After the Latin Taize singing subsided, the presentations began in both French and English. The report of the General Delegate, Peter Williams, was eagerly received. He spoke of the difficulties for some in this union, but said most of the friars were energized by this opportunity. He named many of the strengths of this warm, hospitable, multicultural and uniquely Canadian brotherhood. That seemed right: Even though the friars from the U.S were not officially part of their Chapter, we were made to feel right at home. Clearly we were brothers to each other. They made quick approvals of the rules of order for the meeting, as well as provisional statutes that had been distributed earlier.

The formal Foundation of the Province would wait until Tuesday morning. With the drama of proper ceremony, the Minister General read his own Decrees which received the approval of the General Definitorium to suppress both of the provinces. The Provincials were invited to stand and return the seal of the province to the General. Then Michael Perry released them from all their duties as Provincials. But you could feel the brothers lean in as the next decree approved the erection of the new province of Canada: the Province of the Holy Spirit, Province Saint-Esprit, with the Provincial Curia at La Resurrection Friary in Montreal. And then there was the naming of the first Provincial Minister for this Province, Pierre Charland, Vicar Provincial Robert Mokry, and Councilors Jean-Pierre Ducharme, Guylain Prince, Aimé Dô Van Thông and Daniel Gurnick.

The Minister General then spoke about the service of authority, of leadership among the friars. The Holy Spirit, whose name the new province has taken, gives gifts for the good of all. We are followers of Him who came to serve, not to be served. Michael spoke of the rapid change that we are experiencing globally, in society, and in the Order. We are much more diverse than ever before. It is the Spirit that delights in such diversity, and helps us to respect and fraternally correct in the midst of such diversity. He encouraged all of us not to forget our identity as Friars Minor and remember that we have a primacy of a life with God; that our fraternal life must be authentic, sober and simple; that we have a creative way of evangelization from our primitive life – sharing as poor, itinerant brothers of penance with those who are poor and marginalized. 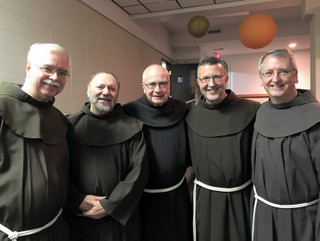 That same theme of identity was shared in the comments by one of the three archbishops at the evening prayer service. He spoke of a young person who found his deeper identity by simply walking into a church. It’s easy to lose our sense of who we are; spiritual amnesia is what I call it. The Archbishop reminded us that in this period of purification we will rediscover what is essential and who we are – children of God.

Naturally, between the grand ceremonies were parties or dinners. We are friars, after all! And the conversation was dotted with laughter, with some serious sidebars. The reception on Tuesday evening went late, as people were clearly glad to see the friars and archbishops and have the opportunity to hang out with them. Pat and I left the next morning – heading to Chicago for Visitations and a Symposium on Duns Scotus, sponsored by the Duns Scotus Chair that was funded by our province with proceeds from the sale of our college of the same name.

What a powerful time to be a Friar Minor! 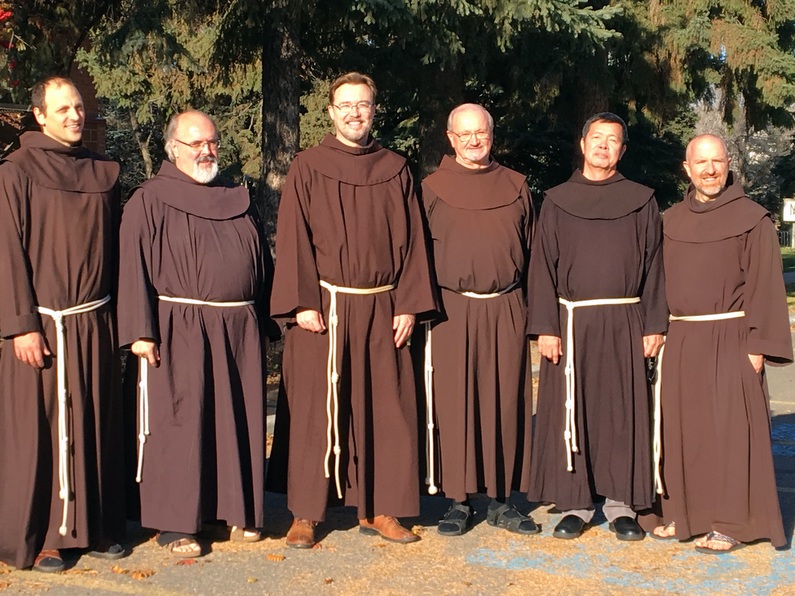