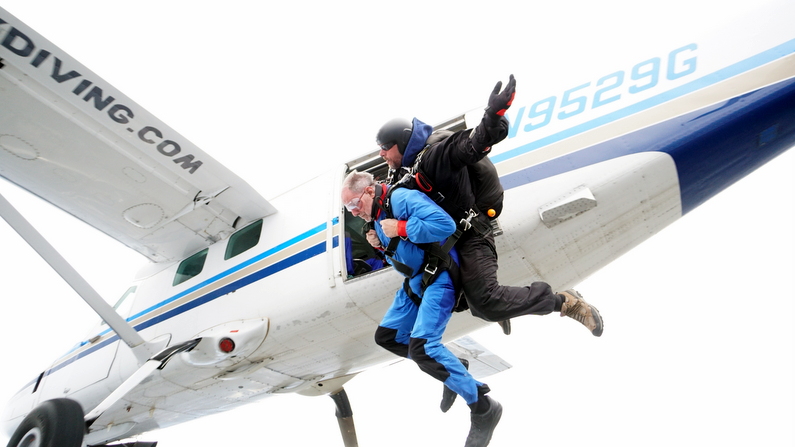 You fall from an airplane two miles up and plunge to the ground. What could possibly go wrong? Undaunted by this prospect, friar Tom Speier is making his first parachute jump. “It’s on my bucket list,” he explains. And he’s not getting any younger.

At 86, Tom is not the oldest person to do a tandem jump with Start Skydiving at the Middletown (Ohio) Regional Airport. “The oldest we’ve had is 94,” says Office Manager Ashley Sauter. For some, a jump is a quirky gift for a birthday or Christmas. “Most tell me it’s on their bucket list.”

Tom is probably a good candidate. He is innately curious, which led him to study Biology and travel the world leading Franciscan Spiritual Direction Programs for 18 years. (Once you’ve stared down a Black Mamba snake in Zambia, skydiving is nothing.) And he loves sports of all sorts.

Hearing of Tom’s plans, Provincial Minister Mark Soehner wished him luck. Vicar Bill Farris asked if his affairs were in order. Today, Nov. 4, Tom is at the airport filling out a form labeled “Agreement”, a euphemism for “Waiver”. It includes phrases like “assumption of risk”, “release from liabilities” and “covenant not to sue”. 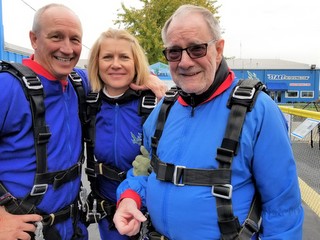 Somehow he talked Province Nurse Michelle Viacava into joining him. Here to show solidarity is her friend Bill Bresser, also scheduled to jump. “I have a bucket list to do a pilgrimage walk,” says Michelle, who would just as soon be elsewhere. Tom told her, ‘You’re supportive, so you’re going with me.”

The target time is 12:30 p.m. But planeloads of parachutists are ahead of them, and wind and clouds have slowed things down. “Clouds have to be a certain height” for safe jumping, Ashley says. “We can jump under but not through clouds,” since visibility is a high priority.

The rookie jumpers cross the wind-whipped field to a staging hangar to “get geared up,” as Ashley calls it, then stop to look as people point. In the distance, parachutes float from the sky as gently as milkweed fluff – a lovely sight.

Inside the hangar, Diego Guitierrez gathers the unfurled parachutes to re-pack canopies, safety-checking rigging for the next flight. “You have to make sure lines are in proper order, there are no holes in the canopy and the fabric is out of the way of the lines,” he says, which should reassure Tom, Michelle and Bill. 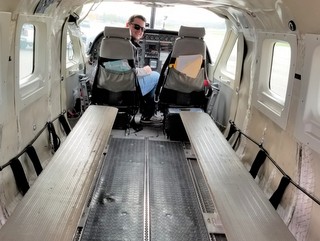 Most of the six customers in their group are tandem-jumping, harnessed to instructors who will guide them from freefall to landing. Recent returnees eagerly share their stories. “Awesome!” one says of the experience. “Breathtaking!” says another. A young man compares skydiving to “drop tower” amusement park rides. “Those are scary; you feel as though your heart is about to stop.” But with skydiving, “It feels like you’re floating.”

“They’ll call your name when they’re ready,” Ashley had advised, so eyes are fixed on a digital board flashing the names of the next jumpers. While some pace nervously, Tom chats up the staff.

He started his bucket list last year, he says, “reasoning that the end is coming. I want to get this in before I go home,” as in, home to the Lord. A hot-air balloon ride was also on the list. Tom crossed that off when he was told, “You’ve got to be able to jump off a kitchen chair” to do it.

To preserve the experience for posterity, Michelle and Tom have each purchased a “media package”. A videographer will record their pre-jump jitters, accompany them on the plane, jump alongside, then shoot the freefall and landing. Recording an intro to the video he asks, “Who here is the most frightened?” and Tom and Bill point to Michelle.

After two hours of waiting, it’s time to go. Introducing themselves, their jump partners pull blue flight suits from a rolling rack. They’re kind of cool – think Tom Cruise in Top Gun – but hard to get into. Judging from Tom’s face, the harness is as uncomfortable as it looks. “This is the most strenuous part,” his partner assures him. 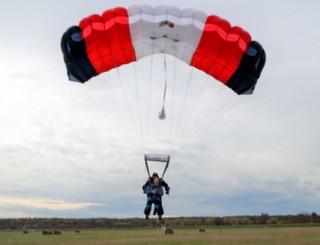 Tom says he is prepared for this “because of all my travels around the world. This is nothing compared to Victoria Falls” in Zambia, where bungee-jumping is popular. He had the chance to try that, too, “but I backed out of it when I found out a woman did it the day before and her neck snapped.” Yikes.

There is basic instruction for jumping – more like falling – from the plane. Partners will signal when to fold arms, and when to bend knees. The free fall lasts about 40 seconds before they deploy the chute, and the descent time depends upon the altitude.

The videographer records the suited-up trio. “Is this your first jump?” he asks. Tom nods. “It’ll make you young,” the guy assures him. There are jokes about tangled cords and failed parachutes, then they all come together for prayer or supplication.

Outside, pilot Brian Woolfenden taxis Lady Liberty, a single-engine Cessna Caravan, to a stop for loading. Rookies and coaches pile in, facing backwards, straddling benches on either side. Tom and his partner board last; they’ll be first to jump. Engine noise precludes conversation during the 15-minute climb, which is just as well.

Instructors strap themselves to jumpers, who will “wear” them like oversized backpacks. “Two minutes,” Brian yells to the back of the plane. The cabin door slides open and cold air rushes in. 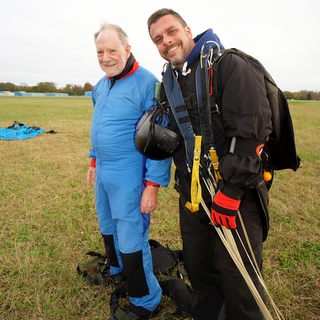 As Tom and his teacher scoot to the edge of the door, their videographer bails first, ready to capture the action. They topple after him, then things move quickly. Soon it’s Bill’s turn, and Michelle’s, and in a matter of seconds the plane is empty, bouncing from the buoyancy of a 3,400-pound weight loss. In the distance, parachutes burst open like blossoms.

The plane descends as jumpers on the ground emerge from heaps of crumpled parachutes. Michelle is ecstatic. “It was great. I loved it. You felt free. It was beautiful. I’d do it again.” Bill says he was thinking about “doing everything right” on the way down, ‘holding my head back, pulling my legs up” for landing.

Tom, who looks a bit green, admits to feeling airsick and wishes he’d brought Dramamine. As a result, “The free fall was kind of a blur,” he says. “But I liked coming down and looking around; the foliage was beautiful.” The highlight was an aerial view of the AK Steel plant where his father used to work.

As the three trade stories, Tom is planning his next adventure. “I’d like to do a zip-line,” one of those downhill plunges from a pulley attached to a rope. After you’ve survived an 11,000-foot fall, how hard can it be? 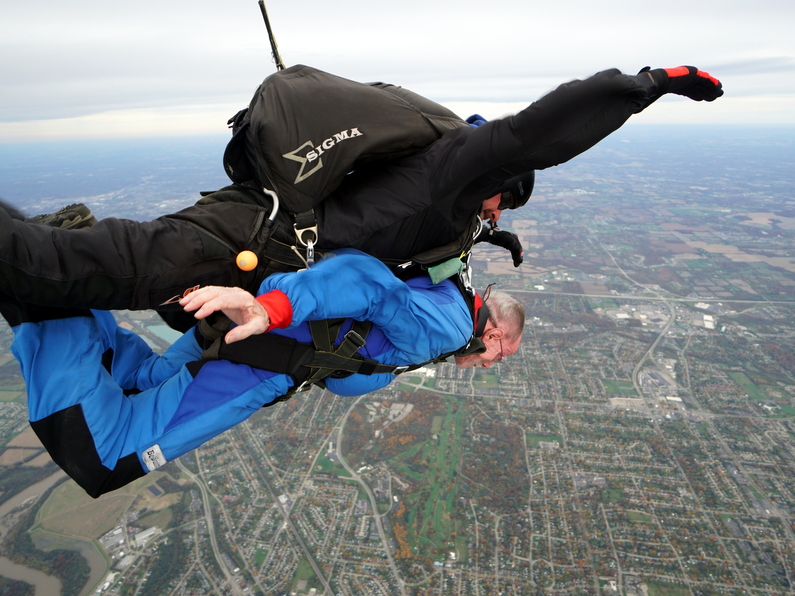