Faith, family, and the search for Santa 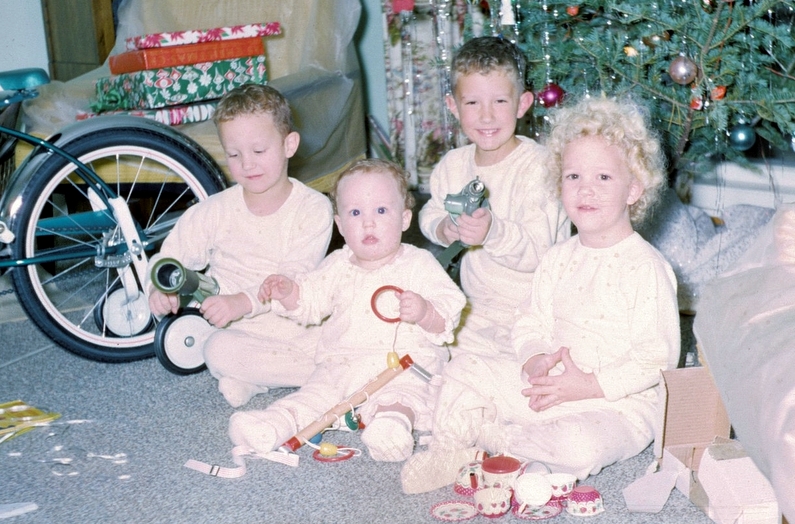 Fr. Mark, second on the right, and his siblings play with Christmas gifts from Santa.

When the air gets cold and the winter clouds hang low and purple overhead, my memories go to the expectation that we felt as kids regarding Christmas. My father had a way of heightening this expectation on Christmas Eve. That evening involved a simple dinner, some easy-to-make spaghetti and meatballs, certain to be consumed by kids.

Then we were layered with warm clothing, boots, and our winter coats and hats. All the children would pile into the station wagon on our annual hunt. We were going to look for Santa! My father would tell us that there had been sightings in the area. My mother would encourage us to go along with Dad. But she was always too tired to go, or dishes still needed to be washed. She never accompanied us.

Once this magical hunt began, we looked in the obvious places. My father would point out Christmas displays gleaming in the cold winter night with starry lights. He might suggest, as we slowly rolled around neighborhood after neighborhood, that he heard sleigh bells. Or perhaps he saw a shadow move around the corner of a house. Of course we looked at every roof for telltale signs of the sled, or even reindeer tracks. Nose prints and hand smudges would appear on the car windows.

Visions of GI Joe and Pop-O-Matic Trouble games danced in our heads. We would manage to roll through quite a few neighborhoods, looking at the light displays, but always ended at our local church. There we’d reluctantly trudge out into the cold to see the baby Jesus tucked into his manger crib. My Dad would kneel down, bow his head and pray. We were restless. Didn’t he know that we shouldn’t be wasting time like this! We had a Santa to catch.

After what seemed like an eternity, we completed the slow roll back home. By then, we were chomping at the bit to see whether he had been to our house yet. For some reason Dad rang the doorbell to our own home! Strange. And when we got in, it was clear that we had, in fact, missed Santa. Arranged under a tree that sparkled more brightly were packages, bows, huge boxes, or a couple of times, a bike! Mom could be found in the kitchen, finishing up. We would run in to persuade her to come into the living room. Did she see Santa? Did she hear anything? She would frequently say, “Well, I did hear some rustling around.” Once, she said she heard sleigh bells.

It took years in my own faith to eventually see that the real present was of my own Dad’s faith, his simple way of expressing it, his hope that we would catch on. I had parents who encouraged me to be vigilant for God hidden in unlikely places. Mom’s complicity in the mysterious magic pointed even more to the shimmering Presence that underlies everything.