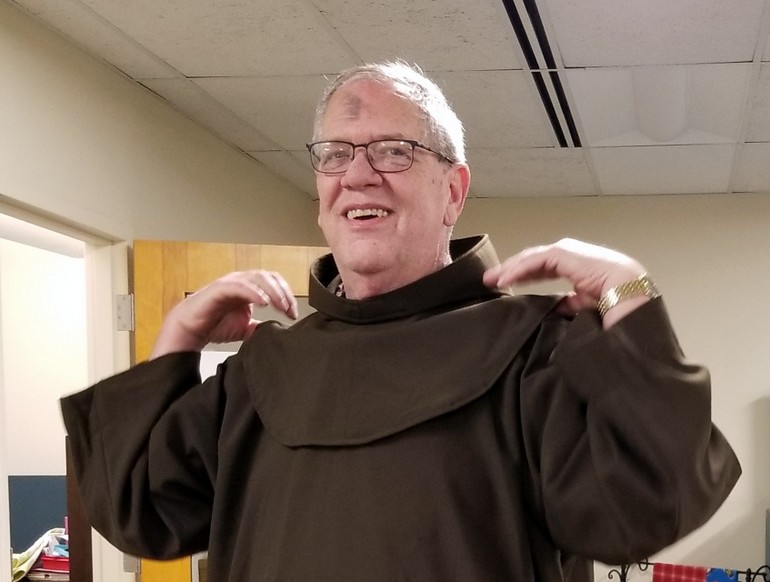 Br. Tim Sucher tries on his new habit made by the tailors of the Sarah Center

Nobody ever said it was easy

When you’re making a habit, a crooked seam is no big deal. Just pull it out and do it again. 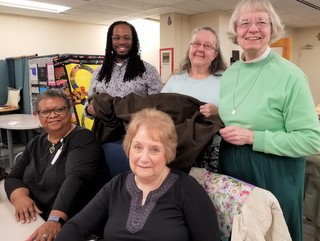 “We’re great rippers!” boasts Virginia Marie Meyer on behalf of the five tailors sitting around tables at St. Anthony Center in Over-the-Rhine. Today, as they complete their first Franciscan garment, they admit that the learning curve has been steep.

“It’s more complicated than it looks,” says Rita Gray, adding the finishing touches to a cowl embellished with neat rows of crosshatch stitches. “I thought it would be a challenge for me,” says Judy Melish, who has been sewing since she was 10. “I didn’t realize it was going to be THIS challenging.”

Leading the project is Lois Shegog, Director of the Sarah Center, a program of St. Francis Seraph Ministries. Known for creating distinctive jewelry and handmade quilts, they’ve built a close-knit community by encouraging women to develop their strengths and skills. Last year Lois picked up the habit-making baton from Poor Clare Sr. Rita Cheong, who was ready to retire after 16 years of crafting more than 200 habits for friars in several provinces. 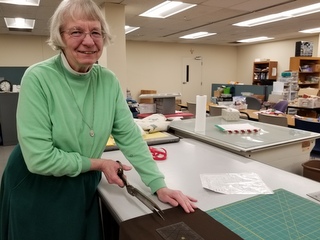 “It did not take me many months to become comfortable with making habits,” says Sr. Rita, a fashion major in college who worked in the industry for 10 years before entering religious life.

It took this crew slightly longer. “This was different than anything I had ever done,” says Lois, a quilting virtuoso.

Approached by the friars to make and repair habits, she wondered, “How am I going to meet and teach people how to make this interesting garment?” The answer: Recruit a team through church bulletins. “Many people can serve communion. Not everyone can sew.” Her group jelled last summer and has met the first and third Saturday of most months, with a break for the holidays. 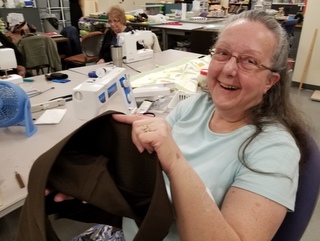 Virginia Marie, from Our Lady of Visitation Parish, learned “serious sewing” through 4-H, starting with pincushions and working her way up to making habits for sisters of the Handmaids of the Precious Blood. “The challenge for habits is getting the measurements right,” she says.

Rita Gray made all her own clothes in high school and college and has sewn quilts for the homeless and mended vestments for her parish, St. Matthias in Forest Park. “It fills a need to make a garment that’s practical and durable,” she says of the end result. Besides, “Most of our sewing is for women. This is an opportunity to sew for men.”

According to Judy, whose parish is St. Vincent Ferrer, “The invitation in our bulletin was meant for me. I had retired a few months prior and was looking for a volunteer opportunity.” After years of making clothes, she turned to quilting for the Pregnancy Center East. “I enjoy the creativity of sewing, that I can put my own stamp on it.” 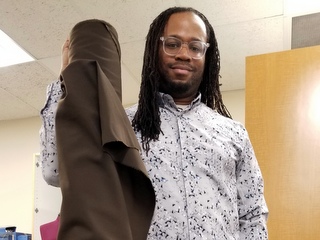 Julian Collins is here because “I am friends with Lois,” who admits, “I begged him to come.” Julian, a member of St. Peter’s United Church of Christ, enjoys sewing and “wanted the experience of making something I hadn’t made before. And I see this as service to the community-at-large.” He also does the heavy lifting, dragging around 50-pound bolts of cloth and cutting fabric with scissors as hefty as hedge clippers.

Another recruit left early on, Lois says. “She saw all the detail and said, ‘I can’t do it.’” Volunteers were warned, “This is not for the novice sewer. It will bring your skills up a notch.”

For those who stayed, says Lois, “It’s such a learning experience.” But the project has done more than boost their sewing skills. “I’ve enjoyed the camaraderie of the group and working together to problem-solve,” says Rita Gray.

“Every week we’ve learned the next step or two,” says Judy. “It’s been a team effort.” 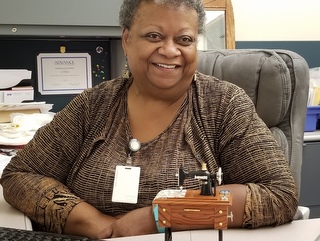 The process began with training that sounds like boot camp. “I met with Sr. Rita two days a week and she coached me on how to do it,” Lois says. “She was tough. She showed me how to work with different sizes, how to cut it appropriately, what kind of table and scissors to use. I was overwhelmed with the intricacies. The hem has to be at least 3 inches deep. You have to consider the way the fabric flows. There are different qualities of the fabric,” depending on the blend of wool, cotton and polyester that’s used. “Some friars are allergic to wool. Others like a little more warmth.”

Sr. Rita turned over her precious patterns and a trove of fabric – five bolts, enough to make more than a dozen habits at 6-7 yards apiece. Guardian Frank Jasper donated fabric from St. Clement’s, a legacy from yesteryear’s friar tailors. Lois also inherited a loose-leaf binder of measurements for 150 brothers. Calling it “My Book of Friars”, she handles it as gingerly as if it were The Dead Sea Scrolls. 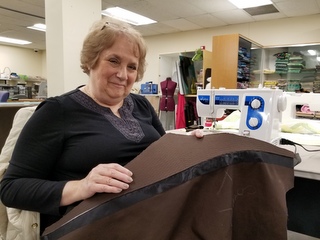 When the proper thread was found – it’s called “Cloister Brown”– work began on the “training” habit, earmarked for friar Tim Sucher. After they took nine measurements, there were choices to be made: Pocket in sleeves? Pocket or slit (or nothing) in sides? Pen pocket on front top? Clasp or Velcro for the throat closure? “Velcro disintegrates in the dryer and collects a lot of hair,” Lois says. “Some friars want a button, so that means a buttonhole.” She figures, “They don’t get many choices on this thing, so they may as well be comfortable.”

Team members practiced by making all the parts, including the cowl, which was everyone’s trial by fire. “It’s like a real puzzle to put it together,” Lois says. Multiple pieces of fabric backed with stiff interfacing are cut and joined with precise, cross-hatch stitches. The “point” draping the back must be perfect, with no puckering. “Then we have to launder and dry it for an hour” so it shrinks before the friar tries it on. 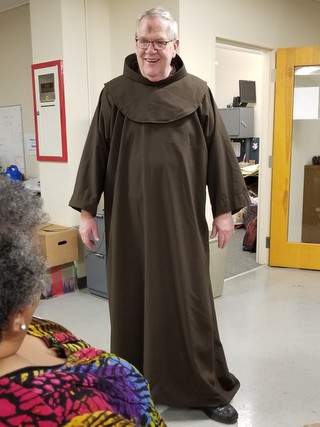 Some of the tailors took work home, with arms, cowls and pockets tucked into craft boxes so they could spend extra time on the precision work. When Julian finishes the hem, they’ll be ready for a final fitting.

On Ash Wednesday, Tim stops by the Sarah Center to pick up his habit.

“We added some fabric in the back” where it was snug, Lois tells him as he pulls it over his head.

“I love it,” Tim says, looking for a mirror. “My favorite thing is I now have an eye and hook instead of Velcro” at the neck. “Velcro wears out and it never comes together.” The habit hangs a bit long, but “the cord will take some of that up,” Lois says, and washing should make a difference.

Lois sighs with relief. That’s one done, and, God willing, many more to come.

Learn more about the Sarah Center.