They came to play on Opening Day 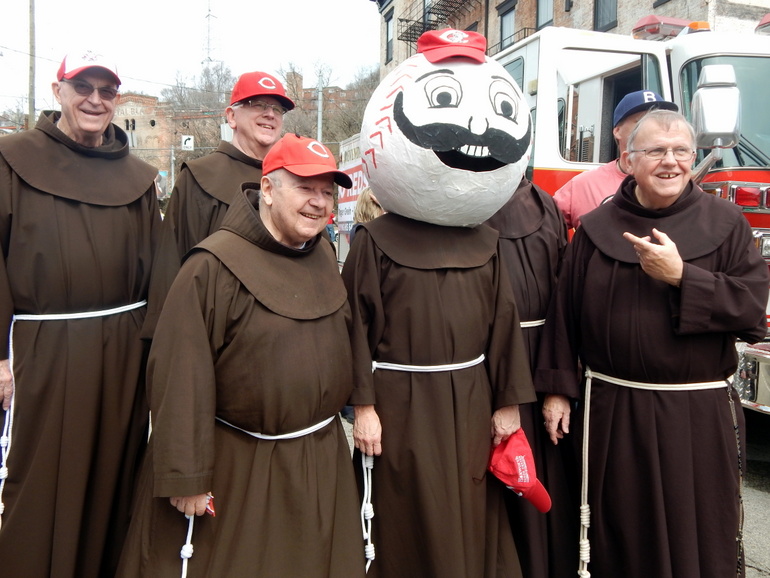 There they are, walking among dozens of baseball-themed bands, clowns, horses, puppets, dogs, celebrities, fire trucks and floats blaring “Put me in, Coach,” from the John Fogerty song. Friars would seem to be an anomaly in the Findlay Market Opening Day Parade. 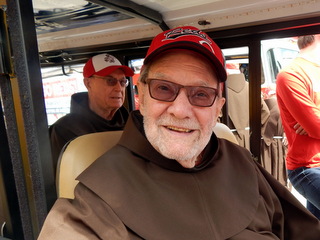 But with their cord-wrapped sign that says, “Connected to Our Community”, they fit right in. Marching in the parade is about being a good neighbor, something they’ve been to people of Over-the-Rhine since 1844.

Staged near the site where friars first settled in Cincinnati, the Reds’ parade is a circus in the streets. It’s always chaotic, as humans and animals scramble to find their places among almost 200 entries. This year, the 100th anniversary of the event, the chaos starts early.

March 28, the morning of parade day, two friar participants had to cancel at the last minute. The others meet organizer Colleen Cushard at St. Francis Seraph Friary at 11 a.m. to make their way to their spot, far back in the parade lineup. While some set off on foot, others needing a ride wait for the electric golf cart that will take them six blocks to Elm Street, then transport them the mile-and-a-half route of the parade. 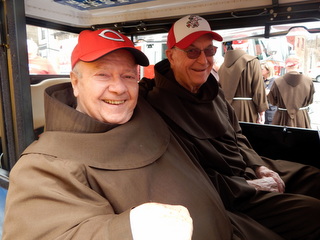 Minutes tick by, but the cart is nowhere in sight. Many phone calls later, they learn their cart was in an accident. A substitute cart showed up at the wrong place. With roads blocked off and crowds jamming the streets, friars will have to walk to the starting point.

On this mild spring day, perfect for a parade, they don baseball caps and head west, passing food vendors, miniature ponies and bands warming up on flatbed trucks. A red-wigged clown named Barrels dances up to Fr.Tom Speier. “How are you?” Tom asks politely, extending his hand to the white-gloved performer. Steps away, someone in a gorilla suit jogs past Fr. Fred Link.

After stopping off at Pleasant Street Friary, they walk the last two blocks, around a corner redolent with the smells of popcorn, sausage and waffles, and find their spot on Elm Street near the end of the parade. It’s next to an Evendale Fire Dept. truck and behind a float for Bombay Grocery that features a papier-mache temple surrounded by glittery parasols and Indian food laid out on gold-fringed shawls. Quite impressive. 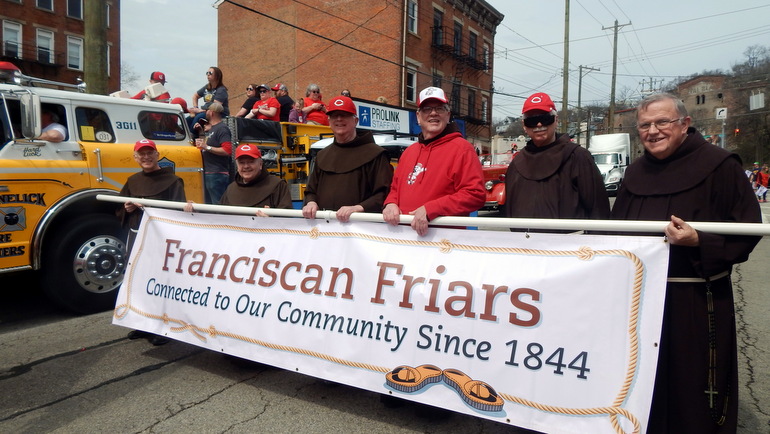 The golf cart that will carry some of the friars is here, but it doesn’t have the Franciscan signage they were expecting. This year they will ride in a cart that promotes a temp agency. Coincidentally their amiable driver, UC student Oliver Acomb, attends Mass at Fr. Al Hirt’s parish, St. Monica-St. George. “I haven’t been to the parade since I was a kid,” says Oliver. 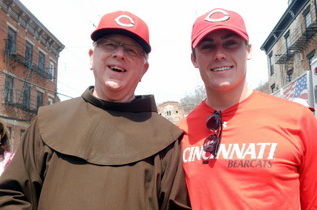 At noon, the waiting begins. Walking in the parade is fun. Waiting to walk in the parade is not as much fun. Many blocks south, the action is underway. But it may be 1:30 before the people and animals in this section start moving.

In the meantime, friars mingle with people from nearby cars and floats. Photos are taken by curiosity-seekers intrigued by the habits. Fr. Bill Farris, former Roger Bacon President, talks to students at the nearby Chatfield College float. Earlier, he found several friends from the Greenhills American Legion Post 530 Concert Band, with whom he played the trumpet. Apparently the friars know everyone here, and vice versa. 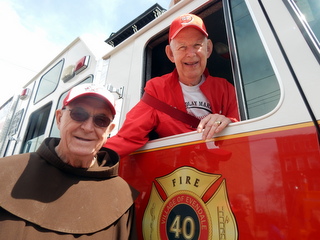 The truck’s proximity is helpful. When a friar trips and falls, cutting his cheek and chin on the pavement, they rummage through emergency supplies for a bandage.

Jennifer Vollmer, a fire fighter for 13 years, is asked about her work. “It’s something different every day,” she says. “You actually feel like you’re making a difference, being able to help people who are calling us on their worst day.”

One friar – the ultimate good sport – dons an enormous baseball head and gamely poses for pictures. There’s time to shoot video in which friars answer questions like, “Who’s your favorite Reds’ player?” and,“What position would you play on the team?”

When they get the signal to march, Colleen helps friars assemble the pole for the vinyl sign they will carry. 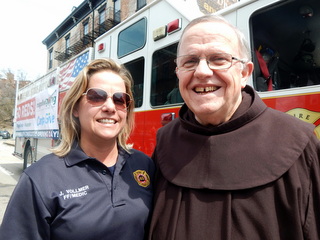 John, Fred and Tom climb into the golf cart, with Oliver behind the wheel. Known by many for his ministry in Over-the-Rhine, Br. Tim Sucher is already in high gear, glad-handing kids at the curb, waving his arms to pump up the crowds lining the street. “Go Reds!”

Friars respond to waves and shouts of recognition all along the parade route, from Findlay Market to the P&G Plaza. Near Washington Park, one observer says, “Look, there’s Fr. Al Hirt. He’s such a great guy.”

Watch the parade interviews on our Youtube page We Are Franciscans.

Franciscan Joy: Take me out to the ball game

Season over, it’s time to play