Planning a future for the Shrine 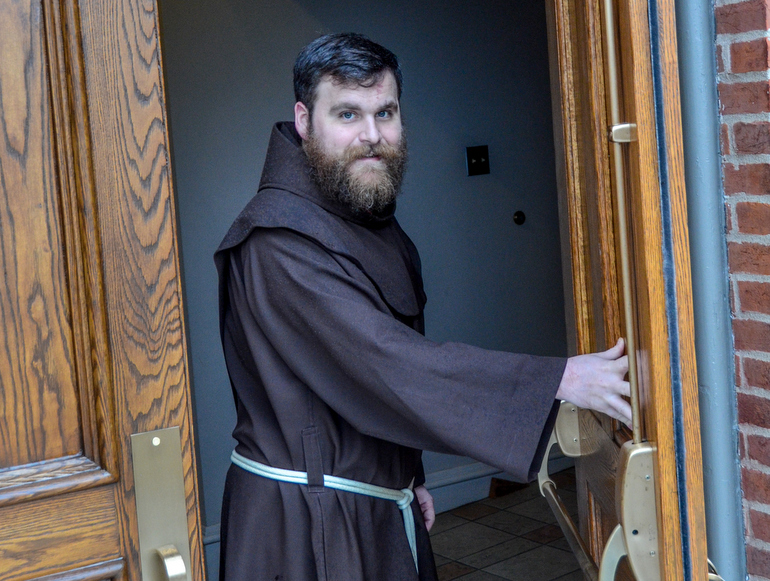 Fr. Clifford Hennings, standing at the entrance to the St. Anthony Shrine, is the Director of Shrine Ministry

Friar Clifford Hennings was 21 years old when he first saw the National Shrine of St. Anthony.

He remembers it as though it were yesterday. 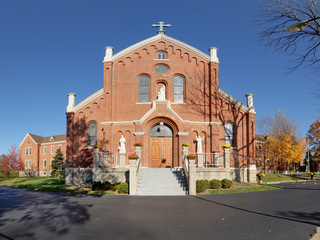 The St. Anthony Shrine in Cincinnati

“It was a ‘Come and See’ weekend,” he says, “my first visit to Ohio,” when Vocation Director Don Miller drove him in from the airport. “The chapel was hidden from view,” up a steep driveway off winding Colerain Avenue in Mt. Airy. Perched on the hill was a classically handsome brick building encircled by vast lawns and stately trees.

That weekend Clifford walked the sweeping grounds around the Shrine and friary, praying as he paused among the statues. From the beginning, “It almost had a nostalgic, comforting feel, like a place I had been before. The surroundings had an impact on me even before I knew the friars.”

Twelve years later he has returned in the newly created position of Director of Shrine Ministry. It’s a role he is struggling to define in a place that, since the 1880s, has welcomed hundreds of friars in formation and thousands of pilgrims who are passionately devoted to St. Anthony. No longer a novitiate or a postulancy, it now houses a community of friars and welcomes worshippers on Sundays. There’s room for a lot more ministry, says Clifford. 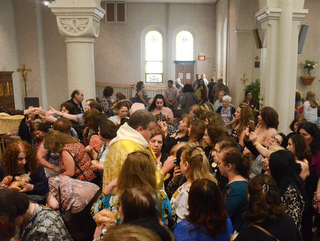 Fr. Colin King surrounded by pilgrims on the Feast of St. Anthony

“I have plans,” he says, then amends that to, “Some are plans, and some are dreams.”

For Clifford, who is also part-time Associate Pastor at St. Monica-St. George, this is a delicate dance. He is constrained by time, by lack of manpower, by perceptions about what the Shrine has always been. “What keeps the place going is the status quo.”

But in the changing world of friar unification and possible closings and divestitures, the status quo may not be enough. That makes Clifford both a promoter and a protector, motivated partly by “fear of losing this place.” And the Shrine’s quietly impressive reputation won’t save it.

What will? “We have to be able to say something is going on here,” he says. “How can we improve things? How can we get more people here” – and make it more of a center for spirituality? 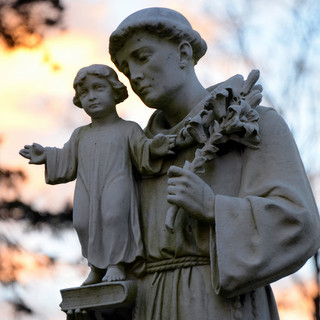 St. Anthony statue near the edge of the woods.

In Clifford’s opinion, there is much to build upon. “Thousands of people send prayer requests here” in the name of St. Anthony – preacher, teacher, finder of that which is lost. More than 4,600 prayers were beamed to a monitor in the friary last month. “So many come to St. Anthony Day,” with local devotees joined by six or seven busloads of exuberant pilgrims each year.

Clifford would like to stoke and channel that enthusiasm. “Last year was the first year I’ve done St. Anthony Day, and there was no liturgical plan.” The logical question is, “How do we make this liturgy a worthwhile concern?”

One of his early projects was an Advent Speakers’ Series mounted last fall to attract visitors. The follow-up was a three-part series of Lenten reflections that ended April 10. On May 10, the Shrine will host an opportunity for interfaith dialogue with the viewing and discussion of the docudrama film, The Sultan and the Saint.

When Clifford lived here as a postulant, “The grounds were particularly inviting. I would often sit and watch the deer in the field behind the Vocation Office.” Since “people who have been coming here for years or for the first time appreciate the grounds, what can we do to capitalize on that? People see it but they don’t engage with it. Nothing entices you to use it.” 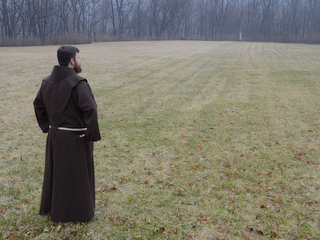 Fr. Clifford looks out upon the field to the St. Anthony statue near the woods.

For starters, “I would like for the field to be transformed into something a little bit more,” perhaps by adding native plants and a walking path. “This spring I want to do something simple. It would not be hard to put Stations of the Cross in the woods.”

The Shrine is a hidden treasure – especially at night. “Another practical thing would be to get a sign that lights up, with a spotlight on it” to guide drivers from Colerain Avenue into the complex.

Clifford would love to do a First Friday Mass. “I’d like to have a Healing Mass at some point. And some sort of informative presentation on the life of St. Anthony.” For now, “When I’m planning things, I don’t schedule too much. We just don’t have the people” to pull it off. “I still work at the parish.” Here, “I’m only one person, part-time,” with no staff. Fellow friars at St. Anthony are semi-retired or busy from dawn to dusk. As for his own limitations, “I’m an idea person. The money side is not my strong suit.”

To spread the word about Shrine events among Shrine regulars, “I put together a simple little newsletter” with a reflection on one side and “Opportunities this Lent” on the other. “I’ll do that seasonally with major announcements.”

A sign of Clifford’s hope is the declarative sentence on the back of the newsletter:
“More events to come!”

It shows what one person can do. He can get something started.

(Fr. Clifford Hennings is the Director of Shrine Ministries and Associate Pastor of St. Monica – St. George Parish in Cincinnati) 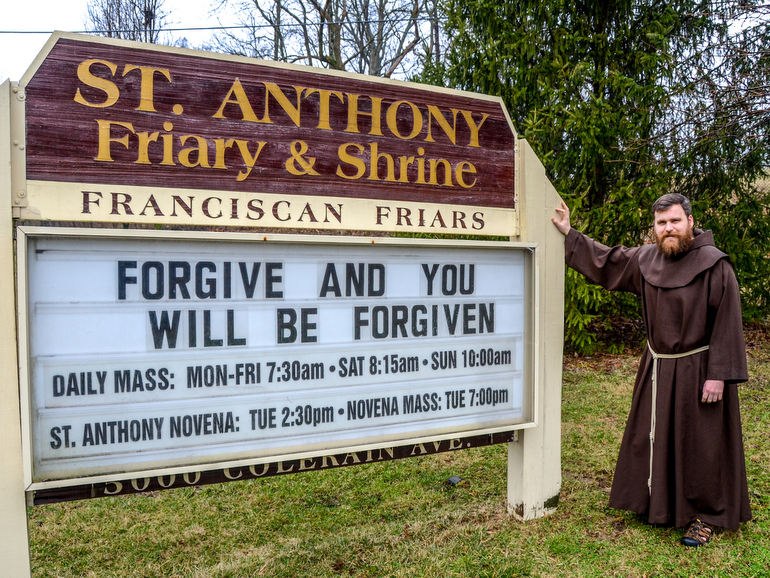 Season over, it's time to play