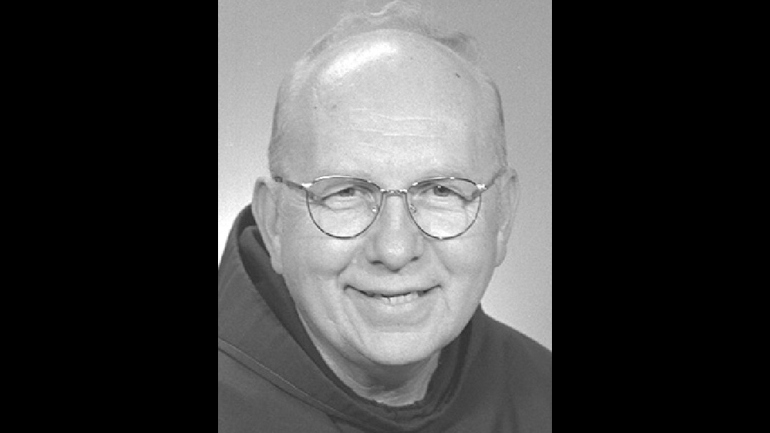 It was a classic wake, with relatives speaking fondly and openly about a friar prized for his gifts, his quirks and his faithfulness.

Asked to share memories of Br. Steve Richter at his March 27 funeral, many family members weighed in, eager to talk about a man they agreed was “a character”. The Rite of Reception at St. Margaret Hall was a lively, upbeat conversation, with smiles outnumbering tears.

“As we welcome the body of Stephen, we also welcome you who have been part of his life and journey,” said Presider Br. Jerry Beetz, Guardian for Senior Friars. “This is an opportunity for all of us to share brief memories of Steve,” was all he had to say to open the floodgates of memory.

Brother friars remembered him as a cook, a porter, a chaplain at St. Francis Hospital and Friars Club. 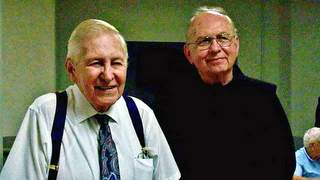 Steve’s nieces remembered their “Uncle Jim” for his years at Friarhurst Retreat House. “When we got married he made sure our rehearsal dinner was at this lovely, lovely place,” said niece Colleen Richter. “It meant a lot to me. He was a good, good guy.” At the Friarhurst Christmas party, “Everything was always perfect,” said Fr. Carl Langenderfer. “Steve used to brag about running the place,” during two tours of duty as Business Manager.

Carl joked about Steve’s preoccupation with his health: “His epitaph could be, ‘I told you I was sick.’”

That drew laughs and “Amens” from the family, such as: “That sounds like him”; and, “He enjoyed poor health.”

Although “He was the most quiet of the Richters,” said one relative, “He loved gossip,” according to Colleen, “and wanted to know the scoop about everyone. He was nosy – but not in a bad way.”

Family devotion ran deep with Steve, who always showed up for milestone moments. “But he never stayed long,” one niece reminded another. “He was blunt; you never knew what he’d say, whether you wanted to hear it or not. He was a character.”

Separated from Steve by age and assignments, homilist Mark chose “to reflect a little bit on how God worked in Stephen’s life” through the themes, “I remember, I regret, I rejoice.” 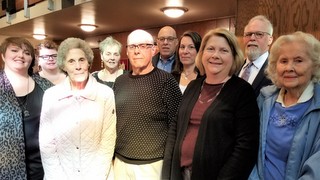 “I remember Br. Stephen when I was a younger friar. He had a sarcastic wit”; his family called his comments “zingers”. “I remember hearing he had grown up in Cincinnati and had been a cook in some of our houses.”

When their paths diverged, “I missed big portions of Stephen’s life,” said Mark. “I remember meeting Stephen years later at the Motherhouse. He seemed quieter, maybe more withdrawn. I met him again at St. Margaret Hall while on Council. He didn’t quite understand why he needed to be there. But his condition continued to deteriorate. Some days with loud raps on the door I couldn’t quite rouse him.

“I remember cajoling him to come down for our annual party that Br. Jerry throws. He eventually made it down and he had a great time. I remember the last time I came by. Steve said, ‘Isn’t it wonderful I’m being taken care of.’ This is what I remember.”

One regret, Mark said, “was that I didn’t know him better. He sacrificed finishing high school to take a factory job and take care of his mother until she died two years later.

“I regret I didn’t remember Br. Duane Torisky’s stories from St. George in the 1970s. He said Stephen knew all the funny stories about older friars, and they would howl at his tales. They used to go to a German restaurant called Lenhardt’s some Sundays. Steve could be ‘a real Dutchman when it came to price,’ according to Duane. “He told the Lenhardt’s owner that he had the best sauerbraten in town, but ‘you know, those portions are getting smaller, while your potato pancakes are getting larger.’ 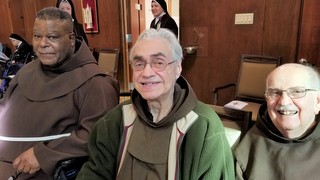 “I regret not knowing the Stephen who would help Duane out with many renters at Friars Club,” Mark said. “Duane told me that Stephen frequently took over as relief desk clerk; that allowed the staff to have a Christmas party, or when someone didn’t show up. I did not know that Steve served on a parish team in Bloomington [Ill.], taking care of sick parishioners. Or the man who left his cooking career to serve as a chaplain for St. Francis Hospital. Or his seven years as Business Manager at Friarhurst.

“I regret that Br. Steve has died. I regret the suffering he endured as he slowly let go of all that we think is essential: his memory; his being a friar; his life breath. And yet, I rejoice that many of the things that would irk Stephen have all gone away. In his present state, he knows he is God’s child, for that is what we really are, as he is held in God’s arms.

“I rejoice that he finally gets to see the results of his faith he has followed all these years.”

That faith was a comfort and example for the many relatives who came to mourn and reminisce. As a child, niece Dianne Richter could never understand why her uncle was a bachelor.

“Why aren’t you married?” she once asked Steve. “It always baffled me.”

He was already taken, he told her. “I’m married to God.”