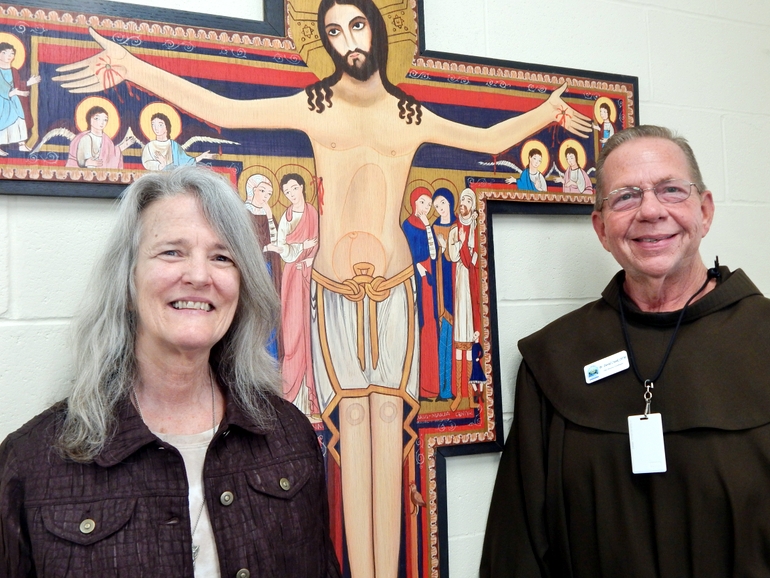 Br. David Crank’s goal is “to project the loving presence of Francis and God.”

That’s his job, the work for which he’s paid – and one of the hardest things he has ever done. 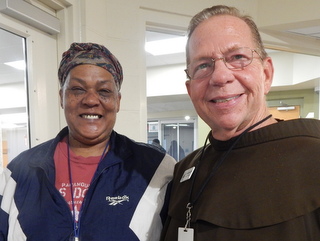 Five days a week, “I just go out here and stand,” he says, pointing to the doorway of the Mother Teresa of Calcutta Dining Room at St. Anthony Center. “Who I am is a Franciscan friar coming to work in my habit and being present. I just welcome people.”

Of course, it’s not that simple. Consider the setting, a soup kitchen in Over-the-Rhine, and the clients, many of them homeless, addicted or mentally disturbed. Quite often, “We’re dealing with desperate people,” says David – but he’s not doing it alone. His colleague and kindred spirit at the Center is a fellow Franciscan, Ann Marie Quinn, OSF.

If anyone understands the ministry of presence, it’s this Oldenburg Sister. Before she came here, “I had worked with people living in poverty for 30 years,” says Ann Marie, who previously served in Mexico and Montana. “But I had never worked with people with mental illness.” 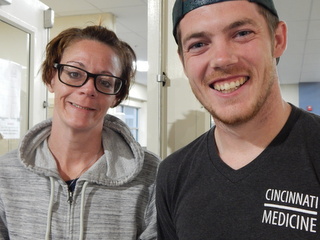 Learning as they go, she and David are forging connections with the people who come here lost or lonely, in need of a meal, in search of acceptance they may not find elsewhere.

Hospitality is not uniquely Franciscan, but it is particularly Franciscan. To guests of the Center, ignored by or invisible to much of society, it means validation. David and Ann Marie are not psychologists or social workers or case managers. But they know that in the right place, at the right time, a kind word could save a life.

“All I do is give them time and attention and eye contact and let people know, ‘I am happy you chose to be here,’” says David, who works the “dinner shift” in his role as a part-time Client Services Coordinator for the Ministries. “This is more than a pleasant place where people can wait out the elements. Our primary reason for existence is to feed the hungry, and we do a good job of that. With Sister and I being here, we need more. We need to make connections. People with no exposure to the homeless just see bums on the street. These are our sisters, our brothers.” 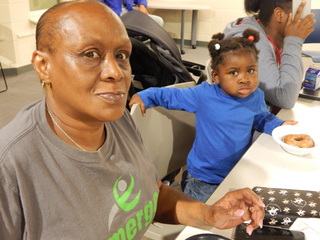 Guests can feel a sense of security here.

Ann Marie thinks of the line from the film Avatar – “I see you” – when she greets guests for breakfast at the Center. “All of us need to be seen,” especially those living in homelessness or struggling with mental issues, she says. “We want to see them, and listen to them.”

Many clients are so downcast they are unable to return the greeting David offers them at mealtime. To him, they are known, and they are special. “I feel in some ways like a Dad waiting for his children to come home for dinner,” he says. “And when you don’t see them, if Joe, for example, doesn’t show up, or I haven’t seen that couple,” he tends to worry.

Both he and Ann Marie are finding their level of comfort in dealing with guests’ lapses in medication or adverse reactions to drugs. Last year before she accepted a full-time job as Client Services Coordinator, “I wanted to make sure I was not going to be afraid.” 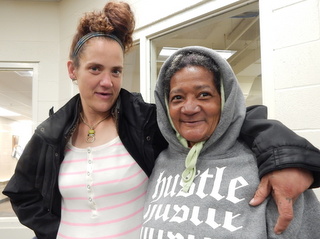 Encouraged by Chris Schuermann, the Ministries’ Executive Director, she started volunteering at St. Anthony Center, a space shared by seven partner agencies serving the homeless and impoverished. “I didn’t want to live in fear,” Ann Marie says. “I knew I wouldn’t work well if I was afraid of people. I love people. The opposite of love is not hate; it’s fear. If we fear, we can’t love them.”

She had a lot to learn. Her first day visiting the facility next door, “I got hit in the face” by a guest who was fearful of contact. “I touched his shoulder and he started screaming.” When he hurled his baseball cap at her, it was “a clear reminder about boundaries” and the fact that “it wasn’t about me. It was about what he needed.”

The reality is, “It’s rough out there and it’s rough in here sometimes,” David says. “Last night we had a medical emergency and it triggered some behavior problems. It was like, ‘Oh my Lord, what happened?’ Occasionally, “A simple insinuation sets people off. Then we have to de-escalate” the situation. “I have to remember it has nothing to do with me in this setting. It has everything to do with their past.” It helps that “my habit is recognized as a religious symbol, a symbol of a peacemaker. When I throw my arms out and ask for peace, people listen. I wouldn’t have the encounters I have with them if I were not wearing a habit. It’s like a doctor wearing a medical jacket. This shows who I am.” 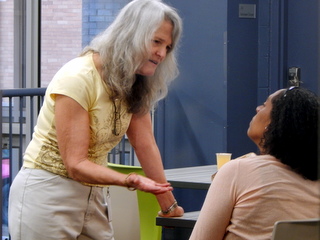 In his previous work with AIDS patients in Houston and mentally challenged people in Chicago, “The worst thing I had to deal with was a drunk. The worst thing here is people who are high on heroin. Someone could be shooting up and dying in our presence and they have to have Narcan,” the emergency treatment for opioid overdose. “Those are the extremes. They can be very violent.”

On one wall of a small enclosed office at St. Anthony Center are a couple dozen photos of guests banned from the premises because they are sex offenders, have threatened others, exhibited “extreme intoxication” or tried to sneak a gun past a security guard doing body scans with a hand-held metal detector. Because of the stringent security, “People come here and know they’re safe,” says Ann Marie.

A video feed from multiple cameras in and around the building plays on a monitor with 36 real-time views. It fails to capture the daily drama. 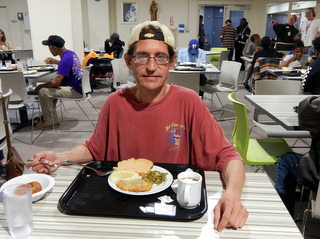 Take a recent Friday morning, for example. At 6:30 a.m., Ann Marie arrives to check in the volunteers who make this ministry possible. She cheerfully calls to guests sleeping under the building’s overhang, “Good morning, rise and shine,” adding, “You can’t be blocking the door.” When just three volunteers turn up, staff members step in to fill the gap, including Director Chris. “We’re the only thing open from 7-9 every weekday,” Chris says of the line of people forming outside.

They open early for guests waiting in the rain. By 8 a.m., someone has scrawled what looks like a gang sign on the sidewalk out front with a Magic Marker. Shortly thereafter, Ann Marie calls the police to report hot coffee being dumped on passersby from a window next door.

On this typical morning, several people are referred to agencies for housing or health issues. Ann Marie greets guests by name with a smile and sends them to the dining room with a pat on the shoulder when they are cleared by the guard. “Morning, Sister,” or, “Good morning, Miss Ann,” a number of them offer. “Ken, how’s your back?” Ann Marie asks one man. “Most are regulars,” she explains. “Substantial numbers are homeless and drug-addicted.” Overhearing this an older gent says, “I never do bad stuff.” And she responds,
“That’s why we like to see you every day.” 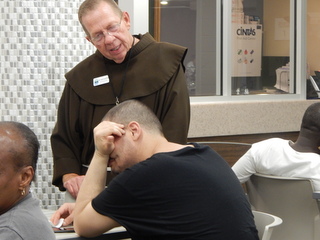 “These are our sisters, our brothers,” Br. David says.

Of her job she says, “It’s very draining. It can take a toll when you see someone almost dying. It took 10 shots of Narcan to revive one guy after an overdose. One woman had a miscarriage in the bathroom. She was an alcoholic who said she didn’t know she was pregnant.”

Given the intensity, why did they choose this ministry?

For Ann Marie, it’s the feeling that “I know I am meant to be here.” For David, “A really good day has always been when my interactions with guests have been positive. Maybe having them say ‘hello’ back to me, or ‘thank you’ when they leave. Or when someone comes up and starts sharing with you.” As Chris has told him, “Your presence is making a difference and I’m hearing about it.”

When your goal is to reflect God’s love, what more could you ask? 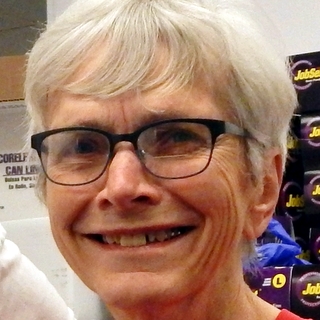 If only they could clone people like Joan Hilton, who comes here three or four days a week to do “whatever they tell me to do.” In summer there’s a huge need for volunteers for the meal ministry, when regulars are on vacation and college students have gone home.

If you can spare a few hours a week to help at the weekday breakfast (7-9 a.m.) or dinner (4-6 p.m.), please call 513-549-0542 or email tdiersen@sfsministries.org to schedule a time. Small groups and families are also welcome to volunteer, but children under 16 must be accompanied by an adult. The St. Anthony Center is at 1615 Republic St. in Over-the-Rhine.

Still on the journey