One soldier’s story of Normandy 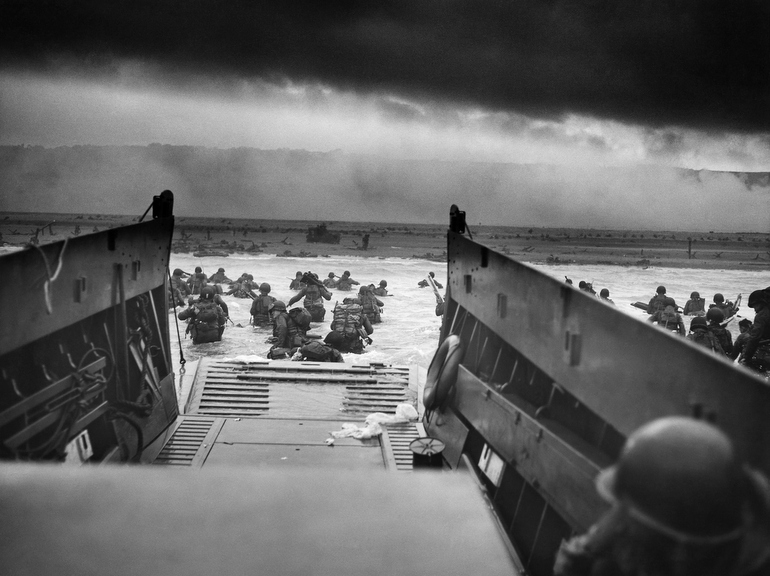 One of the first waves of soldiers heading for the shores.
Chief Photographer’s Mate Robert F. Sargent / National Archives

My brother-in-law, Robert Stieritz, was an infantryman in the 90th Division that landed on Utah Beach in the Normandy invasion of 1944.

He rarely spoke about his experiences, but I recalled him sharing the anxiety of the men as they trained in the English port of Portsmouth for months, waiting for the big day they sensed was coming. His 358th Regiment was held back on D-Day itself while the 359th took part. On D-Day Plus 2 his regiment sailed off for a diversionary attempt from Utah Beach to draw the attention of the Germans. They ended up crossing farm fields in France. On the way after landing and wading ashore, his unit crossed a stream and the men were forced to carry their rifles over their heads to keep them dry. It was then that the tip of his finger was shot off, for which he received his first Purple Heart. (I can only imagine what that meant later to realize how close that bullet came to his head!)

His unit was crawling on their hands and knees when they confronted the first of the famous “hedgerows” marking the farmers’ fields in France. My brother-in-law mentioned looking up and seeing a German tank’s cannon over his head hidden behind the hedgerow. He looked around and found his unit had hunkered down some distance back in a farmhouse. So Bob took off running back, with machine gun bullets kicking up dirt around him as the Germans spotted him. He jumped in a few shell craters along the way for shelter but finally made it safely back to the farmhouse. This was the ONLY experience Bob shared with me and never did with his family.

Ultimately he landed in the hospital for his finger but returned to fight all though the war, including the Battle of the Bulge, until his unit linked up with the Russian army. Bob was awarded a Bronze Star for Valor, Combat Infantryman Badge with Four Battle Stars, plus his Purple Heart and numerous other decorations. A modest man, but a true hero!

(Pvt. 1st Class Robert Stieritz was just 18 when he took part in the invasion of Normandy. After the war he had a longtime career with the U.S. Postal Service. Robert and his wife Suzanne, Tom’s sister, had five children, 11 grandchildren and 14 great-grandchildren. He died in 2003, seven years before Suzanne.)

"Where did the years go?"