50 years ago when men landed on the moon, where were you? 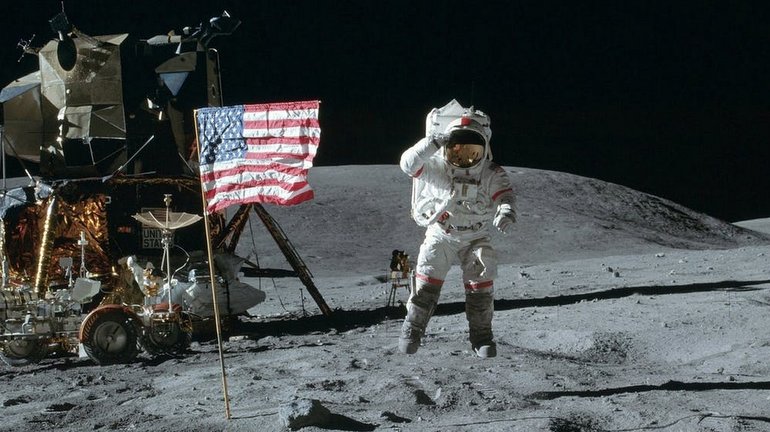 On July 20, 1969, Neil Armstrong and Buzz Aldrin stepped onto the moon while Michael Collins flew Columbia on a lunar orbit. We asked our friars their memories of that historic event.

Fr. John Quigley, OFM:
It was a hot, dark July night at Notre Dame University. A group of us crowded into a dorm’s TV room, fixated at the images on the black and white television. In the past year we had lived through the horrific images of the killings of Martin Luther King and Robert Kennedy, the riots in LA, the crushing of the protests in Czechoslovakia and Hungary and the police brutality in Chicago during the Democratic National Convention. The encyclical Humanae Vitae left a fresh wide path of confusion in the Catholic Church.

Then out of nowhere Neil Armstrong stepped into history. He showed us that with spirit, risk and hard work, impossible dreams can be realized. Astronauts were bouncing off the moon’s surface like kids at a school playground. Suddenly hope and pride in human effort swelled, holding us all together. Anger, factionalism and cynicism melted as we watched the bulky, child-like brothers fulfill an impossible dream of the human race. 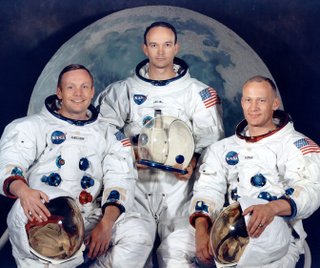 Fr. Dan Anderson, OFM:
A small group of us singers and instrumentalists from Duns Scotus College played for a first Mass in the Detroit area on the afternoon of the moon walk and were invited to the reception. That evening after dinner I went outside the reception hall and sat on the side of a small hill staring at the moon. I remember trying to wrap my mind around the fact that there were actually human beings up there. It was an almost dizzying concept. Later that night, watching Neil Armstrong’s foot touch the surface of the moon and hearing his words, I was choked up with wonder.

Br. Mark Gehret, OFM:
I remember the images of the lunar landing on TV and the sense of pride. But what I remember most is our Fort Loramie High School band being invited to march in the parade in Wapakoneta, Ohio, for Neil Armstrong’s welcome back home and the opening of the Armstrong Air and Space Museum. I was heading into my freshman year and so I got to march in that parade. We all got to see Neil Armstrong in person. That was a great reward for having to march in the hot summer in our dress uniforms.

Br. Dominic Lococo, OFM:
I was living at the Motherhouse when the moon landing took place. The TV room was located where the business office is now. Two friars who were watching the landing with me were Fathers Roger Huser and Dominic Calme. I recall we were very excited and couldn’t take our eyes off the screen, knowing it was such an historic event. Hard to believe it was 50 years ago. 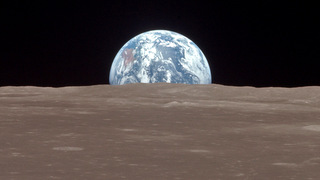 Earth from the moon’s surface

Br. Gene Mayer, OFM:
We, the novitiate class of 1968-‘69, were just four days short of a month before making our first profession in Oldenburg. Novice Master Edwin Deane gave permission for us to turn on the TV and watch the moon landing—and yes, that was extraordinary for novitiate, let alone for Edwin.

Fr. Frank Jasper, OFM:
I was at Bishop Luers High School [in Fort Wayne, Ind.] when the moon landing occurred. It was an exciting time. As I recall, the astronauts were supposed to take a rest before the famous moon walk, but they were so excited they were unable to rest. Many of the friars were at summer school, but all of us who were there crammed into this little television room. Even Flavian Schneider, who never varied his rigid schedule, stayed up to watch this historic event.

It was really thrilling for me and it emphasized how we are really one tiny planet spinning around in this gigantic universe. The pictures of the earth from the moon convinced many people that we are all in this world together. And so, we need to learn to live in peace with each other and with Mother Earth. 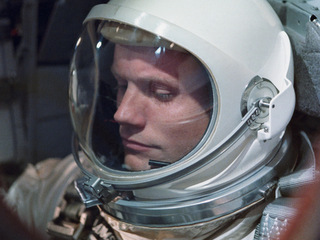 Fr. Loren Connell, OFM:
I was studying at Notre Dame University that summer. As I recall, several of us grad students were sitting around a television set in a common area in one of the dorms.

I think it was late at night when Neil Armstrong actually stepped on the moon. I found his “one small step for man, one giant step for mankind” puzzling then, and I find it still puzzling today.

Br. Mark Ligett, OFM:
Fifty years ago I was preparing to enter the novitiate, living in the postulancy program at St. Joseph’s Brothers School, which was at that time located at Mt. Airy. We had super strict rules about watching television and we were not given the newspaper to read!

I have a vague memory of Fr. Francis Hoffer, our formation director, announcing to us during our weekly “Incidentals and Decorum Class” that an American had landed on the moon. I think Francis wedged that announcement in between the really important stuff we were learning in the I & D class, things like how to make hospital corners on our beds when we changed the sheets as well as the exact location where our Franciscan laundry number should be sewn into our underwear! By the way, I was formerly number B-53!

I really have no clear memory of the Armstrong event other then what I learned in the months and years following. 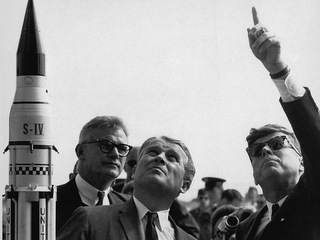 Br. Phil Robinette, OFM:
“The day Neil Armstrong stepped onto the moon, in what he aptly captured in a few words that awed the entire world as ‘one giant leap for mankind’ was such an audacious experience of human achievement in technology, coupled with the daring courage of our astronauts, that one could not help but be awed by the immediate experience of viewing this scene unfolding on live television. In my case that television, with its fuzzy black and white picture captured by antenna from a broadcast tower some 40 miles away in Chicago, was mounted to a concrete block wall in the barracks of the 937th Company of the Recruit Training Center at the Great Lakes Naval Base on the shore of Lake Michigan, where I was with my fellow Navy recruits just halfway through the midpoint of our time in boot camp. It was a the fulfillment of a promise made by President Kennedy almost a decade earlier, and the experience of finally viewing such an anticipated event made me so proud, I would venture to say was true for each sailor in our entire Recruit Company viewing that historic moment together.”

Fr. Joe Nelson, OFM:
I remember it well. I was at my parents’ home, sitting with them in the front room watching it on a small TV. What amazed me most was how they could broadcast to earth all the way from the moon. 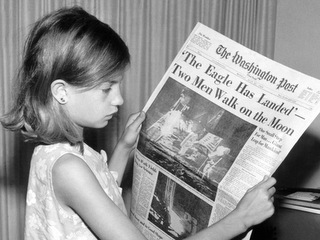 Headlines on the New York Times

Fr. Bill Farris, OFM:
I was 18 years old, traveling with family on the final stretch of a long road trip. Traffic on the expressway had been stopped that day for several hours. We finally made it home to South Bend much later than expected, but just in time to turn on the TV and watch the landing. Even though we were all tired from the prolonged car trip, we were all excited to have arrived on time for the event.

Br. Tom Gerchak, OFM:
I remember waking up very early, about 4 a.m., to hear with my family about the lunar module landing on the moon. I am not sure what time it was when we later saw Neil Armstrong make his first step. The TV picture and sound had a lot of static in it, but we were still fascinated.

Fr. Robert Seay, OFM:
I remember vividly when all the friars at Bishop Luers High School gathered in the TV room to witness the landing on the moon. I can’t remember all who were present, but Conan Taylor was the most demonstrative, shouting and dancing around the room. All of us were awestruck, but Forrest McAllister and I were the proudest. As Neil Armstrong’s home was less than 15 miles from our own Lima, he was considered a “homeboy”.

Fr. Miles Pfalzer, OFM:
The people I spoke with thought that the moon landing was not real, just something put out by the movie industry. [Miles was a pastor in Buras, La., in July 1969.] 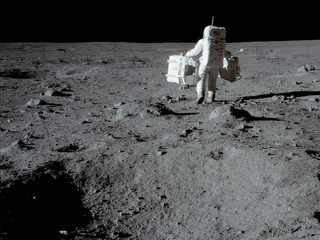 Walking on the moon

Fr. Henry Beck, OFM:
I have a vivid memory of watching the moon landing on our black and white TV with all of my family members gathered around in our family room. I can still see the images of the landing craft and first Armstrong and then Buzz Aldrin stepping down on the moon’s surface.

I remember Armstrong’s words as he stepped on the moon “one small step … one giant leap.” I also remember smiling as they “bounced across the surface,” and Buzz Aldrin swung his golf club on the moon’s surface.

Br. Norbert Bertram, OFM:
John Friebel and Bart Wolf and I were on our way to St. Michaels Mission to start the brothers work crew. We were in simple vows and lived at Mt. Airy. We stopped at a shopping center somewhere along the way, and right inside the Mall was a furniture store where a TV was showing the moon landing. (I called John and he agreed that this was right.) 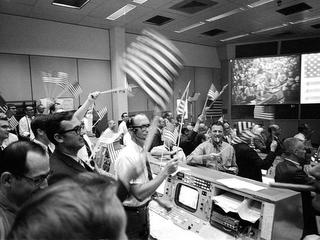 Fr. Greg Friedman, OFM:
This year’s golden jubilarians were novices, and all the rules about watching TV were suspended. We were able to follow everything, into the evening, with Walter Cronkite delighting in each accomplishment. The next morning we had special prayers of the faithful, written for the occasion. I still have my copy!

Fr. Mark Soehner, OFM:
On July 20, 1969, I was 10 years old and about to turn 11 in a few hours. I remember going to bed, only to be awoken by my good parents, encouraging their pajamaed and bleary eyed children to watch history in the making. I was impressed by Neil Armstrong’s, “One small step for man, one giant leap for mankind,” if only for the play on words. I began to realize, even at 10 (or was 11 by that time of night?), that our way of seeing ourselves was changing.

My vision of humanity was changed by the repeating picture as I grew of the earth from space. I could see the beauty of this little blue marble of a planet, slowly turning in an immense sea of darkness. I began to understand the swirl of stars above me on a warm and dark summer night, to be composed of thousands of suns, many with planetary accompaniments. And that this Milky Way was just one of many universes in an expanding reality.

And yet, how precious is the one step that each of us will take today? Any small act of kindness produces ripples in the unseen amniotic Being in which we all swim and participate without general awareness. Our efforts at being centered in that Being, of claiming our dignity as beloved sons and daughters of God, who is Love itself, send out radiating rings of love. Clearly our actions of caring for the Beloved Community of God, who is every living being, have effects.

What one small step am I being encouraged to take today? It may set in motion a giant leap beyond humankind, contributing to God’s Kingdom. 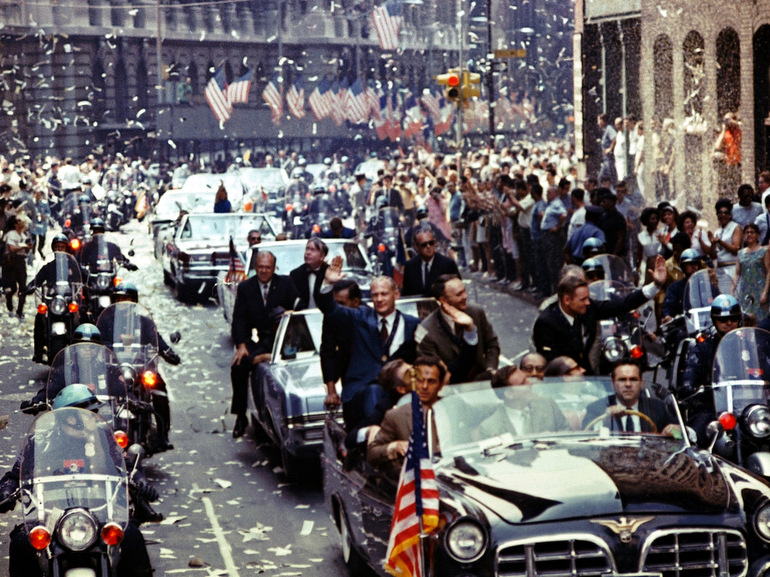