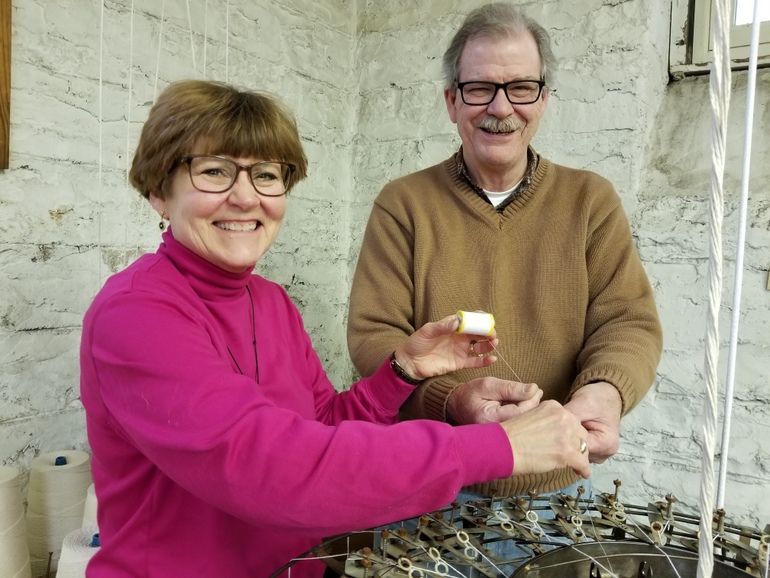 As 31 strings feed through dozens of clacking parts, what could possibly go wrong?

Plenty, as it turns out. This is what Joni and Gary Mataitis have learned in the five months they’ve spent learning to run a cord-making machine. 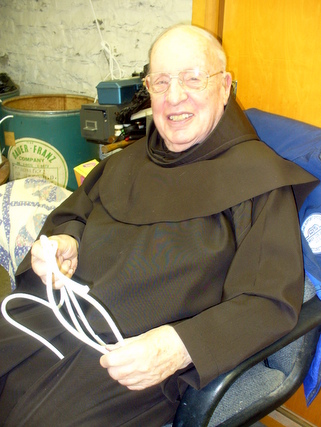 “It’s always something new,” says Joni, such as, “A bearing came off. A bobbin has flown out. A spring came off. Screws have come off. All the threads have broken at one time or another. So many things can go wrong to make something so simple.”

Yet here they stand in the basement of St. Clement Friary, fiddling with this cranky contraption when they might easily be enjoying a relaxing retirement. Last fall they were happily occupied elsewhere, donating time to community causes and volunteering at St. Anthony Shrine. CPA Gary has also been helping several friaries with their books.

But they answered the call when St. Clement Guardian Frank Jasper asked them to check out the machine on which the late Br. Bernard Jennings made cords for habits. Long neglected, “It was dirty, but it was threaded and ready to go,” says Frank, who spent several days cleaning it up.

In October Joni and Gary, a congenial couple always ready for a challenge, took their first look at what they call “Bernie’s machine”. Friar Norbert Bertram, who knows a thing or two about cord- and habit-making, showed them how to use it.

They were off and running.

Since January they’ve spent most Mondays at St. Clement, working with Frank to unravel the mysteries of this spidery apparatus. They approached the machine with a mixture of shock, awe and suspicion. 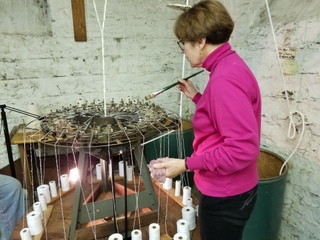 “It was fascinating,” Gary says. “The sound reminded me of a rollercoaster.”

The shock and awe wore off, but not the suspicion.

Couple and cord-maker came to an uneasy truce brokered by the spirit of Bernie, whose photograph hangs on the wall facing the machine. During the day their comments are directed as much to that picture as to the work itself.

Despite their trepidation, Gary says, “Frank had faith in us that we could do it.”

This particular cord-maker, built in 1964 and powered by electricity, sat idle after Bernie’s health declined. A skilled tailor and cord-maker since the 1940s, he died in 2017, weeks after a cancer diagnosis. In his heyday, Joni says, “Bernie was making hundreds of yards at a time” and selling cords to Franciscans around the hemisphere. To date this couple’s best effort is “44 yards of perfect cord – such a good feeling.”

She gestures to the core of the machine, “where the magic happens.” Ten strings are pulled down through the center. Strands from 31 spools of cotton feed upwards and across, like spokes of a wheel, to meet it. Then, voila! A shuttle picks up the outer string and binds it around the “filler” to create a cord – kind of like hair being braided. 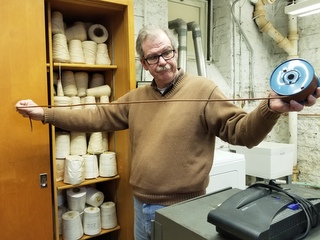 The finished cord flows from the bottom of the machine, so “you don’t know it’s bad until it comes out over here,” says Joni. Initially, “It wasn’t hard to learn the general operation. You learn as you go.” One of their refinements was the simple but ingenious idea of mounting a mirror below so they can they can monitor the output.

They routinely check notes from Bernie, handwritten prompts about suppliers, customers, pricing and washing instructions he taped to the walls and furniture. Cord-makers are essentially baby-sitting a machine that is hypnotically repetitious, slightly more exciting than watching paint dry, but much noisier – one reason this is not a Top 10 career choice among friars.

“Bernie would do 33 yards an hour,” Frank says, “and Joni and Gary crank out about 11 yards an hour,” with 5 yards required for the average habit. “They’ve reached a point where they are better than I am at this.” They sent the first 100 yards to the Poor Clares and are working on orders for many more. 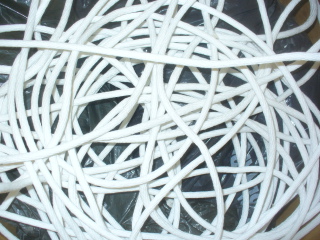 “We’ve messed up a lot of cords along the way,” Frank admits. “The machine will be running and you don’t realize it’s not doing what it’s supposed to do” because a spool of thread ran out. “We’ve broken the machine every which way we could possibly mention; it’s typical when you’re dealing with old stuff like this. Gary and I have fixed it a couple of times, but Joni is much better at spotting the problems. She’s got an eye for that sort of thing.” Whatever she suggests, such as, “Should we change the bobbin?”, husband Gary knows the appropriate answer is, “Yes, dear.”

Using bull clips and a generous supply of leather Bernie left behind, the resourceful couple has learned to make do with what they’ve got. “The most complicated thing was to change the belt” and re-tie the strings in the center core, Joni says. “It was challenging.”

So far, their only reward for the work is a free lunch at St. Clement – that, and a little recognition. According to Gary, “We met a Brother the other day and he said, ‘You’re the cord people.’” Joni amends that to, “We’re the ‘Cordians’.”

They are convinced Bernard Jennings has their back. “He’s watching over us,” Joni says, addressing his photo nearby:

“Bernie, are you going to be nice to us today?”

(For information about costs and orders, email: frankjasper@franciscan.org.)

Read Br. Mark Ligett remembrances of working with the cord-maker machines with Br. Bernie Jennings in 1967.