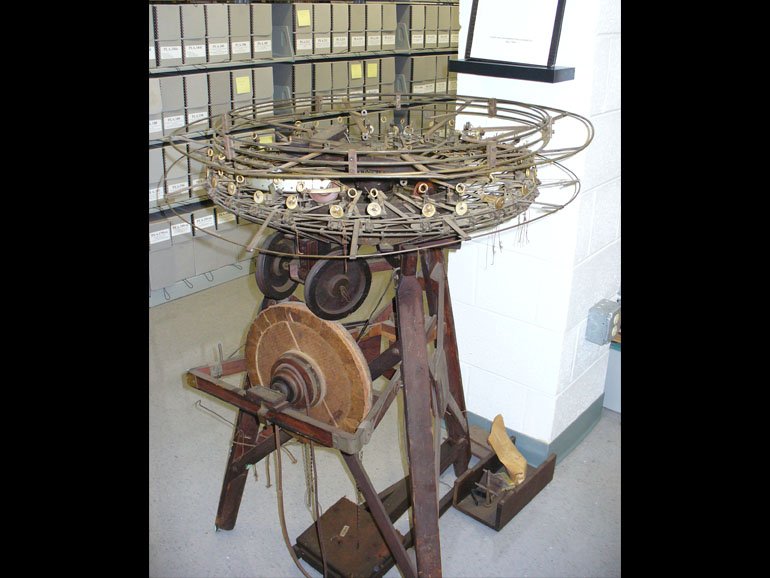 The original cord maker among the stacks at the Archives.

I enjoyed the article in News Notes on the cord machine and the couple now making cords. I also have a history with those machines, and everything written about them having “minds of their own” is exactly how I experienced them, too.

I was part of the candidate class who entered St. Joseph’s Brothers School at Mt. Airy in 1967. We were a unique “transition” group, as we were the first group not to first have to become tertiaries before entering the First Order novitiate. So, we spent two years as candidates before entering the novitiate in August of 1969. And I was one of the candidates who spent just about every day of those two years making habits and running those cord machines.

There were four cord machines in the tailor shop that needed to be operating eight hours a day in order to fill the orders we had. Br. Bernie Jennings hated to run them because of their constant breakdowns and their noise. When all four were running, we could not hear ourselves think in that tailor shop above the garage at Mt. Airy. I was the one assigned to fill the many orders we received and so I was always begging Bernie to let us run the machines, but he would often turn them off after two hours because he could not stand the noise.

You might be interested in knowing that the machines were designed to run with wool fiber, not cotton. The wool is filled with natural lanolin, which acted as a lubricant and allowed the shuttle to move around easily. When we first went to cotton, the machines absolutely refused to work. Finally, we focused on one machine alone and eventually, after several years of breakdowns every 10 minutes, it began to accept the cotton fiber. If we were to return to using wool once again, the machine would actually run much better. But as you know, the cotton is much easier to care for…and can be bleached!

Here are some other facts that you and the cord-making couple might find interesting:

Just thought you might enjoy some fun cord machine trivia!

Read the story that inspired Br. Mark about the current volunteer cord-makers, Joni and Gary Mataitis.