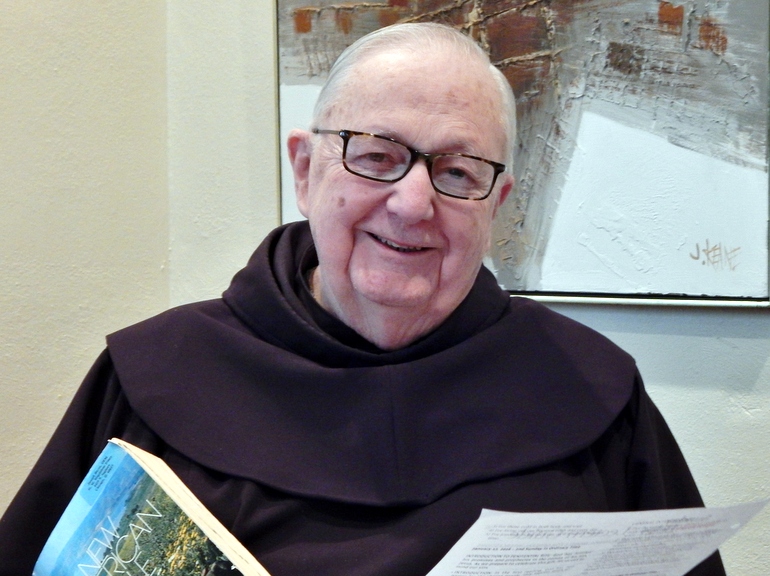 Being a friar was all about heart

They loved having him there. So even after Fr. Hilarion Kistner’s memory began to fail, the people of St. Stephen Parish did everything they could to help him celebrate Mass. Using cues and subtle signals, “We developed ways for him to survive,” according to one parishioner.

There was one thing they never worried about, she said. “What always hit home were his homilies. He nailed every single one, even if he messed something up at Mass. He could always give us what we needed at that point in time. And during his homilies, “He always had a twinkle in his eye.” Whatever Hilarion did, his heart was in it. 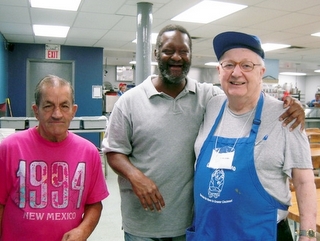 This was obvious, based upon the turnout and testimony for his funeral on Sept. 25 at St. Clement Church in St. Bernard. They came from every phase of his life, every ministry of his life, touched by his work as a teacher, as a preacher of retreats, as an editor of Sunday Homily Helps for Franciscan Media. Among those expressing gratitude were more than 50 friars and two dozen family members, including Hilarion’s sister, Sr. Amy Kistner, OSF. As one of her Franciscan sisters from Oldenburg said, “I give thanks for knowing him.”

The stories they shared reflect many variations of the word “faithful”. When Amy was working in Beattyville, Ky., she asked her brother for parish help at Easter. “For 25 years, he came down to Appalachia to do Holy Week,” she said. With preaching that was simple and succinct, “He was able to touch our hearts, the way he touched many people here.”

At Our Daily Bread soup kitchen in Cincinnati, where Hilarion bused tables once a week for years, “Everybody loved him.”

Volunteers Linda and John Faulhaber saw him the first Saturday of the month for 30 years when he ministered to patients and staff at Eastgatespring nursing care during his time at Friarhurst Retreat House. “He was one of the most knowledgeable Franciscans I ever met,” said John. “He always had advice that made me a better person. He used to say, ‘Jesuits think with their brains. Franciscans think with their hearts.’ I felt the presence of the Lord in him.” 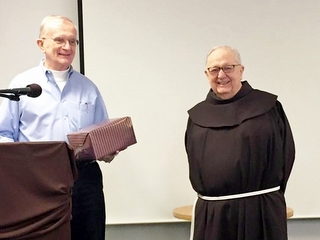 Kurt McGinnis, Hilarion’s great-nephew, looked forward to holidays “when we got to see our great-uncle. I had to mind my P’s and Q’s. He always talked to us about being right and being good. But the biggest thing was seeing him laugh, many times cracking jokes with the grandkids. He was fun.”

In the classroom, Hilarion drew mixed reviews. “I thought he was a good, good teacher,” said homilist Dennet Jung. But to Carl Langenderfer and some of his other theology students at St. Leonard College in the 1960s, Hilarion was known as “’Desert Dan’, because he was as dry as dust.” Once when they played back a tape of his lecture, “The tape stopped,” said Frank Jasper. “He even put the tape recorder to sleep.”

As guardian at St. Leonard, “Hilarion was always gentle and humble and considerate,” said Mike Chowning, “I’d sleep in and not be there for Morning Prayer, and he never once chewed me out.” Frank, who presided at the Reception of the Body, is guardian at St. Clement, where Hilarion spent the last months of his life. “He was always gracious and grateful for whatever you did for him,” Frank said. 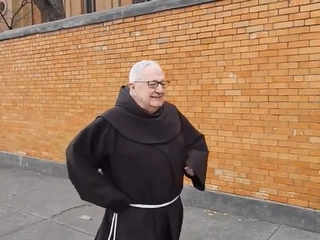 At age 88, Hilarion did a video sprint for St. Jude Children’s Hospital.

Celebrant Mark Soehner acknowledged the outpouring of love at the funeral. “We’re here tonight to celebrate and feel sad,” he said. “We celebrate the life of Hilarion, who was so good to so many of us.” Recognizing the groups and communities in attendance took a while. Mark thanked Hilarion’s nieces and nephews, Amy’s Oldenburg sisters, former students, Franciscan Sisters of the Poor, retreatants from Friarhurst, the Poor Clares, Secular Franciscans, Franciscan Media colleagues, and parishioners from St. Stephen, who in March mounted a 90th birthday celebration for their favorite pinch-hitting priest. “Let us open our hearts to prayer for Hilarion and all those Hilarion loved.”

For homilist Dennet, one of those former students, “It was such a blessing to be present for the Reception of the Body. I learned a lot from what you all said.” For example, “Even though Hilarion didn’t like being called ‘Hank’, you all called him that.”

Dennet and other students knew him as “Kohelet”, after the author of the Book of Ecclesiastes, “because we spent a lot of time on that in Scripture class.” Despite what others said, “I really enjoyed his class,” Dennet said. “He loved the Scriptures.”

First and foremost, “He was my teacher and he was a confidant of mine.” In the transition years around Vatican II, “I got upset we weren’t moving ahead quickly enough. I was leaning to the left. Hilarion calmed me down. He was a centrist; he kept me centered. The reason he was so centered is because he was focused on the center, focused on God.” 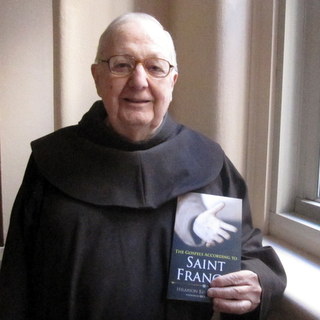 Fr. Hilarion holds his book, The Gospel according to Saint Francis.

Later, “When I was in parish work, I was struggling,” Dennet said. In a letter, Hilarion urged him to keep going. “He said, ‘God’s going to make everything all right in the end. God loves you. God will save you. Hang in there.’” As Dennet did indeed learn, “God is a good listener. He always listened to me when I was asking him to help me out.”

The selection of readings for the funeral did not surprise Dennet, especially the “All is vanity” passage from Ecclesiastes on Solomon’s search for the meaning of life. “Hilarion was Franciscan at heart. He lived a simple life and boasted only in the Lord,” believing that “God is good and all that we have and are is gift. What do we have to boast about? Nothing.”

As a young friar, Dennet said, “I was trying to make all things right. Hilarion was a simple friar,” following the teachings of Christ, “and he helped us be that way,” by setting an example of faithfulness. Through him, Dennet and many others saw that “we should do what we were made to do – be images of God.”

Dennet signed off by echoing the encouraging message he once received from his friend and teacher.

“Your reward will be great in heaven, Hilarion. Hang in there.”

Fr. Hilarion’s book, The Gospels According to Saint Francis, can by purchased at Franciscan Media.