Novices assemble for a photo at Mission Santa Barbara.

Their smiles tell the story. Oct. 15 was the day eleven OFM novices reached a joyous milestone in their formation as friars when they received the Franciscan habit and cord during the Rite of Investiture at historic Mission Santa Barbara. 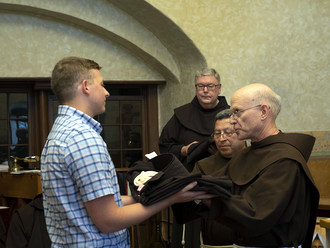 Novice Directors Jeff Macnab, Michael Blastic and Freddy Rodriguez had prepared the novices for this day. A ritual sprinkling of water accompanied the opening hymn and gathering prayer. The first reading in English was from Celano’s Life of St. Francis. The second reading from the Gospel of Matthew was proclaimed in Spanish: “Whoever wants to be my disciple must deny themselves and take up their cross and follow me…” Seven friars voiced their thoughts about the sign of the habit when all in the assembly were invited to share a reflection on the readings.

Friars from the US-6 provinces led the Rite of Investiture. They handed each novice a folded habit with the pronouncement, “Receive this habit of probation in the Order of Friars Minor. It is a sign of your commitment to your brothers, the Church and the world in service to Christ and His Church.” 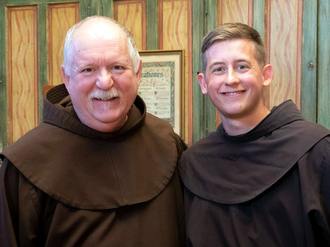 Vocation Director Tim Lamb with Joshua Richter after the investiture.

After processing to the sacristy to don their new habits, the novices soon emerged, newly clad. As they stood in the middle of the chapel, all sang a moving Blessing Prayer based on the Suscipe of St. Ignatius. After heart-felt Intercessions came the Lord’s Prayer and a Blessing.

The Closing Song began with the words, “Sing, O sing like the wind and sea; let music fill the skies! Lift your voice like the thund’ring waves: let songs of praise arise!”

The day of celebration continued with social time on the patio, and dinner and dessert in the dining room.