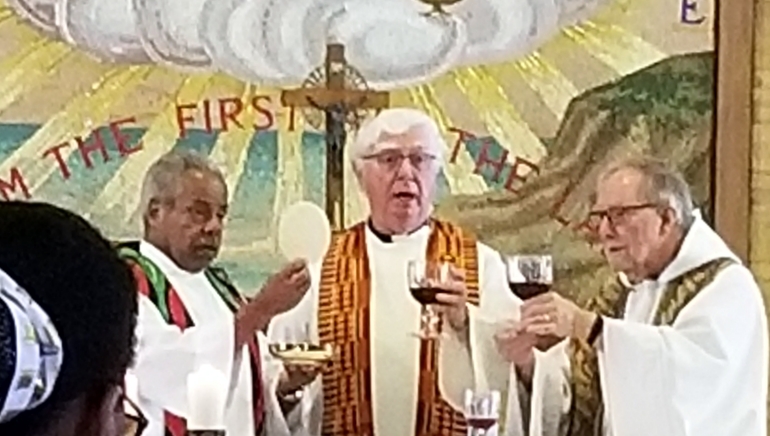 Friar Tom Speier had this advice for the crowd gathered on a sunny Saturday at Holy Name Church in Cincinnati: 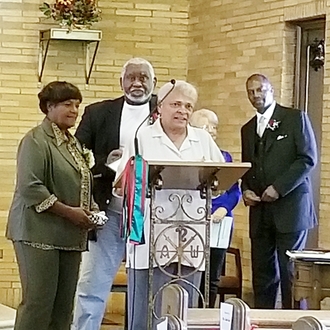 They didn’t need encouragement. Parishioners, guests and VIPs who came to mark Black Catholic History Month were there to celebrate. For 2½ hours on Nov. 16 they worshipped, they sang, and they honored sisters and brothers whose lives are examples of faith, hope and love. The theme for this third annual observance, “Order My Steps”, flowed from the gospel anthem for the day and the powerful passage from Psalms on which it is based.

The exuberant day was framed around a Mass featuring choirs from Holy Name and St. Anthony parishes, elegant liturgical dancing by Flora Leptak-Moreau, the return of former Pastor Terry Meehan and a homily from Bill Cross, the second African American to be ordained a priest in the Archdiocese of Cincinnati. But the undisputed highlight was a prelude performance of True Colors by the second-grade choir of Corryville Catholic School. The message was acceptance, and the earnest singers, barely bigger than toddlers, had listeners smiling and sniffling at the same time.

It was Parish Administrator Tom who welcomed an audience of old friends, new friends, city officials and state representatives. He began with a sobering reminder that 2019 is the 400th anniversary of the year the first African was sold into slavery in the New World. But this day was about what came after, and the progress and contributions made by black Catholics to the Church and to society. 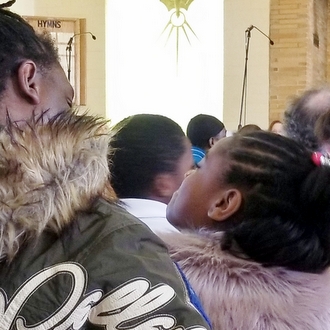 Families at Holy Name Church had a lot to celebrate.

Tom turned things over to Courtis Fuller, a weekend news anchor for Channel 5 and an engaging emcee. “It’s such a warm, welcoming church,” Courtis said of Holy Name, a small parish with a big heart, one known for its diverse community.

He introduced Councilman David Mann, bearing greetings from the City of Cincinnati. “There’s a certain grace and peace we feel at Holy Name,” David said, “so whatever you’re doing, it’s working very well.” He previewed the day’s centerpiece, the presentation of three honorees who established a life-changing sports program for local youth.

In 1986, Rachel Fair, Denise Carpenter and Anthony Pack founded the Inner City Tennis Project to give kids 5-18 years old an affordable outlet for their energy and athletic skills. What started as a six-week summer workshop became a successful year-round program that also teaches children personal and community responsibility. The long-term goal: “To keep kids on the court and out of court.”

Brought forward to sustained applause at Holy Name, all three expressed their gratitude, but Anthony left the audience with a quote that was especially appropriate for a celebration of success and empowerment. “As Dr. Martin Luther King said, ‘Not everybody can be famous. But everybody can be great.’ ” The only thing to add was, “Amen!”

Celebrating Our Lady of Guadalupe