Celebrating Our Lady of Guadalupe 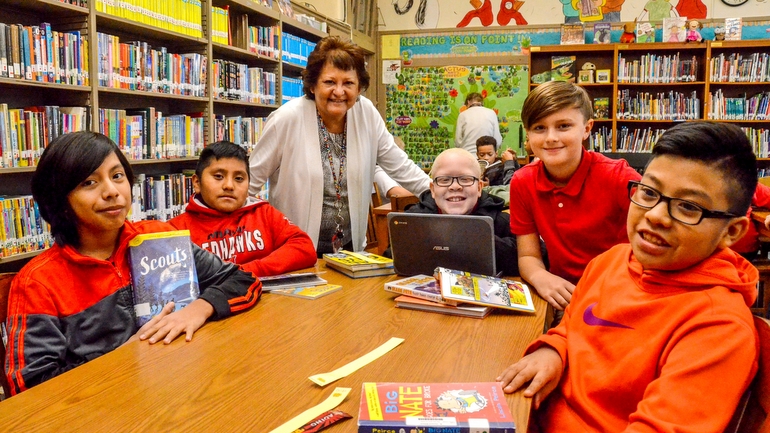 Librarian Rosie Eiser with some of her students

For Latinos around the world, the feast day is a pillar of faith

Next Thursday, people will happily sacrifice sleep to make their way to St. Clement Church well before dawn. Among them will be Rosie Eiser, who will share her devotion for the Blessed Mother at the parish’s first-ever Spanish Mass celebrating the Feast of Our Lady of Guadalupe.

Rosie joins millions of others throughout the hemisphere for whom Dec. 12 is more than the remembrance of a miracle – it’s a celebration of their Latino heritage and culture. At 5 a.m. at St. Clement and elsewhere, they will gather to sing and pray in a joyful spirit of thanksgiving. 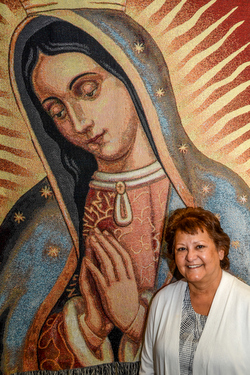 Rosie Eiser in the Library of St. Clement School

The Mass will unfold much the same way as when Rosie was a child. Raised in a Mexican-American household in South Texas, she and her siblings would rise long before daybreak to accompany their parents to church. On the day of the Feast of Our Lady of Guadalupe, “We would start with Las Mañanitas,” a Mexican birthday song lovingly presented by the congregation. “They serenaded until Mass; then we’d go home and have a big meal together in honor of the Virgin Mary.”

The feast day Mass is a pillar of her faith, a tradition Rosie treasures and has passed to her children as well as the students she mentors as Librarian at St. Clement Elementary School in St. Bernard, Ohio. “She’s always meant a lot to our family – my mother, my great-grandmother,” Rosie says of the Virgin of Guadalupe, the patroness of the Americas. Her appearance in 1531 to a poor Indian named Juan Diego set events in motion that eventually led to his canonization and the construction of the Basilica of Our Lady of Guadalupe near Mexico City.

“I have always known what she represented to our family. But it wasn’t until I went to the Basilica in Mexico City that she just became real,” when Rosie beheld the cloak of Juan Diego, on which the image of the Virgin was miraculously imprinted centuries ago. “I’m so devoted to her. I guess because she’s a mother; she supports me whenever I need something. She’s forgiving when I need forgiving. She loves you no matter what.”

And that love is reciprocated. According to Rosie, “One of my sons did a video where he walked around our house counting all the Ladies of Guadalupe” depicted in statues and other images. There were 41 of them. Rosie also displays her devotion at St. Clement School, where a radiant, wall-length tapestry of Our Lady as she appeared to Juan Diego hangs in the library.

Among those most deeply touched by Rosie’s enthusiasm is Jeff Eiser, her husband of 40 years and Principal of St. Clement School. In his 10-year tenure, he’s seen the number of Latino students grow to more than a third of the school’s population. “One of the things Jeff always tells teachers is that he wants St. Clement to be a welcoming school,” Rosie says. “Since we have a big Latino population, one of the ways to make them feel welcome is to have somewhere in their classroom a statue or image of Our Lady of Guadalupe. Every teacher has a picture of her. That is one thing students see when they walk in. I think every classroom learns about her individually.”

Pastor Fred Link is extending that same hospitality at St. Clement Church. Some of the families with children at the school were members of San Carlos Parish in Carthage, the hub of the Hispanic community in Cincinnati. After their church closed recently, the community moved to St. Boniface Church in Northside. Hoping to build bridges, St. Clement is mounting its first Spanish Mass for the Feast of Our Lady of Guadalupe. “We’re eager to do what we can to minister to the needs of the community,” Fred says.

For Rosie, family is the heart of the celebration. “Jeff and I have tried really hard to pass on our faith to our children, but I also want to pass on my culture. I go overboard, I guess,” in a home where images of Our Lady are everywhere you look.

“Her presence is big in my house,” but there’s a very good reason. “She’s my heart. She’s my home. I’m very blessed she is in my life.”

The Hispanic community of San Carlos, now based at St. Boniface Church in Northside, is hosting a celebration of the Feast of Our Lady of Guadalupe the evening of Dec. 12. Mass in Spanish at 6:30 p.m. will be followed by activities for children, Mexican dances and a meal of traditional foods in the cafeteria at 7:30.

The celebration begins at 5 a.m. at St. Boniface with the traditional singing of Las Mañanitas. Statues will be blessed at the church from 10 a.m. to 4 p.m. 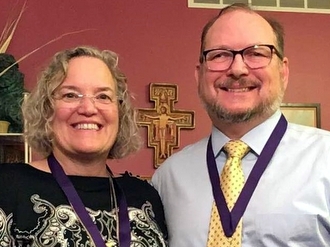 Doors open at 4 a.m. Dec. 12 for the observance of the Feast of Our Lady of Guadalupe at St. Clement Church in St. Bernard. They will begin with the traditional singing of Las Mañanitas, says Colleen Gerke, Director of Faith Formation for the parish. She and her husband, Deacon John Gerke, have made multiple mission trips to Mexico and are coordinating the celebration.

The all-Spanish Mass starts at 5 a.m. with Pastor Fred Link presiding. “People can bring candles or statues or flowers they want blessed for their homes,” according to Colleen. Those unable to stay for Mass are welcome to stop by and pray. Later, there will be pastries, tamales, hot chocolate and atoli (a corn-masa beverage) made by St. Clement parishioners.

The parish outreach to the Latino community extends beyond the Feast of Our Lady of Guadalupe. “Expanding ministry to our fellow Catholics whose first language is Spanish is in the works, and that includes Mass,” Colleen says. Expect to hear more.