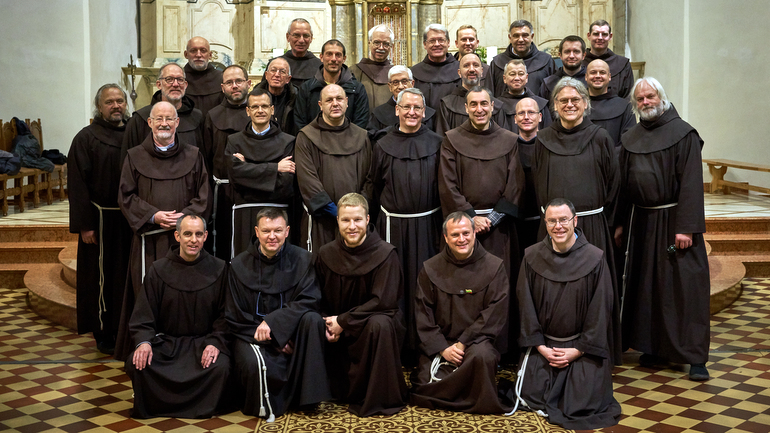 Friars from a dozen OFM entities at Annunciation of the Blessed Virgin Mary Church. Fr. Pat McCloskey, OFM, is in the center of the back row.

The Franciscans of St. Casimir Province in Lithuania may be the most hospitable group of friars that I have ever met. How they got that way is a great story. 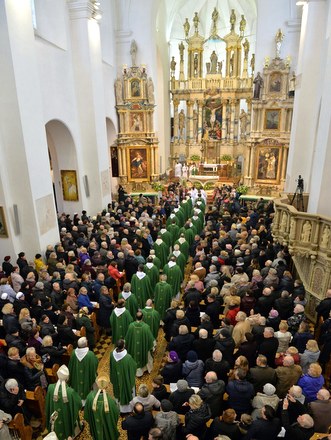 Mass at Annunciation of the Blessed Virgin Mary Church

Ten days after the Berlin Wall opened on Nov. 9, 1989, friars of St. Casimir Province descended on their former friary in Kretinga (northwest Lithuania) and celebrated a Mass in its courtyard, much to the amazement of startled government officials who years before had turned that friary into a museum of local history. It and four other former friaries were eventually returned to the friars. The first friars had come in 1252 to Lithuania, the last country in Europe to accept Christianity.

On Friday, Nov. 15, 2019, I was with 16 friars from outside Lithuania as we joined approximately 2,000 people gathered in the civic center in the nearby city of Palanga to celebrate 30 years of renewed ministry and the 550th anniversary of the founding of that province. I represented both the English-Speaking Conference and St. John the Baptist Province at the Nov. 15-17 celebration. The connection? Our own Mark Soehner and the Lithuanian provincial attended the same “provincials’ school” in November 2017.

A two-hour program in Palanga featured an orchestra of 60 musicians, singers of all ages, dancers, tributes from government officials, and the very talented trumpet-playing mayor of Klaipeda, the country’s third largest city. Filmed for editing into a one-hour program for a later national broadcast, this event celebrated the friars’ rebirth in Lithuania, the first religious congregation to do so while the country was still under Russian control. The evening included the audience’s enthusiastic singing of the “Salve Regina.” Mine were not the only wet eyes during parts of this celebration. 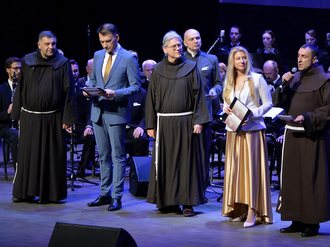 In 1940, the Russians invaded Lithuania, closed the province’s five friaries and scattered its 139 friars. In 1947, the province moved its headquarters to Kennebunkport, Maine, and continued to accept new members, ministering in the United States and Canada. The province later became a member of the English-Speaking Conference. After 1989, provinces from that conference and across Europe contributed formators, finances, and moral support to help the Lithuanian friars begin again.

The Lithuanian friars resumed some of their previous ministries and began new ones, such as a facility to house adults undergoing cancer treatment at a special hospital outside Klaipeda. The 35 Lithuanian friars minister in parishes, schools, and a variety of special ministries. The friars helped establish a Poor Clare monastery with a prioress from Mantua, Italy, and seven Lithuanian women who spent several years in Mantua to become Poor Clares. 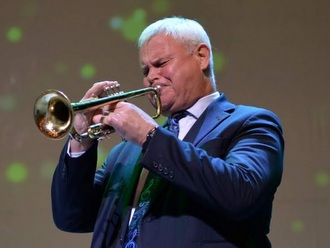 The trumpet-playing mayor of Klaipeda

On Saturday, Nov. 16, visiting friars explored a Lithuanian heritage museum, discussed with local friars their hopes for the Order’s future and took part in a two-hour prayer vigil with the local Franciscan family. Anthony Jukes (UK custody) and I had a tour of the adjacent grade school that the friars founded almost 85 years ago; it and the nearby Catholic high school enroll almost 1,000 coed students. I had brought donated Roger Bacon shirts, hats and other Spartan apparel.

Later we gathered at the Baroque-style Annunciation of the Blessed Virgin Mary Church. Roughly the size of St. Clement Church, with more seating, it was packed. Then followed a Mass at which Provincial Minister Fr. Algirdas Malakauskis presided and General Definitor Caoimhin Ó Laoide preached. A cookout followed outside with hearty soups, breads and delicious desserts. 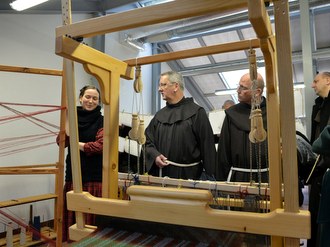 The next day we were back in the same church for a Mass at which the country’s newest cardinal (a Jesuit imprisoned for years by the Russians) presided, assisted by the local bishop, a friar bishop from another part of the country, plus many visitors and local friars. ABVM’s John Puodziunas, a former general visitor of St. Casimir Province, preached in English and Lithuanian, with simultaneous interpretation into the other language.

After a lunch with spirited speeches in the friary, most of the visitors went to the Poor Clare monastery and prayed with the enclosed nuns. The entire celebration demonstrated that all the friars, Clares, Franciscan sisters and Secular Franciscans are indeed “members of the same family.” March 4, the patronal feast of St. Casimir Province, will never again be the same for me.

The November celebration in Palanga and Kretinga drew 17 friars from about a dozen OFM entities in Italy, Poland, Germany, Ireland, England, Ukraine, the United States, and Australia to show their solidarity with the Lithuanian friars. That province has a special relationship with the Tuscan province, where several new Lithuanian friars did part of their initial formation. Lithuanian, Polish, Italian, Russian, English and many languages were spoken at meals and evening recreations.

A story about their gathering and more photos are posted on the Order’s website.

Harsh realities in a land of beauty