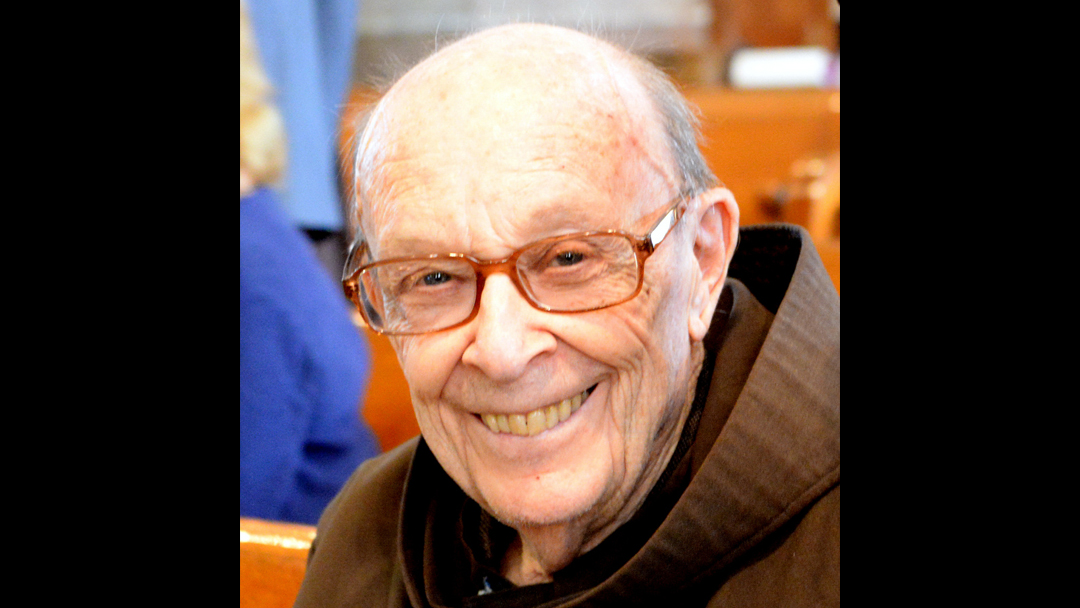 A man you could count on

Friar Valentine Young was as constant as the Northern Star. 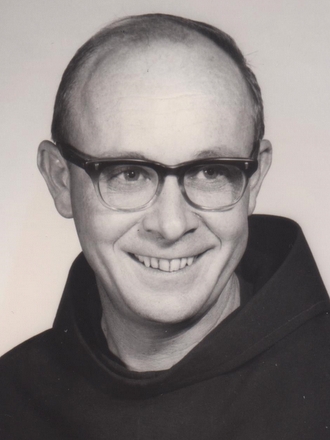 “He knew exactly who he was and where he was going,” according to Fr. Larry Dunham, the homilist at Valentine’s Jan. 22 funeral at St. Clement Church. It was that resolute faith and steadfast love for Latin at Mass and in the classroom that endeared him to generations of friars, relatives and worshippers. For many of them, losing Valentine was like losing their spiritual compass.

Some knew him only as an elderly friar who gamely persisted in ministry through serious heart issues. At 80, a retired Valentine started teaching Latin part-time at Roger Bacon High School. He had not lost his touch – or his sense of humor. In recent years, “He still carried around a ring of keys to five different churches” where he celebrated Mass, said William Hesch, a former altar server for Valentine. “He was like the patriarch of Latin Masses.”

Friar Matthias Crehan was greatly impacted by Valentine. “I wouldn’t have missed this,” said Matthias, who came to the funeral from Tucson, Ariz. “I was a student at St. Francis Seminary,” where Valentine taught Latin for nine years. “He inspired me” in many ways. “What a good man. What a good friend. What a good priest. What a good friar.”

And a good uncle as well, according to nieces and nephews who shared stories during the Reception of the Body. They remembered Val’s hospitality and his mastery of Navajo during their visits to missions in the Southwest, his support for a relative’s children when their father died far too young, and how much Valentine loved flowers, saving the seeds from blossoms and planting them at his next assignment. 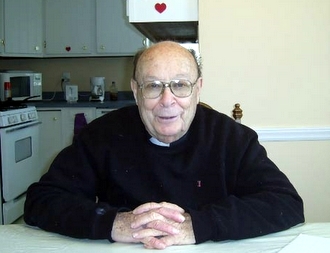 “He was always upbeat, always joking,” a former student said of Valentine.

His umbrella was wide and inclusive. “He was deeply loved by many people throughout the United States,” said Fr. Frank Jasper, Val’s guardian at St. Clement Friary. “He had a huge number of people he connected with,” including 300 on his Christmas card list. “It’s amazing, inspiring and touching” that after his death, greeting cards were still coming in.

Fr. Pat McCloskey met a long-time pen pal through Valentine. “He corresponded with at least one man in a federal prison” who was interested in getting a stamp from the Vatican. Pat provided one, and they ended up writing to each other for 10 years. When the letters stopped, Pat heard that, sadly, the man had died in prison.

“Fr. Valentine was a blessing and inspiration, a great mentor for our children,” said Tracey Cusick, here from northern Kentucky with her husband Chris and their seven children, three of whom were altar servers for Valentine’s Latin Masses at All Saints Church in Walton, Ky.

Maria and David Buckles came from Lexington, Ky., where Valentine celebrated Mass in Latin at St. Peter Church from 2009-2010. His connection to parishioners went far beyond sacraments, they said. “He really enjoyed the social time after the Mass.” 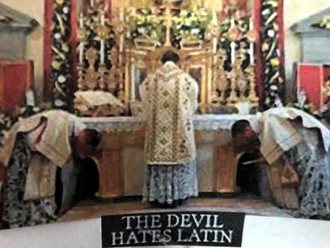 The sign on the door of Fr. Valentine’s room said it all.

Presider Mark Soehner described this as a time of celebration and sadness that deeply affected “the many nieces and nephews who were close to Valentine.” They lent their voices to the readings for the day: the poetic and hopeful message from Lamentations (“The favors of the Lord are not exhausted, his mercies are not spent; They are renewed each morning, so great is his faithfulness”); and the certainty of Romans 8:31-39 that nothing “will be able to separate us from the love of God that is in Christ Jesus our Lord.”

Homilist Larry, here from the Monastery of the Holy Land in Washington, D.C., said he was struck by a photo hanging on the door of Valentine’s room at St. Clement. It showed a priest in traditional vestments celebrating the Tridentine Mass. A caption Valentine tacked on the bottom read, “THE DEVIL HATES LATIN.” Of that Val was sure, just as he believed the promise Jesus made to his disciples in the 14th verse of John, the Gospel reading for the day. 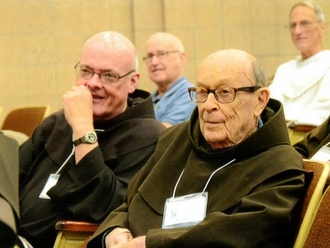 Valentine’s unexpected death drew his brothers, friends and relatives out of their daily routine “and forced them to think about life and its purpose,” Larry said. It had been “a quick death of someone of seemingly endless energy, revered by myself and members of our seminary class. The things we took for granted now look different than before his death. We wonder where we are going, if anywhere.”

In experiencing the death of “a towering personality like Fr. Val…we may feel we’re going in circles and not going anywhere. It makes us question our own direction.”

In the Bible when Jesus leaves his disciples, “What Jesus does not do is leave them a theology handbook,” Larry said. “We might wish that he did. This was clearly not his way. There are no maps to the future with specific routes. Jesus simply points to himself: ‘I am the way, the truth and the light.’ Jesus is the way by which we travel to the fullness of God. Only when we are united on the journey with him can we reach God.” 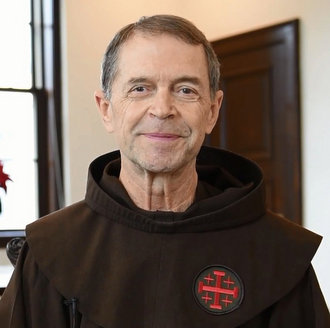 Larry wondered, “Does all this help to give us direction? We’re not lost on the road, abandoned to make our own way. Fr. Val believed this to his core. Fr. Valentine never had a doubt in good times and in bad times that all would be well. And so it is.

“Welcome to the end of your journey, Val. Welcome to your eternal language. Pray for us in the language the Devil so hates. We wouldn’t have it any other way.”

Among those lingering after Mass was Steve Merkel, a student at St. Francis Seminary in the 1960s. Steve said that despite Valentine’s best efforts, “I could not learn Latin.”

As a teacher, “He had lots of energy. He was always upbeat, always joking. He made Latin as good as you could make it.”

Asked if he retained any of the language skills, Steve admitted, “No.” What’s more, “It would not surprise Fr. Valentine at all.” The important thing is, “He tried.”

And he kept on trying, right up to the end. 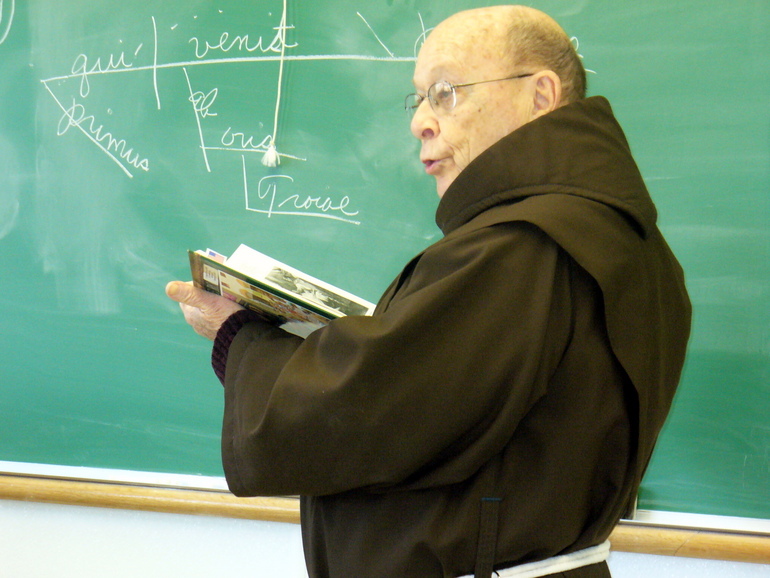