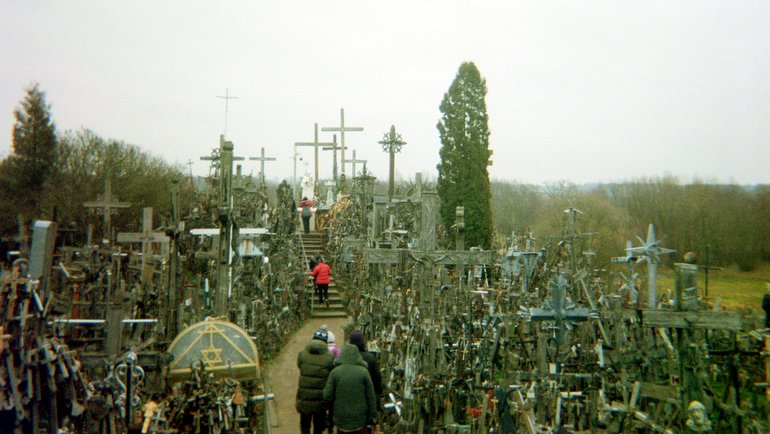 The “Hill of Crosses” in Siauliai, Lithuania

In an earlier article, I described my November 2019 trip to Lithuania to help the friars there celebrate the 30th anniversary of their resumption of public ministry once the Berlin Wall opened up. 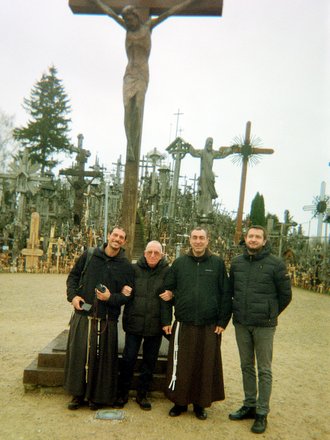 Fr. Algirdas, second from right, and his guests experience “the drama of the cross.”

After the main festivities were over, Provincial Algirdas Malakauskas drove five of us (two Tuscan friars, a Ukrainian friar, one from Australia and me) from Klaipeda to Vilnius to catch our return flights. That trip included a short visit to Algis’ mother along the way and then a very inspiring visit to Siauliai, home of the “Hill of Crosses” for almost 200 years.

Lithuania came under Russian control in 1795 with the third partition of Poland, with which Lithuania was then united. During the failed revolutions in 1831 and 1863-‘64, many Lithuanians did not receive proper burial. The “Hill of Crosses” began on the site of an old fort as a way to remember those who had died in these revolutions.

During the Soviet occupation of Lithuania (1944-90), the site was bulldozed three times, but the number of crosses, crucifixes and statues kept growing to perhaps 200,000 today. Crosses up to 9.8 feet can now be erected without a special permit. This is a place of national pilgrimage; a busload of people from Taiwan came during our visit.

When Pope John Paul II visited here and celebrated Mass on Sept. 7, 1993, he said: “The drama of the cross has been lived by many of your compatriots. For them Christ crucified has represented an inestimable source of spiritual strength in a moment of deportation or condemnation to death. It has been for this entire nation and for the Church a providential sign of blessing, a sign of reconciliation among people. It has given sense and meaning to sufferings, illness, to sorrow. Today as in the past, the cross continues to follow human life.” 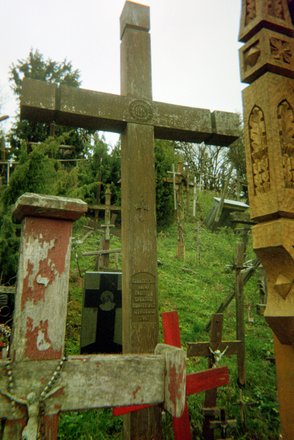 The Hill of Crosses on the site of an old fort.

There is a special bond between this shrine and the OFM Province of the Stigmata of St. Francis (Florence). In 1994 as an act of thanksgiving for his previous visit, the pope sent several Tuscan friars to deliver his gift, a large crucifix that stands at the entrance to the hill. In the chapel of the adjacent friary, there are art glass windows representing this shrine and the one at La Verna.

During our lunch at the nearby friary, I sat across from Fr. Severin Holocher, a member of that community. When he found out that I belong to St. John the Baptist Province, he asked if I knew Fr. Tom Speier, whom he remembered fondly. Severin had made Tom’s spiritual direction program about 30 years ago on Mill Road. Shortly after returning to Germany, his provincial asked if he would go to Lithuania to learn the language and assist in the initial formation of its friars. He has been there for 26 years, helping first in Vilnius and now at this shrine. When I later told Tom about this, he remembered Severin very well and very warmly.

After lunch we resumed our trip to Vilnius, where Philip (Australia) and Emanuel (Ukraine) caught their flights. In late afternoon, Algirdas led us through old Vilnius, where we saw the cathedral, the Polish church that housed the original Divine Mercy painting, the new Divine Mercy shrine, a Russian Orthodox double monastery (men and women), and several other churches. We also saw the very popular Gate of Dawn chapel with its image of Our Lady of Mercy, located at the top of the gate’s arch.

We stayed at the provincial headquarters in Vilnius and caught our flights the following day.

Lithuanian hospitality is second to none!