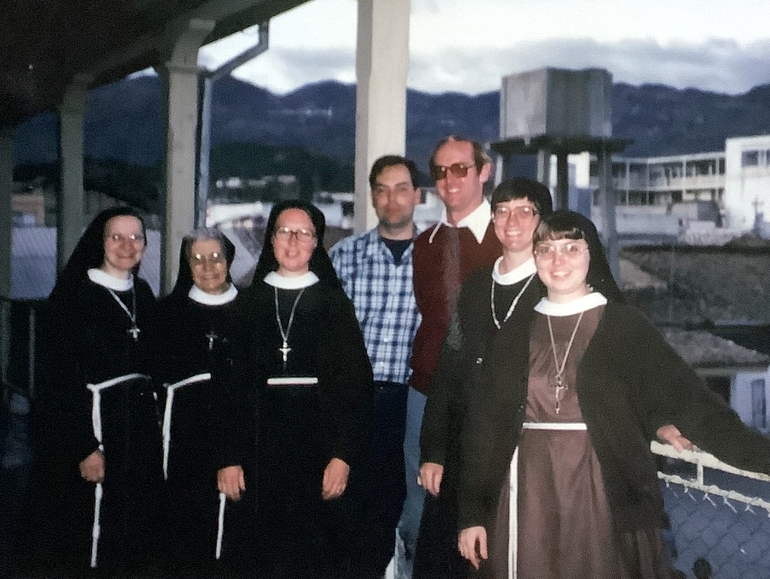 A time of war, a time of grace

The military sought to conscript indigenous youth, only to be thwarted by a religious community determined to educate the young men. One of those leading the way was Br. James Miller, a teacher and vice-principal at a Christian Brothers school in the western highlands. 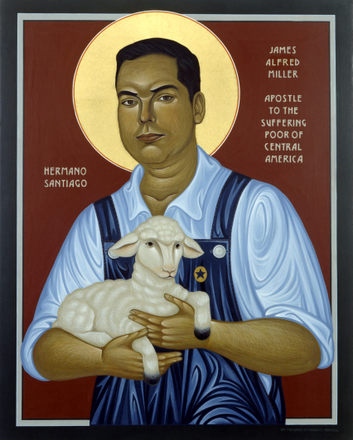 An iconographer drew upon the Wisconsin farm roots of Blessed James Miller, FSC, for this image.

On the morning of Feb. 13, Jim was helping some newly arrived Sisters design the guest quarters for their monastery in Huehuetenango. “The building has tile,” he told the Poor Clares, “and it’s either dusty or wet and musty.” They would need special mops for cleaning that he promised to procure. Anxious to return home, he left around noon.

A few hours later, Jim was dead, murdered by three masked men in hoods who were never identified. He was 37 years old.

On Dec. 7, 2019, Br. James Miller, known to his students as Hermano Santiago, became the first De La Salle Christian Brother from the United States to be beatified as a martyr for education. As the world marked the 38th anniversary of his death on Feb. 13, the memory that haunts Poor Clare Sr. Doris Gerke is the last conversation she had with Jim – a simple exchange about mops. One of his friends and colleagues, she was part of the Sisters’ prayer community in Huehuetenango and saw him on the day he died. “He was a wonderful, wonderful man,” she says of a Brother known for his intelligence, his simplicity, and his devotion to the suffering poor.

Today, Doris is part of the community at the Monastery of St. Clare in Cincinnati, closely affiliated with the friars of St. John the Baptist Province. In 1980, shortly after her solemn profession, she was one of five Poor Clare Sisters in Memphis, Tenn., who responded to a call for volunteers from Guatemalan Bishop Hugo Martinez. “There was a civil war in progress, and he was losing a lot of his people, not just religious,” Doris says. “He asked if there was a community that could send some people down to pray.” 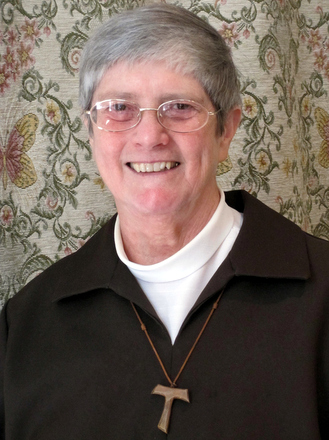 Warned by the Bishop of Memphis of the powder-keg conditions in Central America, “I remember thinking, ‘This is serious, a big decision,’ ” Doris says. In January of 1980, the Guatemalan Army torched the Spanish Embassy, killing 36 people who had occupied the building to protest the kidnapping and murder of peasants. In El Salvador, “Archbishop Oscar Romero had been killed” in March for speaking out for the oppressed.

Doris and her Sister Clares would be based in Huehuetenango, Guatemala, near a large military base. The army was running the country, and, “We would be in the middle of it.” Promised their own living quarters, they found no monastery when they arrived in Guatemala in December of 1981. While it was being built, “The Bishop opened part of his catechetical center to us” about a mile from the construction site.

“That’s how we got to know Jim Miller,” a staff member at Casa Indigena De La Salle, a residence for Mayan students affiliated with nearby Colegio De La Salle. With scholarships from the De La Salle Brothers and a safe place to live, boys from local villages could obtain a high school degree and be qualified to enter a university – a remarkable achievement for rural Guatemalans.

This did not sit well with the military, according to Doris. “The army would come into the city on Sunday and seal it off and grab all these men and conscript them involuntarily for the army. The army base was close, and the kids [from the school] would be at the park.” The students would also be abducted. 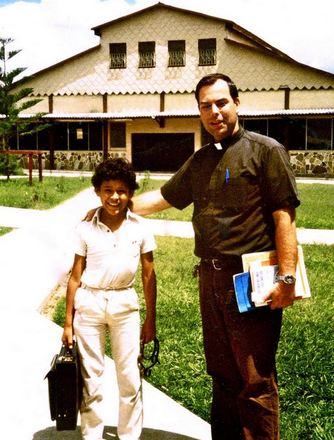 Br. Jim Miller with a student at the Colegio De La Salle

On Feb. 8 Br. Paul Joslin, a “sub-director” of the Colegio, went to the military base to plead for the release of students who had been “recruited”. Days later, in response, “The army threw a dead body in front of the Casa Indigena and shot up the building,” Doris says. Concern mounted for the safety of the boys and their teachers.

A mile away, work on the monastery proceeded. On most days, “Jim was helping us design the building as different things were going on,” Doris says. The morning of Feb. 13, while working on the guest quarters, he was preoccupied with other matters. “I’ve got to get back to the Casa Indigena,” he told the Sisters. The Brothers had planned a Valentine’s Day picnic for the youngsters. After that, he said, “I’ve got to get out and plaster the marks [on the building] from the bullets, because if I don’t we’re showing everyone there’s a problem, and the kids will be afraid.”

Around 4 p.m. that day, the Sisters were back in their rooms at the catechetical center. Responding to a knock, they found a distraught Bishop Martinez. “He opened each of our doors and said, ‘Stay in your rooms,’ Doris says. “Hermano Santiago’s been shot.’” 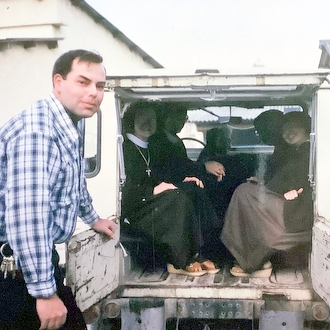 At 7 p.m., he called them together to break the news. “Jim’s been killed. He was up on a ladder trying to fill in the holes from the bullets.” Sisters on the street who had witnessed the shooting said, “They reached up and shot him in the neck. It was very quick; he probably didn’t see it coming.” Later, the Casa Indigena received a phone call with this message: “We shot the wrong one.” They had apparently been gunning for Paul.

“I don’t know if we were in shock,” Doris says, looking back on that day. “We were trying to hold things together. We cared for Jim and he was good to us; he was a close friend. We were close to the Christian Brothers and were concerned about them.”

As Jim’s body was returned to the U.S. for burial in his hometown in Wisconsin, religious men and women found themselves under increased scrutiny from the military in Guatemala, their license plates recorded, their movements traced. “It was a scary time. We also knew an Ursuline Sister who was tortured in Guatemala City, Diana Ortiz. Everybody knew someone in their family who had been tortured or killed. You kind of lived with the possibility. The military ran the country; this was the government of Guatemala. They grabbed people and drugged them and brainwashed them to kill people they knew.”

A month after Jim’s death, two Sisters were plucked from the outdoor market by drunken soldiers and delivered to the Bishop’s house. “Don’t leave your rooms,” the community was warned by Bishop Martinez. “Don’t go out without your [citizenship] papers.’ We couldn’t move other than go to the chapel,” Doris says. 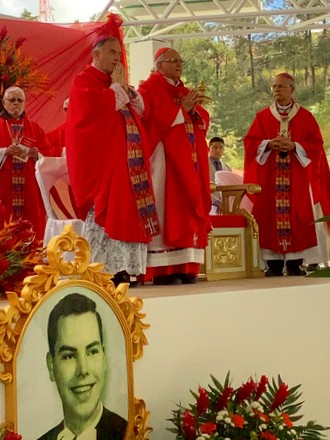 The beatification took place Dec. 7, 2019, on the soccer field where Br. Jim Miller once ministered.

After their Abbess, Sr. Peter, started having nightmares, she returned to Memphis. The other Clares stayed. “We didn’t know what would happen.”

When Doris left Guatemala in 1989, conditions had improved, leading to Peace Accords that were signed on Dec. 29, 1996, bringing an end to the 36-year-long civil war. Jim Miller was one of more than 150,000 civilians who died in the conflict.

The Diocese of Huehuetenango took up the cause for his beatification in 2009. One of its most vocal champions was Christian Br. Paul Joslin, the man whom many believe was the intended target the day Jim was killed. On Nov. 8, 2018, Pope Francis approved a degree recognizing that Br. James Miller died as a martyr. He was designated a Servant of God in 2010, and beatified Dec. 7, 2019, on the soccer field of the school in Guatemala where he once served. The continuation of the school and its mission is a fitting legacy.

Thirty-eight years later, Doris still ponders the impact of Jim’s death. “I keep thinking, ‘How can I honor him?’ I can honor him by telling the story.”

His life and his sacrifice exemplify “the wonderful religious who were there and what wonderful models of Christian living they were,” she says. “It was a privilege, a great grace to work with them. They were heroic – people taking their lives into their hands in the villages every day.

“They were just saints.” 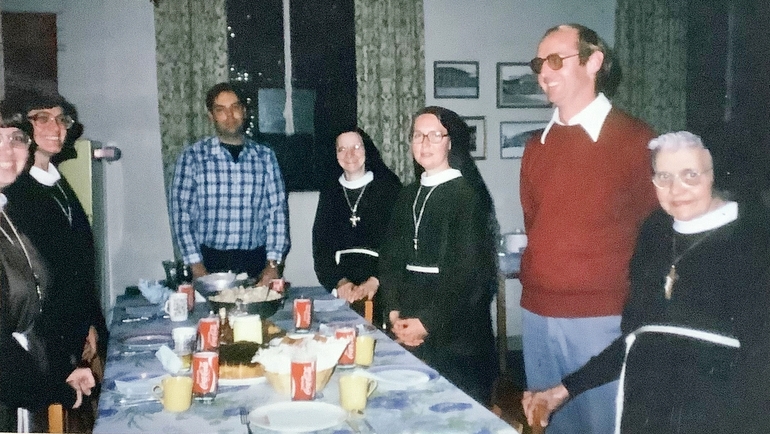 Dinner with the Poor Clares and Br. Paul in Huehuetenango shortly before Jim’s death.

Our man in Malta