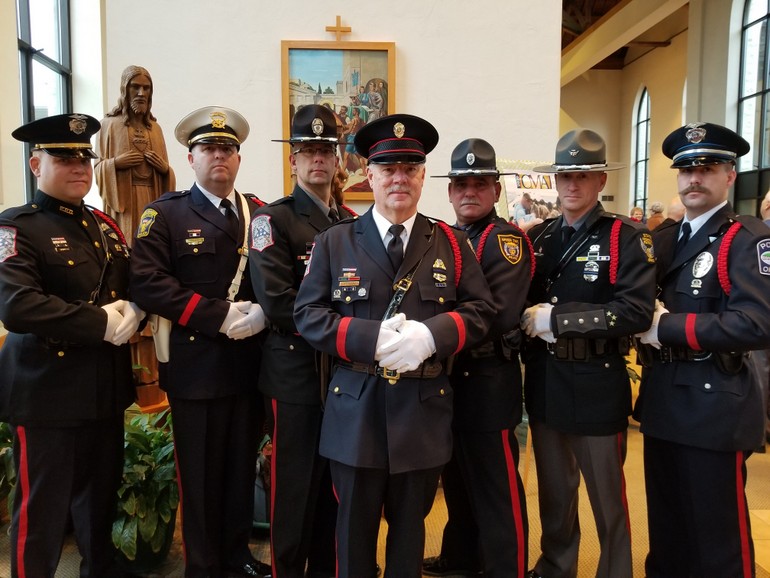 ‘A blessing to have him among us’

Friar Bruno Kremp had hundreds of brothers and sisters. 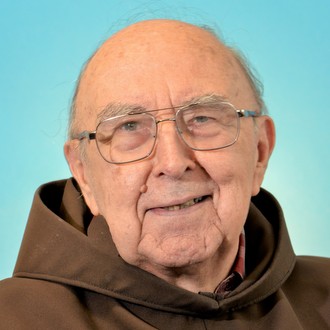 They were the parishioners who relied on his no-nonsense wisdom, members of the Kolping Society with whom he shared a common heritage, and police officers he worked with shoulder-to-shoulder in times of crisis.

Foremost, they were the friars who became brothers when his family left Germany for Cincinnati after enduring the horrors of World War II.

Many of them gathered Feb. 1 for Bruno’s funeral at St. Clement Church not only to honor and remember a loved one, but to console each other after his unexpected death. Among them were more than two dozen police officers, including former Hamilton County Sheriff Simon Leis and current Sheriff Jim Neil, all of whom called Bruno “brother”. Officers carried his casket, read the scriptures and stood at respectful attention during visitation.

“Every one of us in uniform today probably knew him,” said Officer Ken Poppe, a 31-year veteran of the Hamilton County Sheriff’s Dept. and part of the Honor Guard at the funeral. As founder of the county’s Police Chaplains Team, Bruno had comforted or counseled many of them, as well as the stricken families of victims of violence. “He knew the trials and tribulations we had,” said Officer Phil Cannon. “It was a blessing to have him among us.” 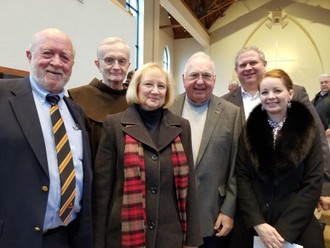 Police are “very guarded with people they let into their lives,” said Officer Dennis Goebel. Bruno was one of them. “He was very calming all the time. ‘A good guy’ is the best way to say it.” A survivor of bombing and displacement in his native Germany, Bruno knew all about trauma and its aftermath.

That was just one facet of the compelling life story that unfolded at the funeral. Bruno was multitasking long before they had a name for it, serving in parish and retreat ministry, as a police and hospital chaplain, a vocation director, and a judge with the archdiocesan marriage tribunal – often juggling several jobs. Thirty years ago, “He did my annulment for me and didn’t charge me a penny,” said one woman who never forgot Bruno’s generosity. “He did everything with such style and grace. He was all in with whatever he did. He had open hands to what God had in store for him.”

As longtime spiritual director or Praeses for the Cincinnati Catholic Kolping Society, Bruno was an esteemed adviser. He and member Mike Pelzel, who wrote a history of the the Kolping Society’s German heritage and service in Cincinnati, shared a passion for genealogy. “He could talk on any subject,” said Mike, “but was always interested in what you had to say. He just made everybody feel welcome when he came.” There are only three portraits mounted on the wall of the Kolping Clubhouse: the previous Praeses, the Founder of Kolping International, and Bruno Kremp. 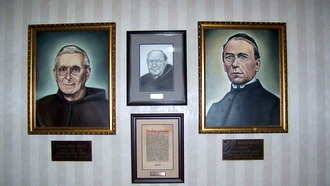 A portrait of Fr. Bruno, center, is one of three displayed at the Kolping Clubhouse.

In 1987 Sheriff Neil, then a young rookie, was involved in a shooting. “I requested that my father and Fr. Bruno be there for the investigation after the incident,” he said. “I got to experience his very fine work. He reassured me that, spiritually, everything would be all right. As a recipient of his wisdom, I think he was who he was because of his own experience. Think about his childhood” in war-ravaged Germany. “He had to deal with it himself, and what made him all the more special was how he dealt with it.” In 1998, the Hamilton County Police Assn. recognized Bruno’s commitment and compassion with a Lifetime Achievement Award.

In later years when this seemingly inexhaustible friar retired and dementia fogged his mind and memories, he found another family, the caregivers at St. John the Baptist Friary in Sharonville. Several years ago, “I knew him as chaplain at Mercy West hospital,” said Mindy Cole, a nurse at the friary. “I felt like he was part of my family. I loved him like my own. I felt a personal and spiritual connection more than clinical.” She and colleague Jim Nichols, both of whom had Hospice experience, sat with Bruno in his final hours. “We were his nurses but we took care of him like he was our dad,” said Mindy, who informed the hospital staff, “We’re not here as Hospice nurses. We’re here as Bruno’s family.” 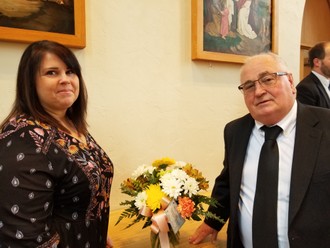 Looking over pews filled with Bruno’s extended families, celebrant Mark Soehner greeted them all. “Welcome to those of the Kolping Society, the many law enforcement involved in Bruno’s life, people from many parishes. Life is changed for Bruno, but it is not ended.”

Readings from Isaiah and Philippians by Hamilton County Chief Deputy Mark Schoonover and Nancy Pelzel of Kolping paralleled the devastation and deliverance that enveloped Bruno and his family during and after the war.

And they particularly resonated with homilist Dan Kroger, the grandson of German immigrants and Bruno’s successor as Praeses for the Kolping Society.

“We’re all here in some way because Fr. Bruno touched all of our lives,” said Dan, who connected the readings about the Israelites with Bruno’s harrowing life story. “Bruno was born in the very difficult time of World War II.” His soldier-father became a prisoner of war. His grandmother and an uncle died in bombing raids. “He saw an awful lot for the youngster he was.” 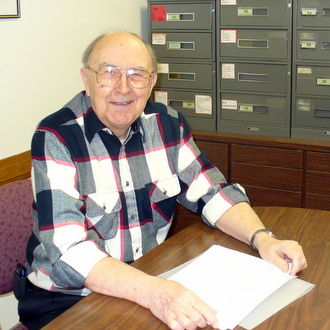 Fr. Bruno at the Family History Center in 2012

As for today’s scriptures, “They are intended to give us reasons, symbols, signs of why we are here and the way in which God works. What a tough time it was in Israel…the once proud chosen people were utterly desolate,” as were the people of a shattered Germany. “The kingdom of God is that way. The Lord works in special ways. We are citizens of heaven beyond any nationality or religion. It’s a powerful thing to think of the way God works in our lives.”

Dan related stories from the Reception about Bruno’s frontline work with the police and the support he gave when it was most needed. “He was a chaplain for the FBI as well,” said retired agent Dennis Lengle, who trained months for a particular firing-range test in Quantico, Va. Bruno, in Quantico for two weeks, “volunteered to be a witness for my success or failure,” Dennis said. Bruno encouraged him, “You can do it.” When the marksmanship test ended, Dennis was told, “‘Congratulations, you made it.’ Bruno looked at me and said, ‘With God’s intervention.’”

It was just like Bruno to put things in perspective. 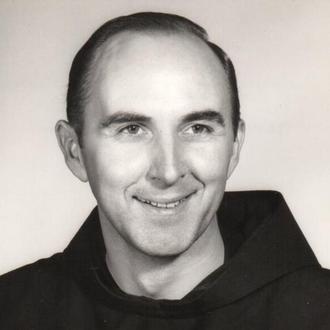 Fr. Bruno as a young priest

As Dan said, “It makes one realize how our individual human lives touch and are touched by others. Bruno suffered difficulties the war wrought.” During the war when Bruno was 6 or 7 years old, his parents moved him from Stuttgart to the countryside for safety, but “He had witnessed the bombing of his hometown and saw the way in which destruction occurred.” He also experienced the lack of respect for the vanquished. “One incident I heard from Bruno. As a kid he asked an American soldier for a cigarette. The soldier lit it and threw it on the ground and stomped it out.” Bruno took it to heart.

“He had the good fortune of a godfather who sponsored him” when the family left Germany for America. “Somehow in all of this Bruno grew in faith and learned about life from all the things he suffered.” Despite everything he had seen, he managed to retain his sense of humor, Dan said. One day while Bruno was preaching as pastor of St. Clement, “A woman in church brought a baby who was a real screamer.” When she started moving toward the door, Bruno said, “That’s all right ma’am; he’s not bothering me.” The mother replied, “Yeah, but you’re bothering the kid.”

The pastor in Bruno surfaced, wherever he served. “Bruno had quite a career,” Dan said. “Good grief, he worked in so many parishes, a couple of hospitals. Bruno was never one to turn down a job or request. He grew and grew in God’s grace.” 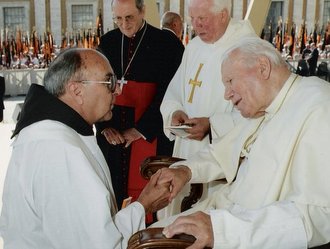 Asked to be Praeses of the Kolping Society, “He served 17 years until he got very weak,” then passed the torch to Dan, who was advised, “Do whatever you think is good, but talk to people. His spirit still lives on there.” After a pilgrimage to Rome for the 10th anniversary of the beatification of founder Adolph Kolping, “Bruno was thrilled to be part of it and be presented to Pope John Paul II.” He later told Dan, “Whatever you do, tell members to live the values of Fr. Kolping. Honor the values you see.”

Some things are “so deep in our faith it’s hard for us to remember how God touched us,” Dan said. Bruno was often the agent. “He served a lot of people,” said Dan, who could picture Bruno with his just rewards. “He loved to smoke his pipe; he also liked his dark beer. I’m sure he’s in heaven drinking a dunkel with whomever. God bless him.”

After the Mass, police gathered outside St. Clement for a slow-motion, precision salute as Bruno’s casket was carried down the steps. Officer Cannon said what many others at the funeral were probably thinking: 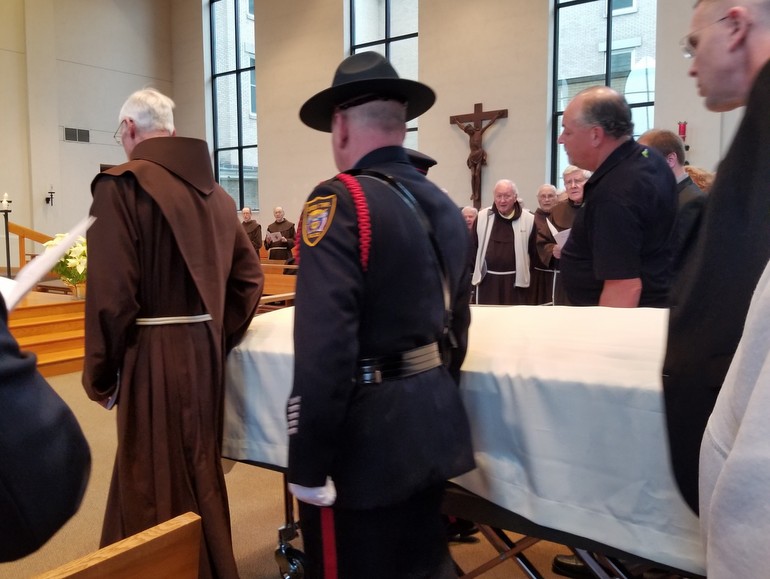 Fr. Bruno was the father I never had. He was pastor at St. George Parish when I went to school there. He was caring, loving and a disciplinarian. 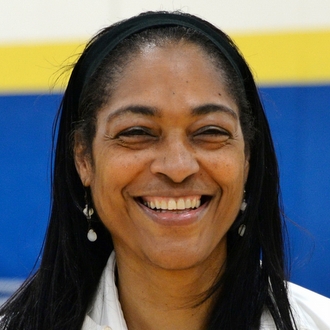 What I remember most about Bruno was the time I tried marijuana with friends.

I was on Clifton Avenue at around 3 a.m. I was scared and high, and I called my “father”, Fr. Bruno. He was in bed with a 101-degree fever. He got out of bed and came to picked me up, thinking I was in danger. I got into the car giggling and acting out of character because of the marijuana. He said, “Young lady, I am disappointed and I am very sick, so we will not talk about this tonight.” He dropped me off at Anna Louise Inn, where I lived at the time. You better believe he gave me a stern lecture later, and believe it or not, that was the last time I ever did any marijuana.

He was a great guy. He was instrumental in my growth and development as a young lady and a good person. Without knowing it he probably changed the direction of my life and helped to make me the person I am today.

(Annie is Executive Director of Friars Club in Cincinnati.)