A lifeline for online learners 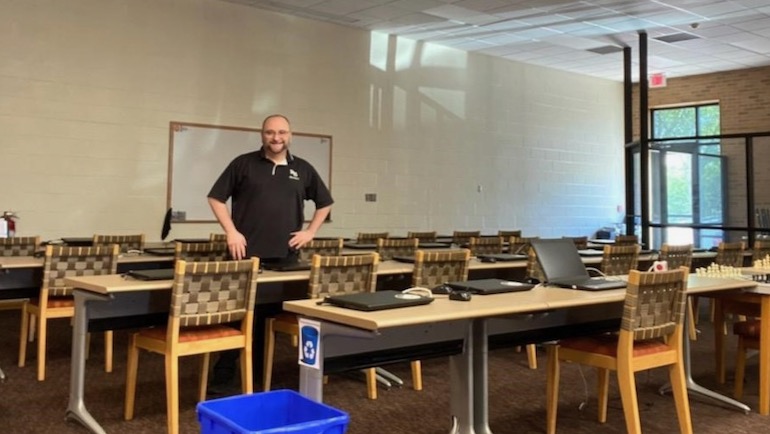 Fr. Mark Hudak, OFM, in the Information Technology Center, which would typically be filled with students.

Thanks to IT people like Fr. Mark Hudak, more than 55 million U.S. students are learning remotely. In a time of COVID-19 quarantine, connecting kids with teachers gives them some semblance of normalcy. It’s a job Mark does quietly and capably at Roger Bacon High School in St. Bernard.

He’s there four mornings a week, the sole occupant of the vast Information Technology Center, as online learning plays out in virtual classrooms across the area. The biggest adjustment, he says, was “sitting with the kind of odd stillness this has created.” The silence is broken by the occasional presence of school therapy dog Sisi, when handler Brandon Spaeth, Assistant Athletic Director, drops her off for a visit. Then, “Praise the Lord, I have a companion to hang out with,” Mark says. 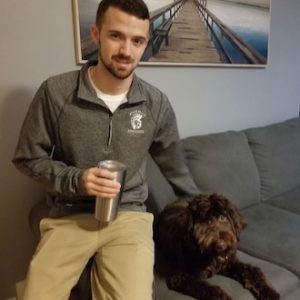 While his work is much the same as before – resolving hardware issues – the atmosphere is decidedly different.

“It’s like a ghost town,” says Mark, who misses the hubbub that screeched to a halt last month when Bacon joined other private and public Ohio schools in a forced lockdown to stem the spread of the coronavirus pandemic.

But unlike some schools, Roger Bacon saw it coming. “In the early stages [of COVID-19], Principal Steve Schad was proactive at holding afterschool meetings to share things that we needed to anticipate for the school to become online,” Mark says. When Ohio’s K-12 schools were ordered to close at the end of the day on March 16, Bacon had a plan in place.

Priority No. 1 was “making sure I was sending teachers home with PCs that actually work. There was a quick rush to make sure updates were happening, and that people didn’t have hardware issues.”

Students were familiar with Spartan Link, a website-based application that allowed them to log onto any device that is web-enabled. “It wasn’t like, if your iPad battery died you were ruined for the day. You could grab another device.” 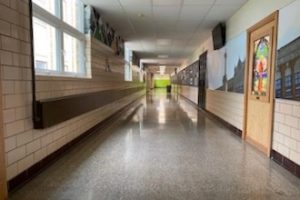 Fr. Mark had trouble adjusting to “the kind of odd stillness this has created.”

An early challenge: “There were some families – not many – who didn’t have internet yet. That precluded any education from taking place. The advancement people worked to get them connected.” Other households had to adapt to internet overload. “If they had five people online at once, it was like if they were all using the washing machine or flushing the toilet at the same time.” So they learned to monitor and compensate.

“In the IT department we were aware of technologies to teach a whole group of people, but there was a balance between usability and learnability,” Mark says. “Some have a lot of bells and whistles, but if it takes you a year to learn, it’s not all that useful. Then you have to balance practicality against security,” as when reports surfaced that Zoom hackers were crashing meetings with pornography or racist rants.

“In the early days of this, a whole bunch of people were scrambling to find applications for recording themselves. Zoom

became really popular really fast,” accompanied by “an explosion of concern about privacy, and how to use it. People like me who understand more directly how security works know the risks and some very basic steps that could be taken” to avoid Zoom-bombing, like generating a random number for use by meeting participants and never announcing meetings on public platforms. 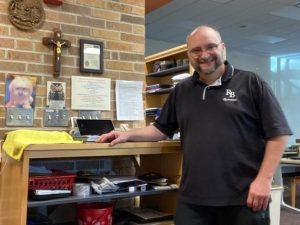 On a typical day, Mark puts in time at home before leaving for school. “I’ll sit at the kitchen table and look at my email to anticipate requests that came in. I’ve specifically informed clients that the subject line needs to have the word ‘help’ in it. On the average day I sift through at least a screen full of mail” that he color-codes to sort by category, red being urgent. “A teacher who can’t get a computer to turn on is a red alert. Passwords are a standard problem; a lot of people will forget them, and after so many missed tries, it locks their account.”

Fortunately, “If they’re able to get signed in I can remotely take over the PC over the internet and work on it. If I see an error I’m able to alert them to that. Often that solves the problem.” Sometimes the answer is simple. Recently, “A teacher was entering an assignment and filled out all the forms,” but the session timed out and the work was lost. Mark’s advice: “The minute you put data in, go down to the bottom of the page and click ‘Save’.” Mistakes can also happen when information is entered repeatedly, “So you teach people to use ‘copy and paste’.”

Frustration is common. “You’re trying to do your real job, teaching students, and it’s being prevented by some little slip-up like not pushing a button in time. But I’m not in the midst of the same frustration as the person who is experiencing the problem, so I come in with a fresh perspective. I’ll try solution after solution after solution until I find something that works.”

Finding the fix is one thing; making it understandable is another. For some, technology is an alien universe with a language all its own. So Mark heeds the advice of Principal Schad. Whatever the issue, “Explain it in 25 words or less.”

Teaching through a pandemic