Sharing his wit and wisdom 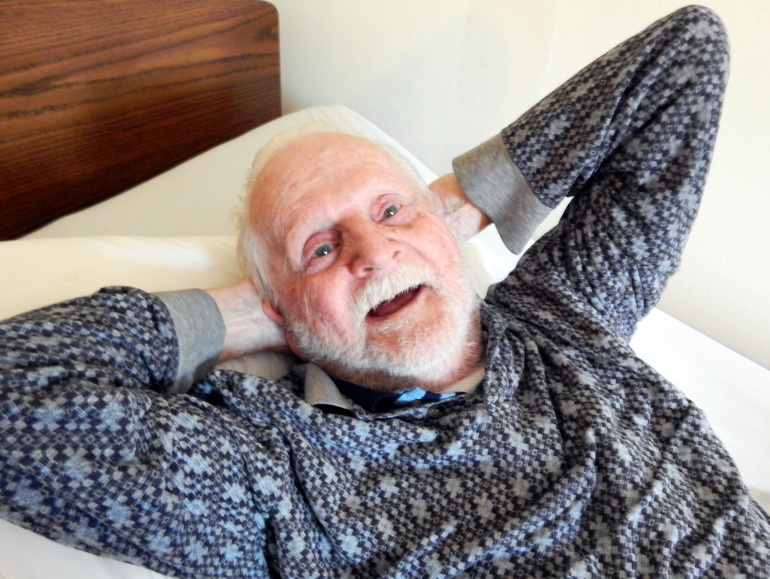 Fr. Miles Pfalzer has lived at St. Margaret Hall since 2014. He still likes to spin a good yarn.

(“Sadly, we lost Fr. Miles a week after our story was published, two days before his 100th birthday. As Provincial Minister Mark Soehner said, instead of becoming a centenarian, Fr. Miles was able to celebrate “his birthday into heaven.”)

A remarkable friar is about to turn 100

Friar Miles Pfalzer is the master of the snappy comeback. He can deflect questions with deadpan humor or tell a tall tale so earnestly it sounds believable.  At the age of 99, he hasn’t lost his touch. Do him a favor and he’ll say, “You shouldn’t have, but I’m glad you did.” Ask, “What’s the best thing about being retired?” and he responds, “I’ve been retired ever since I was born.” Take your leave and he replies, “Come back, but don’t rush.” 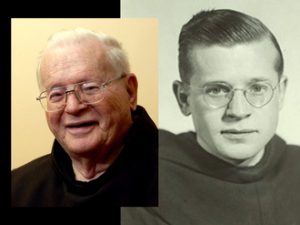 Fr. Miles Pfalzer as a young priest and the senior of the province.

“I notice he does use his sense of humor in interacting with the staff,” says Christie Lee, recently assigned as Miles’ social worker at St. Margaret Hall in Cincinnati, where he has lived in retirement since 2014. Like millions of other seniors, he is currently in isolation because of the COVID-19 pandemic. Today Christie is by his side for a phone interview in advance of an important birthday on June 5. God willing, Miles will be the first friar of St. John the Baptist Province to join the growing ranks of American centenarians.

He is unfazed by major events like his 100th birthday. In a life that began the same year Warren G. Harding was elected President, Miles has weathered the Roaring Twenties, the Great Depression, World War II, and a raft of assignments that required true grit.  Known for his dedication and calm perseverance, he has gamely tackled ministries from the Deep South to the Philippines to Michigan’s Upper Peninsula, working into his 90s, leaving his mark as a teacher, pastor and chaplain.

Since his memory clouded, forcing retirement, Miles is more apt to answer questions with, “I don’t remember.” But in a recent hour-long interview, it’s obvious that the wheels of wit are still spinning. Miles leaves it to his listeners to discern the truth from the near-truth and outright flights of fancy. Summing up his long life, he says, “I’ve always had lots of fun.” 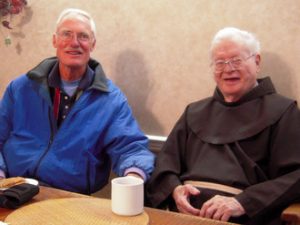 Of his childhood in Louisville, Ky., he says it was “one big, happy family, with five boys and two girls. Clarence was the oldest brother and Marie was the oldest sister. We used to say, ‘five boys and two dishwashers,’” although it was never said within earshot of the girls. All of his siblings, including friar brothers Juvenal and Roman, have since gone to heaven. “I’m the last of the Mohicans.” Mom Hulda was a homemaker, “a good cook,” and dad Carl, a sheet metal worker. With mom, “Our father always came first, and then the children.”

Social worker Christie confirms Miles’ boyhood love of sports. “You told me you got a new pair of roller skates for Christmas every year,” she reminds him. With no false modesty Miles says, “You’re talking to the best baseball and football player Louisville ever had.”

His propensity to stretch the truth has always been more endearing than exasperating. One of Miles’ favorite stories is how he helped the great Babe Ruth get to church.

Supposedly, “When I was young, one day these two men wanted to know where a Catholic Church was,” he says. “I wasn’t gonna show them a church that wasn’t Catholic and that wasn’t my own church. I said to them, ‘Follow me,’” and he led them to St. Brigid, his home parish. According to Miles, one of the men was Babe Ruth. Asked to name the other, he pauses for effect, then says, “Lou Gehrig,” one of the Babe’s New York Yankees teammates. Miles says he doesn’t know what brought them to Louisville. And Lou wasn’t even Catholic, which makes the story a little hard to swallow. 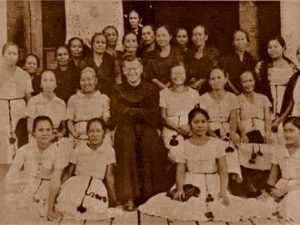 From the early 1960’s, with parishioners in Naval, Leyte, the Philippines.

Young Miles was an industrious fellow, gainfully employed. “When I was 12 or 13 I used to deliver newspapers, and I would stand on a corner at a grocery store. When the streetcar would stop, I would run up and down the streetcar, selling papers.” He also made money on the Kentucky Derby. “Kids used to bet each other 10 cents on a horse,” he explains. “It was profitable.”

In his teens, Miles followed older brothers Juvenal and Roman to St. John the Baptist Province and priesthood. His memories of St. Francis Seminary in Cincinnati are rosy. “It was happy days. There were a lot of other boys to play baseball and football with.”

But memories of his first assignment as a priest at Our Lady of Good Harbor parish in Buras, La., have faded. After nine years in the South, he joined SJB’s fledgling mission to the Philippines in 1956. “It was hot, hot, hot,” is his comeback to, “What was life like as a missionary?” An anonymous letter in Miles’ personnel filereads, “Fr. Miles was among the first four Franciscans to come this island, and he has done much to improve the conditions of the Church.”

That same letter, presumably written by an associate, recounts a harrowing experience in the late 1960s during Miles’ time as pastor in Kawayan on the island of Leyte. While inspecting repairs in a mission chapel, he stepped on a nail. Two days away from the nearest hospital, Miles gave himself first aid and returned to work. Thirteen days later, he was nearly dead from lockjaw. Discovered immobile in his room, he was taken by boat to an emergency hospital, where Sr. Annette, a Mishawaka Franciscan, kept a two-week vigil by his side. The recovery was slow and excruciating.

It’s one story Miles will never forget. “I was afraid I was gonna die,” he says. “You step on a rusty nail, you don’t have much of a chance.” 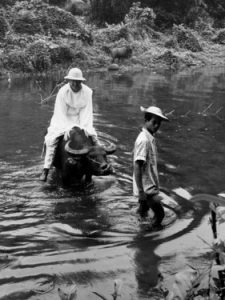 Fr. Miles says this photo from the Philippines was more for show than anything else.

There’s a famous photo of Miles crossing a river in the Philippines on the back of a carabao, an Asian water buffalo. For years it was used as a recruiting tool by the friars. He did indeed ride the carabao, Miles confirms. “The buffalo had horns I could grab onto.” But, he confesses, the “river” in question was about 6 inches deep.

From 1971-1988, Miles was a hospital chaplain in Kansas City, Mo., Baton Rouge, La., and Hamilton, Ohio. “I don’t remember,” he says, asked about its challenges. What he will say is, “The nurses were all very, very good at their jobs.”

What followed was his favorite assignment, in the wild and woolly Upper Peninsula of Michigan. “I liked the cold weather,” he says. “I enjoyed the snow,” all 300 inches per season of it. When the friars left the UP, Miles moved to St. Francis Retreat House in Easton, Pa., providing sacramental ministry for most of the 13years he lived there. (He is fondly remembered; see  Page 3.) Now he spends most of his time people-watching at St. Margaret Hall. “His room is near the elevator and nurses’ station,” says Christie, “so he’s got a lot of traffic. He’s mostly in his room, relaxing in his chair.”

What’s striking about the interview is what Miles doesn’t say. He seems to have no complaints and no regrets. When he is asked, “What’s the best thing about being a friar?” he replies, “There’s nothing bad about it.” 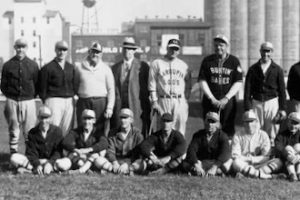 Postscript: Remember the story about Babe Ruth? We Googled “Babe Ruth, Lou Gehrig and Louisville.” A picture popped up from R. G. Potter’s book, Memories, Louisville’s Family Album. Taken at Parkway Field, it shows the Louisville Colonels minor league baseball team with guests Babe Ruth and Lou Gehrig. They were photographed Oct. 24, 1928 – so Miles could very well have met them.