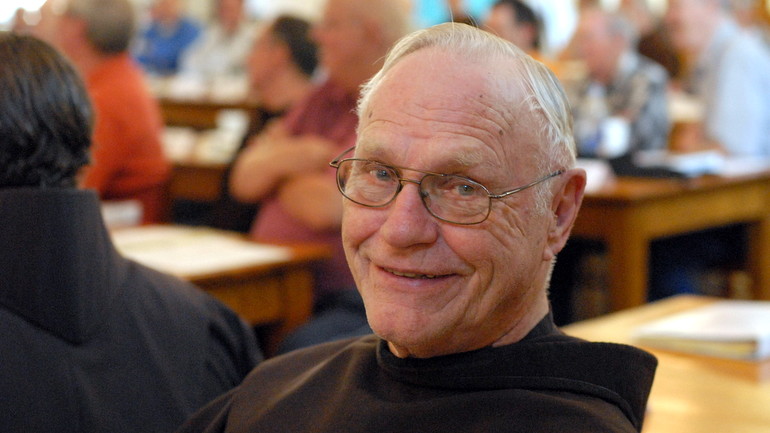 As it says in Romans, “Nothing can separate us from the love of God” – not even a pandemic.

Despite the masks and distancing, the funeral for Fr. Humbert Moster reflected that reassuring scripture. He believed it, preached it, and lived it in 60 years as a pastor, a chaplain and a missionary. 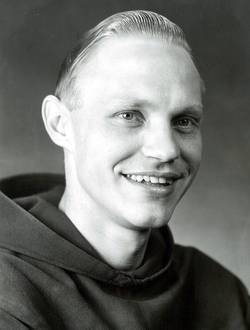 “Gone too soon” is not something we typically say when a 90-year-old friar dies. But Humbert still had a lot of living to do. And his unexpected passing on June 1 after a fall the day before felt like a life cut short.

Joyful, plain-spoken and self-effacing, he was the real McCoy. “I think he enjoyed everything he did in life,” homilist Jeremy Harrington said at Humbert’s funeral on June 5 at Holy Family Church in Oldenburg, Ind. Family, friars, friends, pretty much everyone who could fit into the church at safe social intervals agreed.

The separation dictated by COVID-19 was enforced by white ribbons blocking off every other pew. Masks muddled recognition among those arriving for visitation. Humbert’s extended family – he was one of 11 siblings – seemed to be everywhere. Brothers Leo, Ben, and Tony, the youngest at 84, came with their wives. Their sister, 101-year-old Beata Moloney, stayed safely at home.

The sharing of stories led to anecdotes about Humbert the carpenter, who left his mark on every parish he served. In Jamaica, he set about remodeling the friary and building a carport. When he took communion to rural areas, “Places were hard to find” because there were no street names or house numbers, said Max Langenderfer, who later served in Jamaica. Humbert decided to make signs, but the local ganja (cannabis) dealers objected. “People were afraid he would cause trouble for them,” by drawing undue attention, “so that didn’t go well.” 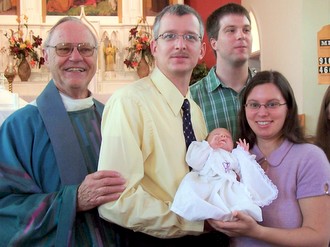 Fr. Humbert at a baptism

Humbert’s favorite hobby was playing cards; he never met a game he didn’t like. “I think he would have played four or five times a week if he could,” said his brother Tony. Was he good at it? “Oh, yes,” said Oldenburg Sr. Joan Schwacke, a Euchre-playing crony for 50 years. On the other hand, “I heard he sometimes overbid,” said Holy Family Pastor Carl Langenderfer.

According to celebrant Mark Soehner, “Everything about Humbert was honest and true – except for his card-playing.”

Homilist Jeremy amplified two passages from Romans, both reflecting Humbert’s outlook: “If God is for us, who can be against us?”; and, “Who can separate us from the love of God?” 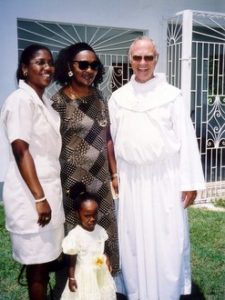 Fr. Humbert with parishioners in Jamaica

Jeremy and Jeff Scheeler were Humbert’s chosen homilists. Jeremy, two years behind Humbert at the seminary, said he twisted Jeff’s arm to get the assignment.  But Jeff sent this message: When SJB was planning a mission in Jamaica in 2000, “We needed lay brothers and we needed priests. If Fr. Humbert had not volunteered, we could not have accepted the new mission.’’

Humbert, then 70, offered to go. “It was typical of Humbert’s life and spirituality,” said Jeremy. “He was willing to take chances, venture into new things he didn’t have experience in because he trusted so much in God. ‘If God is for us, who can be against us?’”

In the 1960s, country boy Humbert was named pastor of St. Francis Seraph parish in inner-city Cincinnati. “I think it was a challenge for him to fit in,” but he wasn’t deterred. “After 20-something years in parish ministry, Humbert became a hospital chaplain.” His attitude was, ‘I’ve never been a hospital chaplain, but sure, if you ask and this is what God wants, I’ll do it willingly.”

When Jeremy surveyed friars, “Almost everybody said, ‘Humbert loved to work with his hands.’ He was always doing some kind of work in the parish,” evoking the end-of-life testament of St. Francis: “I earnestly desire my brothers give themselves to honest work.”

Humbert’s classmate Bert Heise told Jeremy, “He was always cheerful, a good-natured person, he took part in everything. I don’t think I ever saw him angry.” He happily accepted whatever came his way. 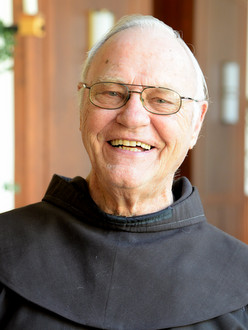 “The scriptures today capture our dependence and trust in God,” Jeremy said. “If God is for us, why do we worry somebody else is against us? What can separate us from the love of God? Death doesn’t separate us; it unites us with the great love God has for us. Jesus wants us to be with him. He wants Humbert to be with him.”

The day’s first reading from Isaiah was about the end of the world. Jeremy had recently been asked about that in light of the pandemic. “We don’t know when the end of the world will be,” he said, but as Isaiah reassures us, “God will destroy the veil that separates people. He will destroy death forever.” Isaiah also says, “Let us rejoice and be glad; God has saved us.” We can smile, as Humbert did, “because we believe down deep that God is with us.”

With COVID-19 interrupting our lives, “It’s hard to know what’s going to happen,” Jeremy said. But, “We know that God is with us and God is loving us,” no matter what. This was Humbert’s compass, his guiding light.

“We thank God for Humbert, for his witness and service. We all miss him and love him.”

After communion, Mark Soehner recalled the time when, as a young friar, he lived next door to Humbert. “I never experienced such mercy from God as when I went to confession with Humbert,” he said. “What a good man.” He repeated, almost to himself, “What a good man.”

Before the singing of the Ultima, Mark asked, “How many here are related to Humbert?”

The response was impressive, as, all over church, dozens of children and adults raised their hands. Even separated by masks and beribboned pews, they were one big, proud family.