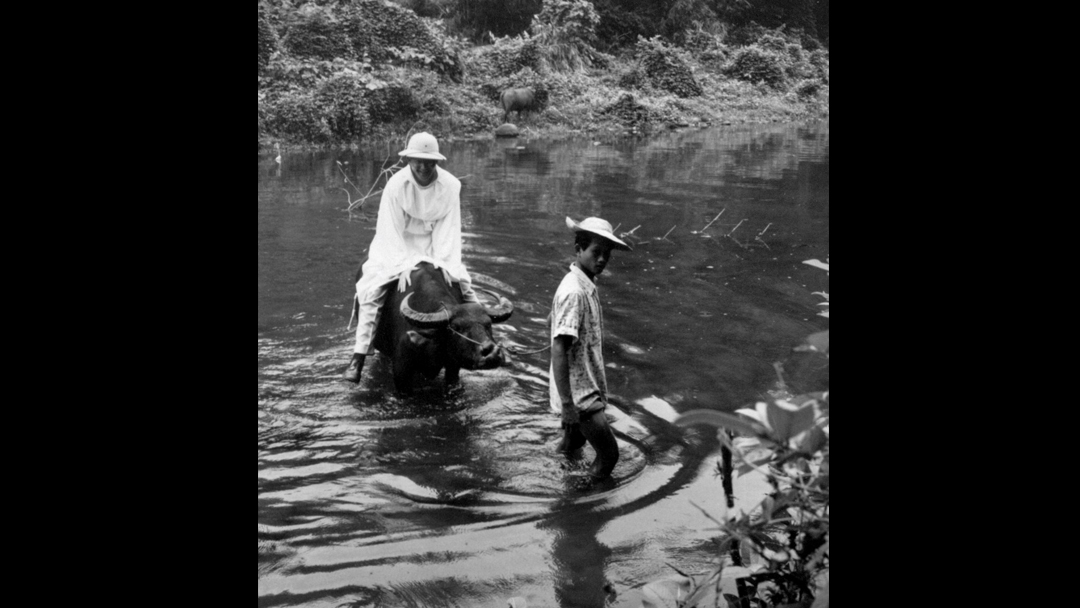 Fr. Miles Pfalzer, OFM, served as a missionary in the Philippines.

The legend lives on 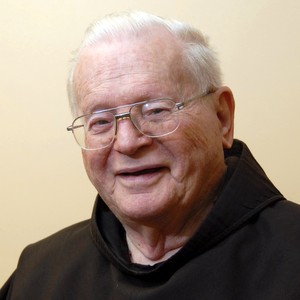 The stories they told at Miles Pfalzer’s funeral reflected a life lived fully, with heart and with humor. From the Deep South to the Philippines, from the Upper Peninsula of Michigan to a retreat house in Pennsylvania, Miles was always game for a new venture, wherever it took him.

“He seemed to volunteer for the assignments that were constantly new, on the edge, not where the majority of friars were heading,” said Provincial Mark Soehner. “He had a missionary spirit of adventure.”

Even without tall tales, Miles would still be a legend. The yarns he spun so skillfully only enhanced his long and adventurous life as a friar. Miles died June 3, just two days short of becoming the province’s first centenarian.

There was more celebration than sadness at his June 10 funeral at St. Clement Church in St. Bernard, Ohio. The “Happy 100th” birthday sign that had been made for his room at St. Margaret Hall was re-purposed for church, cheerfully greeting all who arrived for Mass. With Miles’ family unable to attend – the funeral was livestreamed because of COVID-19 – the audience largely consisted of friars, most of whom knew the Paul Bunyan-esque folklore associated with Miles.

As he was quoted as saying, “All the stories I tell you are true – and some of them actually happened!”

Believe it or not

Twenty years ago when friars left the UP, Provincial Fred Link told Miles about a blended community at a retreat house with friars from SJB Province and the former Vice Province of the Holy Savior. “This is great,” said Miles, asked if he were interested. As Fred learned, “Miles was open to new and exciting things.”

Dan Kroger, who served in the Philippines after Miles, said, “He was something of a legend in the town of Kawayan” on Leyte because of a near-death experience. “He stepped on a nail and developed lockjaw.” It was touch-and-go until a doctor’s error in dosage was detected and corrected by a Mishawaka Sister who knew better. Miles recovered and lived to tell the tale – often.

Stretching the truth was Miles’ specialty. He told visitors at St. Francis Retreat House he was an adviser to the Pope. “You never knew if he was telling the truth,” said Dan Anderson. “Maybe he was.” But he seemed to enjoy his listeners’ gullibility. 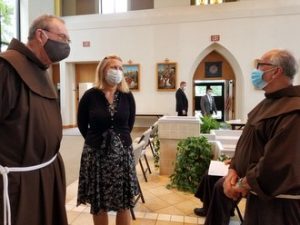 Mark Soehner’s homily drew frequent, knowing nods of agreement. “Miles was quite a character, only a bit of which I knew,” he said. “I’ll try to tell stories from the tiny seed of Miles’ life that I remember, I regret and I rejoice.”

First came family, Miles as one of three friar brothers who shared a love of laughter. Mark met Miles years ago at a Provincial Chapter “in the company of his brothers, Juvenal and Roman. They were a formidable group, and loved to tease the person joining their company.” They could “dish it out,” and Mark quickly learned, “I’d better be prepared to dish a little bit back.”

At the retreat house in Easton, Pa., Miles often held forth in the dining room. “Miles could spin tales during the morning coffee hour about becoming a Cardinal and the Pope needing to call him to get his opinion on matters. I know there were a few there who believed him!”

What Celano said of St. Francis – he had a “holy newness” – could also be said of Miles, who never lost his sense of wonder. He marveled at the care he received in retirement at St. Margaret Hall. Supposedly, a caregiver once asked if he needed anything in the middle of the night. As Miles told Mark, “I said, just to be smart, ‘Yeah, a chocolate ice cream cone! Do you know that the guy went out at 2 in the morning to UDF and got me a chocolate ice cream cone! That’s what I call service!” 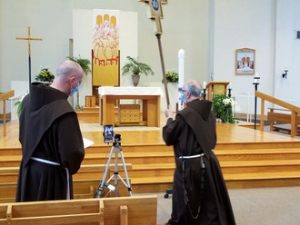 Besides those “small seeds” of remembrance, “I also regret,” Mark said. “I regret that Miles didn’t make it to his 100th birthday. More, I regret that I didn’t know Miles in his younger self,” when that missionary spirit led him from Buras, La., to Cebu in the Philippines for language school, then on to Leyte. The quintessential Miles was captured “in an iconic photo crossing the river on a water buffalo.” Never mind that the “river” was more like
a creek.

“Then, as if he couldn’t get enough newness, he headed to Kansas City, Baton Rouge and Hamilton, Ohio, as a hospital chaplain,” went north to the Upper Peninsula, his favorite assignment, then helped form a team at the retreat house. “I regret not knowing that ever-young missionary spirit that was up for the next new adventure,” Mark said. “I regret that this holy newness is now still.”

But there is reason to rejoice. “I rejoice that Miles allowed the seed of Jesus to fall into his heart and bear much fruit. I rejoice that Miles allowed Christ to take over his life in every detail. His willingness to embrace ‘the new’ came at a cost. Every time one of us moves, it feels a bit like dying, of letting go of a world that we know, and accepting a new world. Miles seemed to do so with joy.” 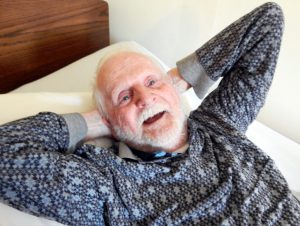 And one of his joys was putting people on. Mark told a classic story that was shared by Mark Ligett in a booklet created for the 100th birthday Miles almost reached. One evening with friars and guests at the retreat house, Miles spoke in great detail about his missionary work. “Then suddenly,” Mark Ligett wrote, “he began to talk about his life in Australia! Australia?!?!?! Miles was never in Australia, but our guests (and even some of the friars!) seemed clueless to this reality.” Complete with a pet kangaroo, it was a tapestry of a tale as only Miles could weave it.

Whether they were true or not, “Those stories allowed him to share his love of adventure, a deep-down freshness that comes from an engaged Franciscan life,” Mark Soehner said. “We rejoice with you Miles, that after you died this time, you awoke to a new birthday, a few days before your old one, surrounded by your family. Maybe even that pet kangaroo.

“You allowed the seed of Christ to fall into your heart and change you. We’ll miss your charm and funny way you could get us to laugh. And are glad that you are on the next adventure, producing much fruit that is actually happening.”