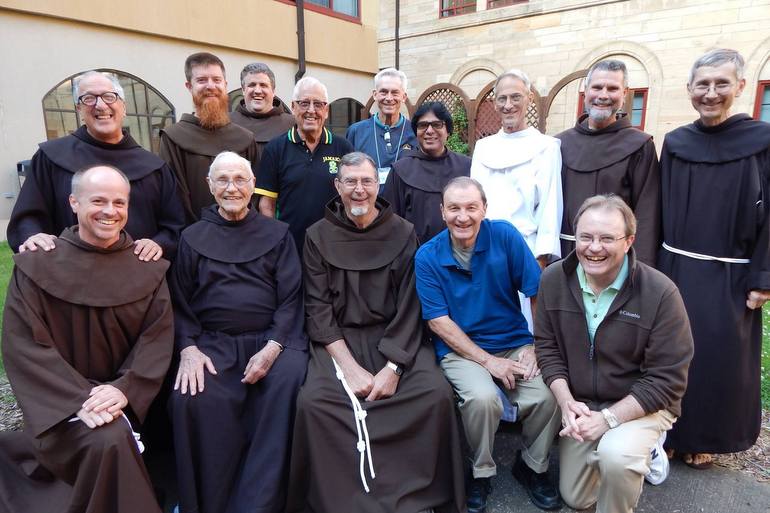 Blane Grein, OFM
What I remember best is the spirit of the liturgies—people with big smiles on their faces, bodies and arms moving to the beat of the music, interacting with the people nearby. The spirit was catching. The joy of the Spirit at work filling their hearts was evident.

Tom Gerchak, OFM
When I was living at Mary, Gate of Heaven Friary in Negril there was a young homeless man camped out perhaps a half-mile down the road. He stopped by twice to express his anger at something that had happened to him. I was happy to see him leave the friary with a big smile and hear him say, “We must forgive.” This reminds me of how (then Bishop) Charles Dufour often spoke of forgiveness in his homilies. 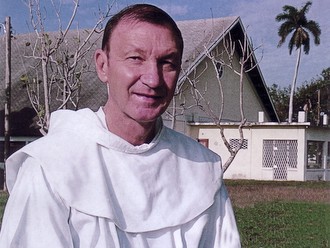 Joe Hund, OFM
Being in Jamaica deepened my understanding of the history, culture and peoples of Jamaica and other islands. Preaching for Food for the Poor made it possible to enlighten people in the U.S. about their neighbor to the South. Food for the Poor supplied our church and neighbors in Sav la-mar with food products and some church equipment.

A significant happening was the building of two new churches at Grange Hill and Little London after much documentation and seeking of funding. Before the churches were built the people were worshiping in small, uncomfortable classrooms. With the churches they now have a place to worship with dignity, a place which may attract other members.

Stephen Dupuis, OFM
(Assumption Province)
It’s the people who have had the greatest impact on my life here in Jamaica. I know a man named Lloyd who is dirt-poor. He always greets you with a smile as he says, “Let us give thanks to God that we have life,” or some similar statement. He truly is a joyful person. Another man named Dwayne took me under his wing and we became good spiritual friends. He lives his life on spiritual values.

My hopes for Jamaica? There is such a need here for health care, both physical and mental. We deal with people on a daily basis who need mental care but our hands are tied. 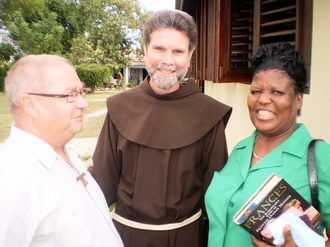 Mark Gehret, OFM
One of the events that I will always remember is Hurricane Ivan in 2004, a year before Katrina. I don’t know how many times during the years I lived there that someone would say that Hurricane Andrew was the worst ever. But after Hurricane Ivan, that was the “new” worst ever.

Vince Delorenzo and I made preparations in the friary and church and then a parishioner family, the Moo Youngs, offered us shelter in one of their cinder block hotel rooms to ride out the storm. Ms. Pearl Distin and her grandson stayed in another room. The hurricane winds and rain battered us for a night and the next day and night. It was a slow moving storm at 8 mph. I watched the palm trees bend over at 90 degrees during each wave of the rotation, with rain blowing sideways.

I think it ended late Friday night and John Joseph Gonchar came over Saturday afternoon to see the damage and whether we could have Mass on Sunday morning. The church was in decent shape but there were limbs and branches all over the yard and all along the road. I’m thinking we did have Mass Sunday morning. I remember going into town to check on parishioners and help them in any way I could. None of them were injured. I was surprised going down one street helping people and I saw some teenage boys sitting out on their porch and wondered to myself, why aren’t they helping their neighbors? It took several days for power to be restored and the streets to be cleaned up. That was the most violent storm I lived through. 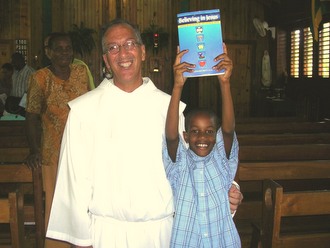 Vince Delorenzo, OFM
The impact that my ministry in Jamaica had on me was that it has made me very aware of how I make use of things—water, paper, food, etc. It has helped me simplify my lifestyle, knowing how people in Jamaica do not have access to many of things that I take for granted in the U.S. I am conscious of not letting the water run unnecessarily, of using both sides of paper and reusing paper when possible, as well as being appreciative of the food that I have.

Chris Meyer, OFM
The Franciscan presence on the Island of Jamaica has made considerable impact. We join a long history of dedicated Franciscans sharing the Gospel of Jesus Christ. The Province of St. John the Baptist continues the good work of the first Franciscans who arrived 500+ years ago on the coast of Jamaica’s St. Ann’s Bay and of the work of the Holy Name Province and Conventual Franciscans who served in the Archdiocese of Kingston.

Over our years of service we have nurtured souls, built homes, educated the youth, fed the hungry, shared our love for the Gospel, and honored the dead. We have done well what was ours to do in building up God’s Kingdom.
For my work with the Diocese of Montego Bay, I was able to travel extensively. There are many turns in the road where I was in awe and rejoiced by experiencing God’s creation. 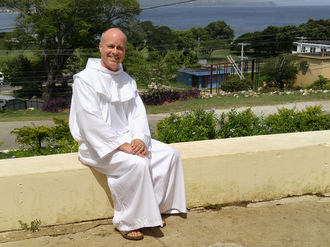 John Joseph Gonchar, OFM
It was a Sunday afternoon, shortly after I had arrived in Jamaica. I had finished my Mass assignments for the day and was in the friary in Savanna-la-mar. Suddenly I heard music blaring. I went to see what was what. Seeing people walking down the street in front of our friary, I imagined it was some sort of parade. Lo and behold, there came a hearse following the people. It was the source of the blaring music. They were all on their way to the cemetery from the Seventh Day Adventist church located near our friary.

I was struck by the great importance the Jamaican people placed on honoring their deceased. A funeral is a very important social event for them, as well. A meal is served on the vigil of the funeral and then on the day of the funeral itself, after the burial. The body would be held until certain family members or relatives living away or abroad could be present for the funeral service. The viewing of the body took place in the church just before the funeral service. They would also open the casket one last time for a final or, perhaps, a first look before it was lowered into the ground. (I almost got pushed into the grave on one occasion.) People would remain at the grave, singing their funeral choruses, until the grave had been completely covered.

Henry Beck, OFM
I had been feeling a call to work with persons in the African-American community before I left for Jamaica. Once there I was opened up to the blend of African and Caribbean cultures, and I felt more profoundly the toll that slavery can have on a people and a society. I was exposed more fully to the economic poverty there and to the affects of victimization and addiction on the people.

I also experienced steadfast and heroic persons of faith and resolve to care for their family members and strengthen Jamaican society. I was impressed by the grandparents and the young adults especially striving to develop healthy children for the future. I also learned things about myself, especially in terms of what I can adjust to and what I struggle with in another culture. Most of all, I am grateful for my time there as one where I was blessed with caring and mutual relationships with a core group of persons. My experiences in Jamaica deepened my prayer life and my self-understanding and widened my heart.

Called forth to Jamaica

Thanks for making a difference