Finding the man behind the myths 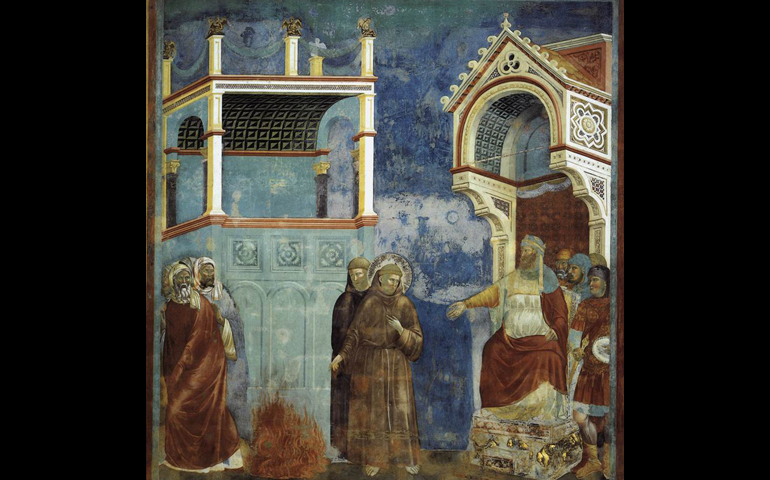 Giotto’s “St. Francis before the Sultan (Trial by Fire)”

Fr. Tom Speier didn’t set out to become a history detective. But his work in retreats and spiritual direction turned him into one. 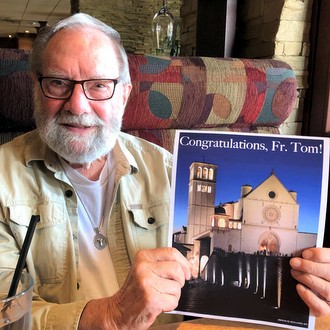 A card for Fr. Tom Speier at the celebratory lunch

The results of his sleuthing are presented in Chronology of Francis of Assisi and His Followers: 1181-1278 (Franciscan Media, https://shop.franciscanmedia.org/products/chronology-of-francis-of-assisi-and-his-followers-1181-1278). Complete with almost 500 footnotes, the book is a day-to-day account of historical events as opposed to the adulatory, idealized biographies that for centuries were accepted as gospel. It’s also the first commercially published work by 88-year-old Tom, who spent decades exploring the life of the saint.

The early chroniclers of Francis shared a common purpose. “They were interested in presenting a person to admire and imitate,” says Tom. “They weren’t interested in facts,” so they rationalized, “If we have to stretch the truth a little, what’s the difference?”

It’s like the myths surrounding George Washington, says Ray Taylor, Director of Advancement for Franciscan Media. It was Ray who championed Tom’s project, lining up donors to defray costs and shepherding the book through publication. “Did Washington really chop down the cherry tree? Probably not, but we know that truth was important to him.” As they did for Washington, myths about Francis reinforced his intrinsic virtues.

Tom was often asked about specific incidents during the Franciscan Spiritual Direction Programs he presented around the world starting in 1982. Did Francis preach to birds? Did he offer to walk through fire to convert the Sultan of Egypt? “People would ask if we could do a day-by-day life of Francis from history,” Tom says. “That’s when I got serious about it.” 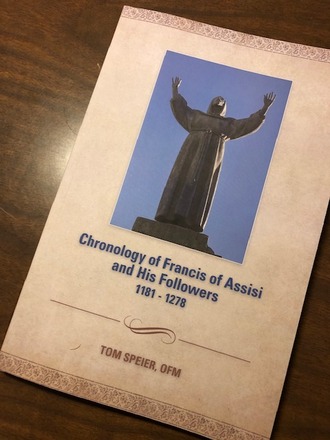 It took years of work and dedicated supporters to produce the book.

Little by little, “During the retreats, I was tracing back and finding, ‘We can’t prove this or we can’t prove that.’ Nobody could give me an answer. I wanted a faithful history of Francis’ life, not just all these little stories. Who’s the real Francis? What’s the background for this stuff? My scientific background spurred me on. I documented each source I could find,” and concluded, “If I can’t find it in print with a reputable historian, I can’t put it in” the timeline.

Tom was encouraged by the publication in 2012 of two seminal biographies: Francis of Assisi: The Life and Afterlife of a Medieval Saint, by Andre Vauchez; and Francis of Assisi: A New Biography, by Augustine Thompson. “They were the ones that told me there’s a whole new way of approaching Francis’ life, through history and not just through legends like Thomas of Celano.”

During a retreat out West, Tom asked historian Michael Blastic of Holy Name Province to review the research. “I asked him if it made sense. He said, ‘Keep digging.’ He’s the one who encouraged me to pursue what I was trying to do.” By 2010, Tom had exhausted the available sources. He had his material – now he needed an outlet.

One day at Mass at St. Francis Seraph, he asked Ray Taylor of Franciscan Media, “Is there a way to get this published?” FM was skeptical – it was too academic for wide distribution. “One of the brothers had a lifetime of work he committed to a book, and no one was listening,” said Ray, who took up the cause himself, sharing the material with Sr. Margaret Carney, OSF, former President of St. Bonaventure University. “This book is valuable,” she told Ray. Asked to read the manuscript, author-historian Bill Short of St. Barbara Province did what Ray calls “a light edit” of Tom’s material. “I’ll do it for my brother,” Bill had said.

“Let’s see if we can get this preserved,” said Ray. If they could obtain an ISBN [the number identifying a commercial book], “We could get it on the shelves” for limited release. Ray and his wife, Amy DeCesare, added their own funds to donations from Bill and Marlene Sparks and the Jasper Family Charitable Trust. With approval from FM President Kelly McCracken, Diane Houdek and Mark Sullivan prepared the book for publication. Thanks to digital technology, Ray says, “We can do ‘print on demand’,” allowing runs of single or small orders. Finally, the book was ready. Then came the pandemic. At publication, “We usually get together and celebrate with the author” in some sort of rollout. That wasn’t possible, so last month, Provincial Minister Mark Soehner and Frank Jasper took Tom to lunch, presenting the finished book and a congratulatory card designed by Mary Catherine Kozusko of Franciscan Media.

For Tom, the end result was worth the work. Finding the man behind the myth only increased his regard for St. Francis. “The year 1220 to 1221 was the big revelation for me, the ‘annus horribilis’, as Thompson called it, when Francis was getting ready to resign from the Order and felt he was losing control; to find out how his own brothers were trying to get rid of him. I ended up with wonder and admiration for what he had to go through the last six years of his life. Rather than diminish, it increased my admiration for his holiness to see what the actual facts tell us about Francis.”

As Ray learned, “There’s a root to some of the legends, but they aren’t so essential. Francis was real and he walked the earth in real places. There is the truth of Francis – and it is worthy without the legend.”

Chronology of Francis of Assisi and His Followers: 1181-1278, by Fr. Tom Speier, OFM, published by Franciscan Media.

We're all in this together