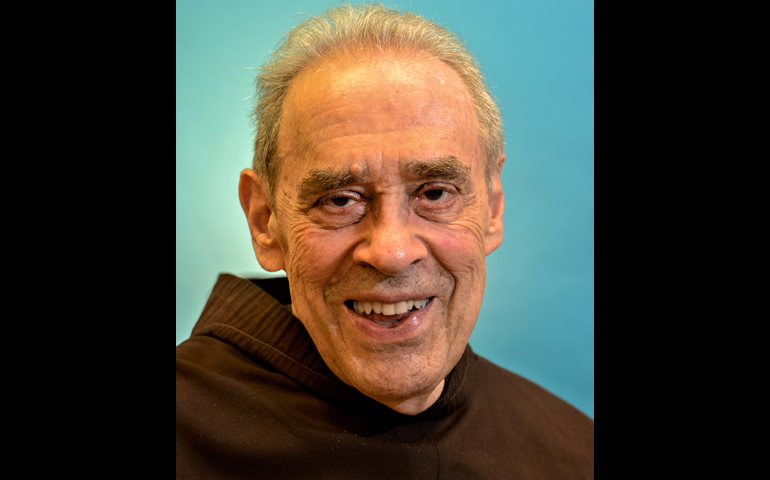 God blessed Tony Walter with a gentle nature and a selfless spirit – qualities that inspired affection in those he served and in those who knew him best. 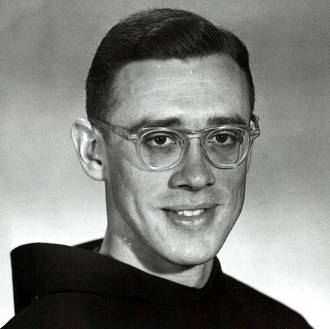 Tony as a young friar

Modest and laid-back, his Oct. 28 funeral in Cincinnati was evocative of the friar being celebrated.

“I want to welcome you to Tony’s homecoming here at St. Joseph Chapel,” said Gene Mayer, guardian of St. John the Baptist Friary, Tony’s final residence and the place where he passed away on Oct. 26 at the age of 88. In the warmly wood-paneled chapel adjacent to the friary, it did feel more like attending a funeral in someone’s home than in a typical church.

At the Reception the testimonials, some of them muffled by the masks required for safety, were insightful and good-humored, much like those at an Irish wake, minus the food and drink. “Living with Tony the last seven years,” Gene said, “we all know what a health nut he was,” zealous about exercise. Tony would amble around the friary courtyard 17 times to equal a walk of one mile. “He’d do that a couple of times a day. I think he thought he’d never die.” 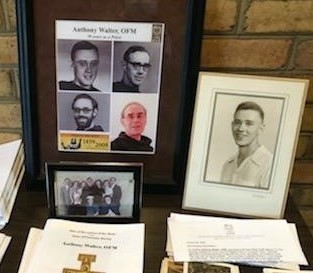 A photo display traced Tony’s journey as a friar.

In formation days at St. Leonard, Tony honed his tennis game in his room, next door to Ric Schneider. One day Ric heard a crash and went to see about his neighbor. Tony had swung so forcefully the bracket flew off his racket, broke the window and lodged in the storm window. “From now on,” Tony was told, “go outside.”

Creatively inclined, he was more fanciful than practical. When John Bok was guardian at SJB Friary, Tony complained about his room being cold. “What’s the deal here?” John asked, checking the problem. Turns out, “He had left a window open and didn’t know it. Genius that I am,” John said, “I solved the problem by closing the window.”

A niece at the funeral remembered the day her grandmother was washing dishes and sat out soapy glasses of water to soak. Fresh from exercise, Tony ran into the kitchen, “grabbed a quart jar full of soapy water, thinking it was milk, and drank it down.” 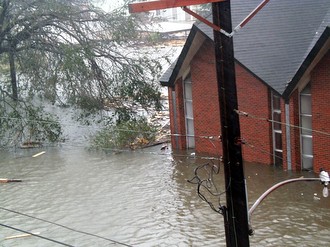 In flooding that followed Katrina, Tony and fellow friars sheltered neighbors at St. Mary of the Angels School in New Orleans.

The possessions Tony saved when he was airlifted off a school roof in the New Orleans floodwaters of Hurricane Katrina said a lot about priorities. “The only things he took with him were a Harry Potter book, his game of Scrabble and his habit,” said Carl Langenderfer.

“He was quite a pencil-sketcher and drawer,” Gene said. “I was amazed at some of the things I found when I was cleaning his room.”

Planning Tony’s funeral, Province Secretary Dan Anderson was impressed with how “he had everything laid out,” in listing his preferences. “One of the things that really touched me: He had different lyrics he suggested we sing for the ‘Alleluia’.” Next to an asterisk, Tony added the words, “I wrote this!” So today, Dan said, “We’re going to sing his ‘Alleluia’ verse for his funeral.” 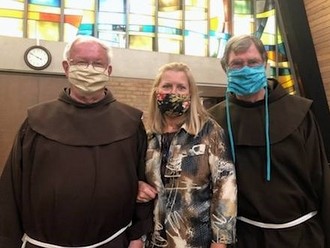 Hospitalized the week before he died, Tony returned to St. John the Baptist Friary when doctors confirmed they could do no more. “When he was in Hospice care, he was a little concerned that he might be in pain” with the approach of Sister Death, said fellow resident Tom Speier. “It’s OK,” Tom told Tony. “You’ve never done this before. I know you’re an artist. Draw a picture in your imagination of Jesus and Mary waiting for you with open arms. Draw a picture in your mind.” After that, “Tony had that little smile,” Tom said. “I think it gave him comfort.”

As celebrant, Provincial Minister Mark Soehner welcomed Tony’s family – two nieces, their husbands, a great-nephew and his wife – and noted, “It’s great to see this many friars [more than 25] gathered to say goodbye” in the midst of a pandemic, as well as those watching via Facebook livestream. 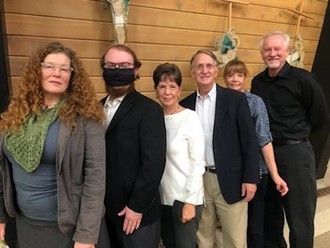 Tony’s nieces, their husbands, a great-nephew and his wife attended the funeral.

Tony’s older sister, advised to stay home for safety’s sake, was remembered. “I’m gonna do this for Mary Jo,” said Province Nurse Michelle Viacava, before giving the First Reading from Job (“I know that my redeemer lives.”) “I know she would love to be here and do this for her little brother.” Max Langenderfer read Revelation 14:13: “Blessed are the dead who die in the Lord from now on.” “Yes,” says the Spirit, “they will rest from their labor, for their deeds will follow them.”

Homilist John Bok shared reminiscences. “Memories live on and on in those left behind,” he said. “The memories I have of Tony go all the way back to college – Duns Scotus – and the last nine years I lived here [at SJB Friary]” as guardian.

“Brother Gene mentioned how Tony exercised and walked the courtyard. He was very faithful to doing that.” He had a similar routine at St. Francis Seraph in Over-the-Rhine, according to staffer Shirley Daugherty, “walking up and down Vine Street wearing a cowboy hat, with a big smile on his face.” 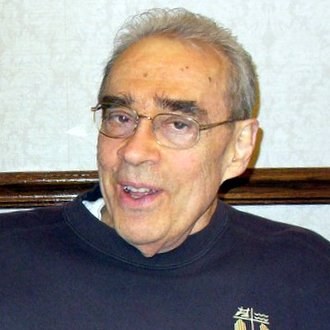 Tony’s diet was sacrosanct, John said. “He ate the same breakfast and lunch every day: oatmeal, raisins, peanuts and blueberries. I told him I was going to outlive him” just to prove him wrong.

“He had definite artistic abilities” in his drawing and in his writing. “When he prepared a homily there was a poetic flow to it all. He had a very creative, artistic mind – but not always a lot of common sense. There are countless memories, and they live on.”

Working in parish ministry and hospital chaplaincy, “Tony touched countless people’s lives” through “some of his personal qualities of goodness and decency,” John said. Selfless and generous, “He had a deep feeling of compassion about people. He had not a mean bone in his body when he dealt with people. His innocence and simplicity, those all live on in the lives he touched.” Because of his deep faith in Jesus, “Tony lives on.”

In the end, Michelle said, Tony passed away in his own bed in his own room, surrounded by “people who loved him and prayed for him. It was a wonderful, dignified death” – a homecoming in every way.

Finding the man behind the myths

Finding our way to forgiveness