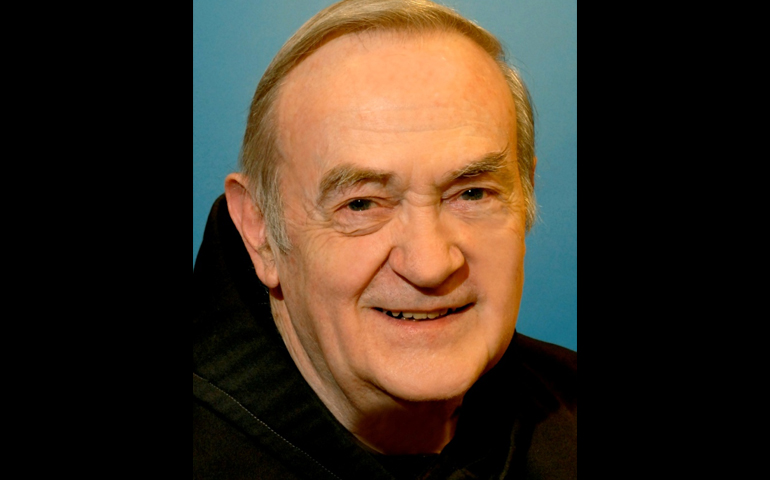 He made the night a little brighter

(Our brother, Br. Martin Humphreys, OFM, died Friday, November 20 at his home, the St. John the Baptist friary. He was 94 years old and the senior of the province by age.)

Br. Gene Mayer did not mince words describing Br. Martin Humphreys: “He was a kind, gentle man who could be very stubborn.” 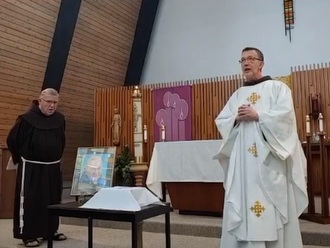 Friars Gene Mayer and Mark Soehner at the funeral

This was the epitaph that began Marty’s Dec. 3 funeral in St. Joseph Chapel at St. John the Baptist Friary in Sharonville, where he had lived in retirement since 2004. As a longtime fellow resident of SJB Friary, Gene should know. The words “kind” and “gentle” were echoed by most who attended the private funeral, kept small over concerns about Covid-19 and livestreamed on Facebook.

Homilist Mark Soehner likened Marty to the subject of “The Lamplighter,” a 19th century Scottish poem. In it, an oldtimer making his nightly rounds in the town is remembered by writer Robert Louis Stevenson as “the man who punches holes in the darkness.” It aptly describes Marty, who responded to the world’s inequities with acts of compassion and boldly creative artwork.

More than 50 years ago, in his days as a porter at Duns Scotus College in Southfield, Mich., he went out of his way to bolster the spirits of those who came to the door, even giving them rides to Mass. When 12 families in hardship were referred to Marty, he and Francis Williams gathered food and clothing to create an outreach program that has endured to this day and is now housed at Transfiguration Parish. 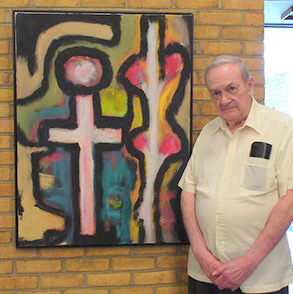 Marty’s concern for humanity was also reflected in his abstract paintings. He was prolific and accomplished, with works ranging from exuberant and colorful to turbulent and dark, depending upon the way he saw the world that day. “It was often obscure to many of us,” Gene admitted in opening remarks.

The camera at the funeral was fixed on the altar; lost in livestreaming were the identity of speakers around the chapel and a view of the cantor, Chris Meyer. On a table in front were Marty’s ashes, draped in white, next to a framed photo of him with that familiar eye-crinkling smile.

Brothers at SJB Friary lent their voices, with Brian Maloney reading from Daniel (“Those who have insight will shine like the glow of the expanse of heaven, and those who lead the many to righteousness, like the stars forever and ever”), and Gabriel Balassone sharing the Prayers of Petition.

“I’d like to suggest to you that Br. Martin was that kind of man,” Mark said, recalling Marty’s ministry as a cook and a porter, a job he did for 29 years. “During that time he helped people.” That simple, sweeping statement summed up Marty’s efforts to welcome folks at the door, offer counsel or consolation for their problem, and then do something about it.

Mark remembered when he first arrived at Duns Scotus College with his parents. “Marty went out of his way to make sure I knew which entrance at that huge place to pull up to, and then called someone to make sure they were there to welcome me.” He always noticed the candidate “who somehow didn’t fit in at first,” just as he noticed “many people who were in desperate need.” From those observations and in partnership with Francis Williams and laywomen grew the Poverty Program. “They would collect gently used clothing, as well as foodstuffs and distribute it to the many men and women in Detroit who came by after losing a job, or were stuck in a vicious cycle of poverty.”

Mark recalled the judgment passage from the Gospel reading, the “separation between sheep and goats at the end of things,” with the only criterion being “works of mercy”. Just as Jesus identified with “those who are hungry, thirsty, a stranger, naked, ill or in prison,” so did Marty.

When people asked Mother Teresa why she loved the poor, said Mark, “she liked to grasp their hand, slowly wiggle one finger at a time and explain, “You-did-it-to-me,” referring to the “least of my brothers and sisters” passage in Matthew. “She wasn’t doing something for people; she was doing it for someone: the poor and humble Jesus. And when you were with Br. Martin, you could feel those eyes of his twinkle with value for you.”

Later on, Marty channeled that passion and compassion into his paintings. “That became his life in the second half of life, teaching of our faith and painting out of the well of his deep connection with God.” It was an expression of “what he knew with God.”

Humble and kind, Marty was among those who “live lives of grace…. They shine like the stars in the deep night,” Mark said, much like that lamplighter, “the man who punches holes in the darkness.”

Mark invited those watching to “let any suffering be transformed” by the love of Jesus. “Help me to notice and love people who seem a bit lost. Jesus punches holes in the darkness of our lives. As we celebrate Br. Martin’s life and his new life with Christ, can you and I rise and do that for others?”

After the last strains of the closing hymn, “O God Beyond All Praising”, Gene blew out the candle, and the chapel emptied. The livestream camera was still trained to the front, where the framed photo of Marty sat, light from above reflecting the image of stained glass on his face. It somehow seemed appropriate. 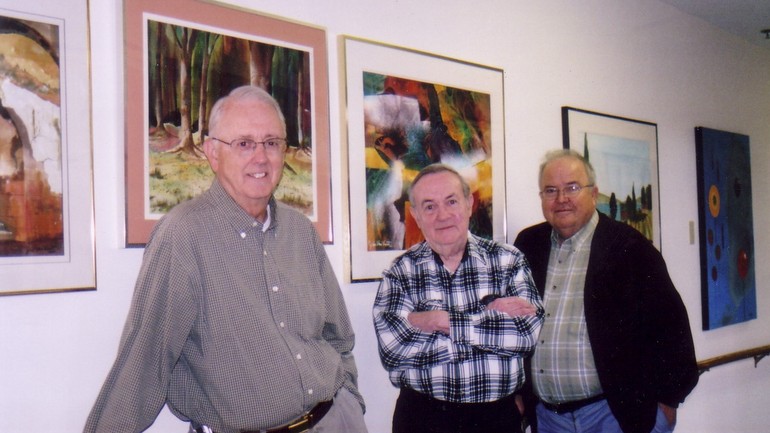