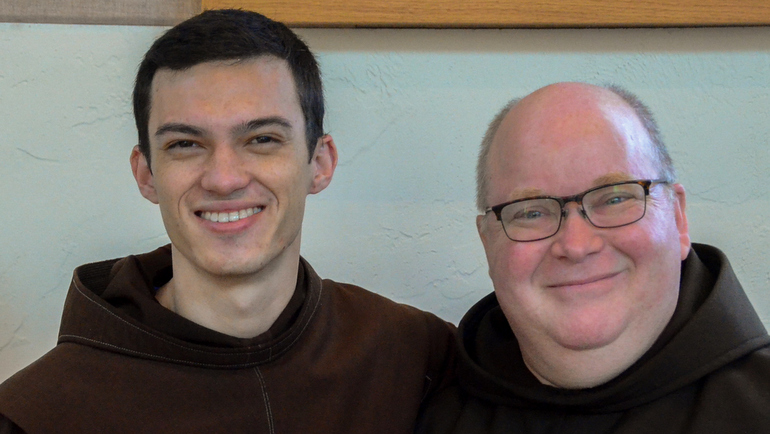 John and Eric make the promise of a lifetime

Nothing beats being there in person.

But for those who could not attend the Dec. 5 solemn professions of Eric Seguin and John Boissy at St. Clement Church in Cincinnati, watching it on Facebook was almost as good. 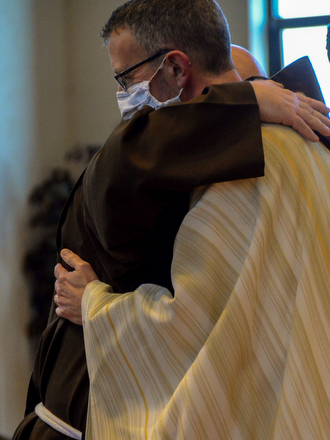 As the procession began and 60-or-so relatives, friars and friends at the church sang Here I Am, Lord, livestream watchers responded with best wishes that scrolled up, one after another, on the right side of their screens:

Far from being distracting, it captured the essence of the profession, as viewers responded on the spot to the beauty of the ritual, the gravity of the moment, the emotion it conveyed.

Getting to this day was not easy. Because of Covid-19, the event had been scheduled, rescheduled, downsized. “We really wanted to do this together,” John said of their commitment to a combined ceremony. Working with Master of Ceremonies Dan Anderson, “We had to bring the number of people down to where everybody would be safe,” Eric said. “We had to live in what we’re living through,” a time in which gatherings are discouraged.

In the end, the pandemic did not diminish the size of the audience. Livestream opened it up to a wide world of viewers, like the Franciscans of Ireland, who posted: “Many blessings, brothers, from the friars of the Northern European Novitiate, Killarney.” Eric’s French-speaking family and friends watching in his native Canada weighed in. “It was a godsend to have it livestreamed,” he said, since his mother and other relatives were unable to travel to the States. 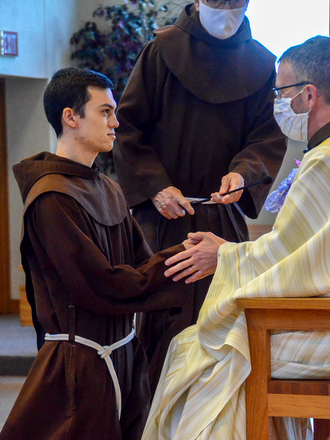 Presider and homilist Mark Soehner was jubilant that the long-awaited moment had finally arrived. “This morning we’re obviously thrilled to be here, and we’re grateful for your presence as well,” he said. “Welcome to this great experience.”

Witnessing for John were his parents, Ying Boissy and Raymond Boissy, with whom he had spent the previous evening, “just having dinner and chatting to relax a little and enjoy their company,” he said. “There were a lot of nerves.” An aunt, Ling Ling Beerman, came from Houston to support John and give the first reading.

Eric had started the day with a 6 a.m. Mass via Zoom, celebrated by a newly ordained friend in Saskatchewan. At the profession he sat with Charly and Susan Dowlatkhah from Transfiguration Parish in Southfield, Mich., where Eric ministers. Former friar Jonathan Beer, who was with Eric in formation, was there to do a reading. And having classmate Jay Woods serve as Deacon for the profession “made it even more special,” Eric said.

It was Deacon Jay who read the pivotal Sea of Galilee Gospel passage from Matthew in which the disciples cast aside their nets to follow Jesus. The Rite of Profession began with Mark addressing John and Eric: “Brothers, what do you ask of God and his Holy Church?”

They asked to be admitted “to perpetual profession in the Order of Friars Minor,” unaware that they were already being congratulated on Facebook as the comment, “So proud of you. We love you,” popped up on the livestream screens of those watching remotely. 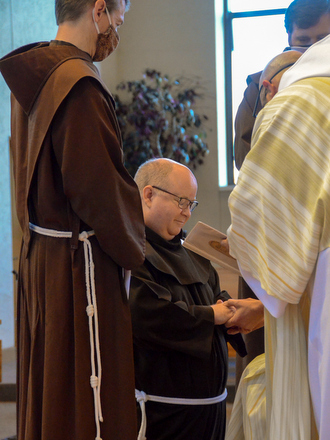 The “fishers of people” passage was central to Mark’s homily. “We’re here to witness something that’s about to happen, but has already happened in their hearts,” he said, likening the spiritual journey of John and Eric to that of the disciples. Just as “the four fishermen discovered the kingdom of God begins by jumping ship,” Eric and John left the security of their careers to follow Christ.

“All of us, everyone, is called to ‘jump ship’,” Mark said, “to abandon whatever nets tie us up” or “whatever tangle we’re enmeshed in.” For the brotherhood of friars, “The real struggle for us is not diminishment of membership. It’s diminishment of a committed adventure,” as strong hearts become “flabby”. What God is seeking is “a few good instruments.” And as the opening hymn had asked, “Who will bear my light to them? Whom shall I send?”

Soon, Mark said of John and Eric, “They will lie down on the floor and let go of their boats and nets in a permanent kind of way. Each will give themselves to God through this crazy little fraternity.” God casts a wide net as he “looks for ordinary people to be instruments. We’re not ordinary people to be passive observers,” Mark reminded those watching at St. Clement and online. “‘Here I am, Lord.’ Let’s all say that. We want to be your instruments. We have all been happily caught.”

When John and Eric moved to the center of the aisle, the ritual heart of the profession began with Mark’s Interrogation, responses to the series of “Do you wish” and “Are you willing” questions. The Litany of the Saints was described in the program as, “Eric & John prostrate themselves.” For John, it was “one of the most impactful things, asking the saints to come and pray for us.” 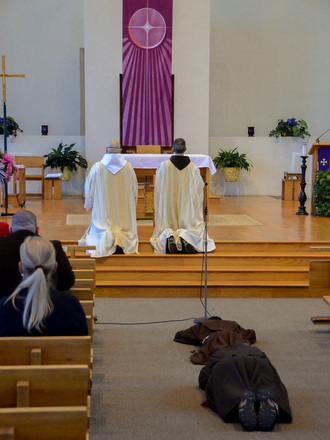 Br. John Boissy called the Litany of the Saints “one of the most impactful things”.

Weeks before, Eric had made a special request. “I asked to do my vows in French to honor my dad,” who passed away this year. Mark not only agreed, “He said he wanted to learn the response in French,” according to Eric. “He was practicing for a month and a half,” and on the day solemn vows were professed, “He nailed it.”

Then it was John’s turn, as he promised “to live all the days of my life in obedience. I give myself to this fraternity with all my heart.”

Following a Solemn Blessing, Eric and John were acknowledged with applause – but, because of pandemic precautions, without the traditional hugs from their friar brothers. “It is my privilege to embrace them in the name of the fraternity, as they usually would,” Mark said. But there were virtual hugs from the Facebook audience, with comments popping up on the livestream screen:

“Congratulations, John!”
“God bless you, Brother Eric!”
“John and Eric, you are in my prayers today and always.”

During the ensuing Mass, there were other reminders of Covid-19, as communion was distributed to guests in the pews, and waves replaced the handshake of peace.

When Mark gave his farewell – before boxed lunches to go were distributed – he singled out the participants, the attendees, Dan Anderson for orchestrating the event and Chris Meyer for a well-executed livestream. “Thank you especially to the families who have brought us these two men,” Mark said. “Eric’s dad, who died earlier this year, is with us.” 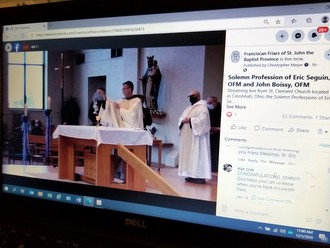 Those who were watching remotely expressed their reactions on Facebook:

Asked to describe the day, ‘The word that keeps coming to mind is ‘committed,’” John said.

For Eric, “I guess the word that stuck in my mind was ‘grateful’, thankful for everybody who was there,” in person or virtually.

By the time it ended, 90 livestream viewers had expressed online the joy they shared with two newly professed friars. “What journeys!” one Facebook watcher commented. “And they are just beginning!”

Watch live streamed video of Eric and John’s Solemn Profession below or on Facebook and read the many comments.