In our memories, forever young

It has grieved me so that, because of Covid, I could not travel home for Jack Wintz’s funeral. But at the same time, I’m grateful that I can share these memories in our newsletter. 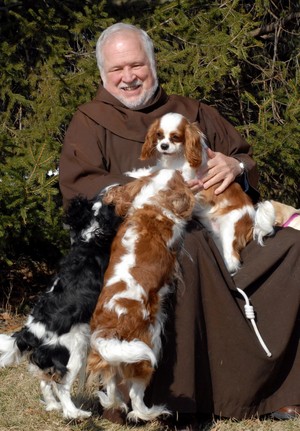 Jack Wintz was so proud of his book, Will I See My Dog in Heaven?, that when I heard he had gone to heaven, I had the image of a host of happy dogs running to greet him, jumping on him, and knocking him down. Such was Jack, such are my memories of him, a boy at heart.

Ronnie Wintz was in the class ahead of me from the minor seminary till we were ordained. But it wasn’t until our final years of formation at St. Leonard’s College that we became fast friends. After ordination we both became English teachers and got our Master’s Degrees from Xavier University on the same day. The bond that had a lot to do with our friendship was that we both were would-be writers and had the same sense of humor and loved making up stories. When we were studying at St. Leonard’s we wrote articles as a team and even came up with a pen name for a couple of articles we were trying to get into the Reader’s Digest. Jack’s name in the Order was Alton at that time, so we became Alton N. Murray, an author who never had an article accepted.

In 1979 I was transferred to Pleasant Street Friary from Duns Scotus College which at that time was in the process of closing as a college. Jack was already living at Pleasant Street Friary in Over-the-Rhine, having returned a couple of years before from a three-year stint of teaching in the Philippines. We lived together in that fraternity till he entered St. Margaret Hall Nursing Home. In all those years and during our whole time in the clericate, I never heard Jack say an unkind word about anyone. And that wasn’t because he was a naturally reticent and very private person, but because he was good. And he was good because God is good. We were one another’s confessor, and one thing Jack never tired of telling me was that God is good and beautiful, and I am God’s creation, good and beautiful because of the One who loves me and delights in me. Jack’s whole spirituality was a response to God’s love for him, and God’s love was a sweetness that brought Jack joy and gave him a joyful vision of himself and others. And that is why he loved St. Francis, whom he saw as someone who took delight in God and in all God’s creatures.

Fr. Jack in 1978: Writing was “much more his world than teaching was”.

Joy brings thanksgiving and lessens being overly serious about life. Joy is a perspective, a way of delighting in the funny things we do and say, a way of laughing at our human foibles and contradictions. This joy was behind the things Jack and I found funny and why so many of our talks were light and why we loved making up stories. With Rocky Reichel we would make up and record stories on the old reel-to-reel tape recorders at Duns Scotus and St. Leonard’s to “roast” our professors on their feast days. One that comes to mind, as an example, was for Fr. Cletus Suttmann, our biology and chemistry teacher at Duns Scotus. It was entitled, “Slete Cuttmann and His Horse Blood Clot,” which included recorded music to accompany Blood Clot’s clopping along during the story.

We also loved pretending we were someone other and playing off each other in those roles. One that we kept going, until Jack’s memory began to fail, was the story of Scott and Ernie. He was F. Scott Fitzgerald and I was Ernest Hemingway, and we had great and funny conversations in those roles – well, funny to us; anyone else would probably think them goofy and certainly corny. All the same, these are some of my fondest memories, role-playing Scott and Ernie and the times we’d be in a restaurant and Jack would get that twinkle in his eyes, and we’d begin pretending to be screen actors and talking loud enough for the people at the next table to start leaning in, trying to figure out who we were and why Julia Roberts or Meryl Streep were difficult to work with or were always late on the set. 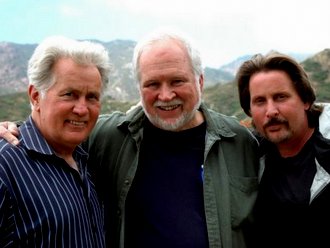 The more serious Jack is ever in my memory as a kind and gentle man who seemed always absorbed in his own thoughts. We would be talking, and I’d notice him zoning off into some other world he was preoccupied with. He was like that most of his adult years, so that when he started gradually forgetting things more noticeably, I thought at first that his behavior was just Jack being more absent minded than ever and even more quiet. When we celebrated Jack’s retirement from St. Anthony Messenger in a room in the restaurant now called “Le Boeuf” in Walnut Hills, he stood up at the end and gave a spontaneous, really wonderful talk that surprised me because Jack always had to have everything he was going to say written out carefully ahead of time, especially when he was getting more and more forgetful. I was stunned by how delightfully spontaneous his talk was and told him so on the way home in the car, which made him smile and say, “Yes! I was downright loquacious, wasn’t I?” 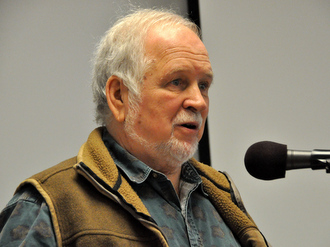 Fr. Jack’s retirement from St. Anthony Messenger: He could be “downright loquacious”.

And well he should have been because he loved St Anthony Messenger. It was much more his world than teaching was. He loved writing articles and was always working on some new angle or thinking about how he was going to “schmeichel” another celebrity into being interviewed by the magazine. And he was very good at interviewing and making the interview come to life on the page. I remember once having to interview someone and asked Jack for some tips. He wrote out 10 points which were lost a couple of years ago in Milan, Italy, when my suitcase was stolen in the train station. How I wish I had them! They were so Jack. I was looking for something profound, but instead the first two were these: 1. Go into the room early and check all the outlets to be sure they work and you can plug in your recorder. 2. Make sure you have a long enough cord to go between the interviewee and the outlet. I’ve forgotten the points in between, but I do remember the last point which has proven very helpful in the interview I was doing then and for many interviews afterward: 10.“Is there anything I haven’t asked you about that you’d like to add?” That question has proven invaluable, provided I remembered to plug in the recorder. 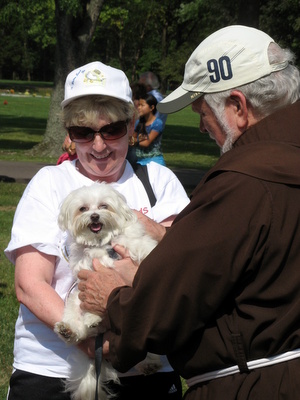 Jack worked diligently on anything he ever wrote for St. Anthony Messenger, for Catholic Update which he helped found and worked as editor of, and for his online, “Friar Jack’s E-spirations.” He loved words, he loved people’s stories. And when his own memory was beginning to fail him at St. Margaret Hall, he would read his own story in his memoir, Lights, whose title he changed to Lights Along My Path, when it was re-published by Tau Publishing. He read that book over and over again, trying to hold on to his story, his own identity. And that book is very much who Jack Wintz was, what he saw in life and how he saw it.

As hard as it is to say, Jack’s deepest fear came true, and little by little at St. Margaret Hall the Jack I knew for so many years began to disappear into an unnerving silence as he struggled to remember or to figure out where he was, though, mercifully, he always remembered me and St. Anthony and Pompilio’s in Covington, Ky., his favorite restaurant.

A couple of years ago I took Jack to Batesville, so he could see his parents’ and relatives’ graves and visit old sites that meant so much to him. The memories flooded in, and he seemed his younger self again for the few hours we spent at the cemetery, and at the park where he played baseball as a boy, and the golf course where he caddied. He even began to laugh and tell me stories as he remembered his boyhood chums and the nicknames they had for each other, names like “Possum” and “Squirrelly” and “Moose.” And in recent years when I would take him out once a week to Pompilio’s, if he was silent, which was often the case, I would at some point find a way to mention these nicknames, and he would smile and sometimes even break the silence and briefly tell me something funny about them that I’d not heard before. 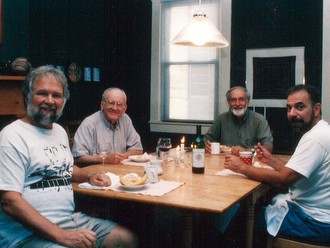 He would come to new life just remembering, and it seemed we were both young guys again, pretending we were movie stars or directors or sport figures and giving ourselves names, playing the roles again. In fact, that sort of summoning up of the past and seeing it vividly happened every time in recent years that I drove him to Batesville for his brother Gary’s annual travel talk at the Batesville Library. Jack would suddenly and surprisingly begin to remember things and people that even Gary had forgotten. It was like Batesville held a magical grace for him as often happens with our hometowns.

Remembering. How precious that gift is! There is a quote from St. John Chrysostom that Larry Landini once sent me in a letter. It consoles me now as I remember Jack and grieve; and I hope it will console his two remaining siblings, Gary and Tese, and his other relatives, and all his confreres and friends who knew and remember Jack fondly. St. John says, “The dead are no longer where they were; now they are everywhere we are.” I feel Jack’s presence now. I remember. I carry him with me. 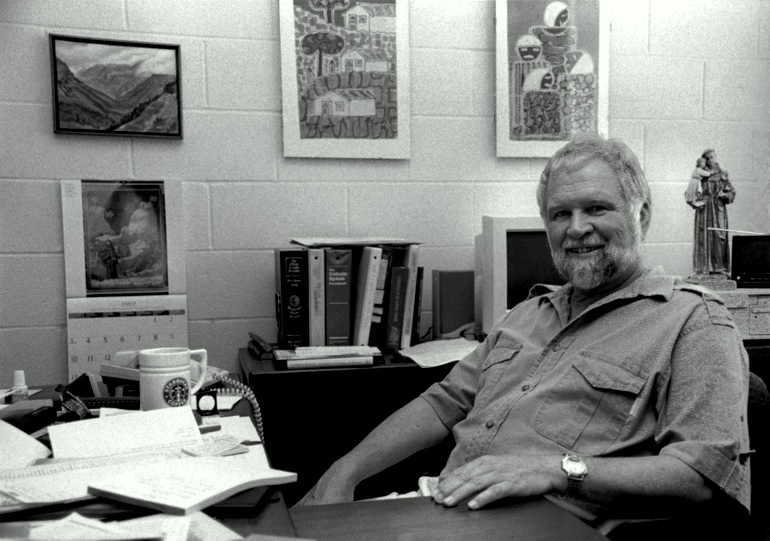 Fr. Jack in his office at St. Anthony Messenger.

The journey to the mountain top

Our Journey through Lent video series