Embracing what unites us 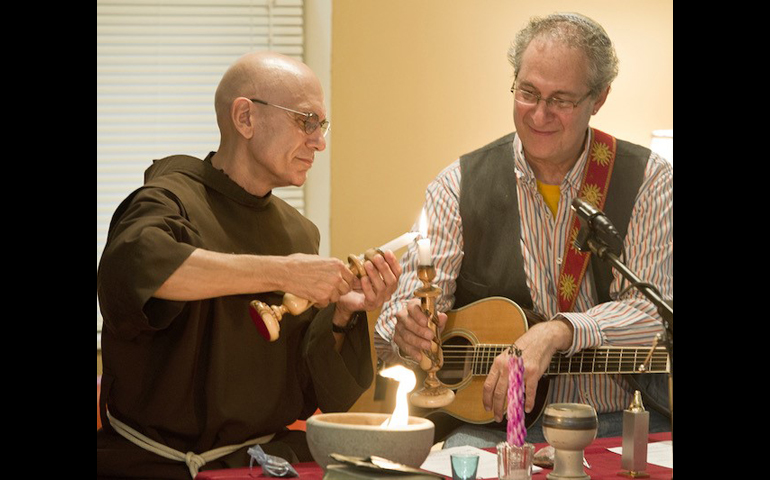 Al Mascia and Steve Klaper turned their passion for religion into interfaith ministry.

As Easter and Passover intersect, two kindred spirits talk about each other’s faith 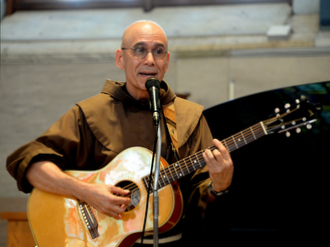 My earliest memories of Judaism are deeply personal ones. It was a family of New York Jews who took my great-grandmother and all of her children in after she lost my great-grandfather in a construction accident. With nothing but some furniture, a piano and facing eviction, the mother of five was given an apartment free of charge by this Jewish family who managed their own apartment building on the Grand Concourse in the Bronx.

Growing up I remember listening to stories my grandmother would tell me about how she would run up and down the stairs of this apartment building, turning things on and off on the Sabbath for the Jewish families living there. “I was a Shabbos Goy,” she’d tell me with a smile and not a little pride. And so, my exposure to Yiddish began! 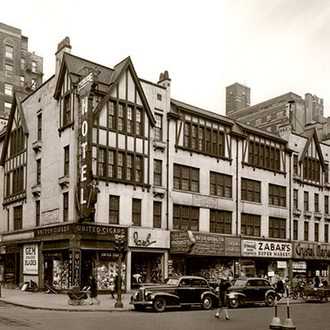 Over the years my family’s relationships with other Jewish people would continue and deepen. My father learned the deli business by working at the landmark Jewish delicatessen, Zabar’s, the one featured in Woody Allen’s film Manhattan and in the Tom Hanks movie You’ve Got Mail. My great-uncle and namesake would marry a Jewish woman; my mother would mail out as many Jewish holiday cards as Christian ones, and my father regularly peppered our family conversations with the Yiddish he’d picked up from his largely Jewish coworkers. Simply put, while growing up I experienced Judaism not so much as a religion apart from mine but more as just another aspect of my overall world view and what I understood to be an important part of the lives of people who had become like family.

My seminary studies helped me better understand Jesus as a Jew, inseparable from the Jewish culture of his time. I was struck by his careful engagement with Torah, his time spent in synagogues and the passion with which he defended the Temple from defilement. I came to comprehend the disagreements, arguments and even harsh language Jesus took part in with certain religious leaders more akin to a family argument where estrangement was never the primary intent, only clarification. But it was my studying of Hebrew and eventual ability to translate some of Sacred Scripture that proved to be a turning point for me. I felt as if I had cracked a code of sorts and was now able to interact with these familiar stories only now in a much more dynamic and potent way. 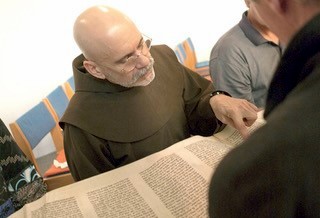 Founding the Song and Spirit Institute for Peace 10 years ago with my friends and colleagues Hazzan Steve Klaper and his wife Mary Gilhuly was another major turning point for me. Living in the Midwest I had always missed the Jewishness of my New York roots. Suddenly, and largely thanks to them, I now had Jewish friends again who actually delighted in my ability to interject a little Yiddish here and there in our conversations!

Over the years I’ve attended countless Sabbath and Havdallah services, been exposed to Jewish thought, theology and mysticism and marveled at how much spirituality and liturgical practices our respective faiths share in common. To say that all of this has made me a better Catholic and Franciscan would indeed be an understatement. Such intimate exposure to the religious milieu of the Lord, albeit thousands of years later, has granted me a kind of insight I otherwise would never have had.

While I hesitate to call it covetousness or envy, there are things about Judaism I wish we as Catholics were in possession of. In fact, three things in particular. The first of these is the practice of midrash. Midrash is something that pre-dated Jesus and is about the ability to interpret and engage with Sacred Scripture in a lively, sometimes even argumentative way. Biblical contradictions, apparent inconsistencies and possible meanings of some mysteries are debated back and forth without fear of offending anyone or in any way diminishing the sacredness of the text. I wish we as Catholic Christians were more comfortable with such liveliness and debate in our Bible Studies. 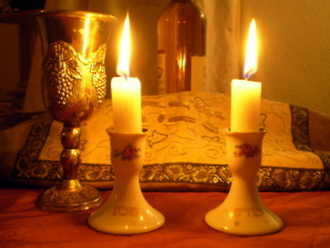 The home is a central place of Jewish worship.

The home for Jewish households plays a central role in their religious life. A mezuzah placed at the entry way of a Jewish dwelling is just one symbol declaring that this is a holy place. It is also where certain ritual actions take place to sanctify the Sabbath and other holy days. While the synagogue exists for many important purposes, it is never there to eclipse the home as a central place of Jewish worship. While we refer to Christian households as the Domestic Church and parents as their children’s primary catechists, our understanding of such things has a long way to go by Jewish standards!

And, finally, there’s the Sabbath. I’ve learned that Jews not only take this day and its practices quite seriously and to heart, but they actually look forward to it, delight in it and celebrate it as a true gift from God! When I think of how difficult and challenging it can sometimes be to catechize a similar appreciation of the Lord’s Day, all I can say is, Oy! 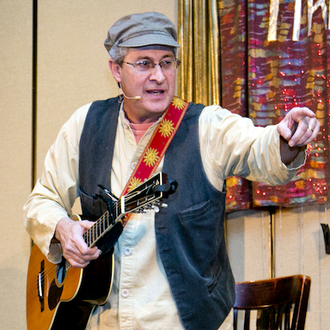 I once heard a lecture by an orthodox rabbi, wherein he said, “Although our people have suffered terribly at the hands of the Church, I thank God for Christianity. The world needed to be civilized; God’s unity needed to be proclaimed, and we Jews were simply never going to do it.” I remember being surprised by this statement. Not that I didn’t see the truth in it — just that an orthodox rabbi would allow himself to say such a thing in public.

I grew up in an orthodox Jewish community in Detroit in the 1950s and ‘60s, spent much of my youth in shul (synagogue) with my father, and went through 10 years of religious school. While I did not grow up with stories of the Holocaust and warnings of antisemitism, the community’s general view of Christianity was that it was a religion for children. It was a silly, fluff-of-a-faith tradition whose adherents were not well-educated (they didn’t study the Bible, or any other religious texts), and were interested in nothing deeper than “Jesus loves me.”

Once I walked away from most Jewish observance as a young hippie, I came to recognize the inherent bigotry of those views. I met many well-informed, thoughtful Christians; our differences came to mean less and less to me. I read Thomas Merton; I learned to appreciate the Christian foundations of social activism. Still, for the most part, I thought of Christianity itself as lacking any historical arc — it seemed focused mostly on personal salvation. 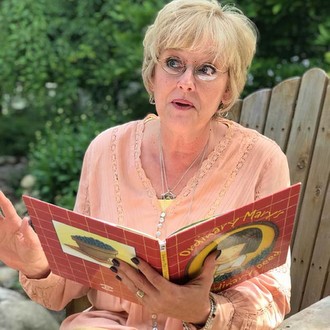 And then I met and married my Irish Catholic wife, Mary Gilhuly, and got to know her family. Her parents — Secular Franciscans — were lifelong learners, eager to engage in spirited discussions of religious text, history, ethics, morality. During one conversation with my father-in-law, where we simply could not reconcile our respective viewpoints, Tom smiled and said, “Look, you’re a son of the Covenant — a bar mitzvah — and I’m a son of the New Covenant. Our paths really run side by side in the same direction.” What a pleasant surprise. And it was not just my wife’s family — I came to realize there were lots of people deeply engaged and educated in their Christian faith.

What really grabbed my attention though, and has led to deep, ongoing, personal exploration and study is the life and teachings of that most famous of all Jewish teachers, Jesus. The Church that grew out of these teachings is of less interest to me as a teacher of Torah than is the man and his unique viewpoint, his innovations in Jewish prayer and ritual. I actually teach a class on The Jewish Wisdom of Jesus, which routinely draws an equal number of Jews and Christians. The fascination has only deepened by my relationship with Br. Al Mascia, OFM (far more educated than I), teaching and presenting together through Song and Spirit for the past 10 years. 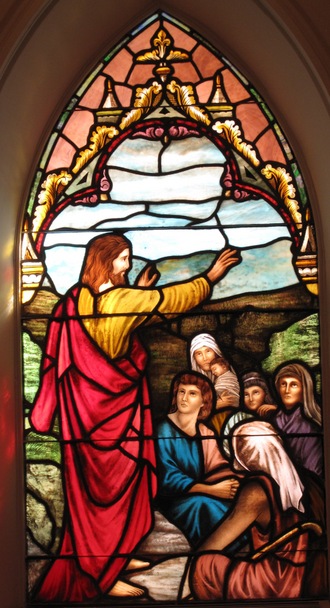 What led to ongoing study was the life and teachings of the most famous Jewish teacher, Jesus.

But none of this could have happened without my wife and her family. It was, in large measure, Mary’s influence that led to my study and eventual ordination as a chazzan (cantor) and maggid (spiritual storyteller/preacher) through the Jewish Renewal movement. My rabbi, Reb Zalman Schachter-Shalomi (a good friend of Merton, Fr. Thomas Keating and the Dalai Lama), would point out that “you can’t get all your vitamins from one bottle.” Every tradition has its own unique spiritual technology, and, whether we know it or not, we’re all working together to continually recharge what Reb Zalman called “the God field.” Christianity has spiritual techniques that it is simply better at activating. As does Judaism, Islam, Buddhism, etc. Dipping into other traditions can yield an understanding that you might never find in your own. Thus, deep ecumenism makes for a richer personal outlook and a healthier planet.

One final, very timely example of how Mary and I have learned to honor our side-by-side traditions: Right before Passover, every observant Jewish householder collects a small pile of chametz (crumbs) signifying the leavened food products they have purged from their homes in preparation for the week of Passover. These are burned in the morning with a blessing. The need to observe this ritual coincides with Mary going to church on Palm Sunday to get her new palm frond. And so, every year, I wake up very early on the morning before the first seder, go out on the back porch and –– in accordance with both Talmudic and Canon law –– dutifully burn my chametz wrapped in last year’s palm frond. I have yet to hear of any other family that embraces both these customs at once. But the fragrance rises to heaven nonetheless. Felice Pasqua. A Happy Passover and a Blessed Easter.

For the past decade, Al Mascia and Steve Klaper have been finding and forging connections through faith. Their work as musicians initially brought them together, and a desire to encourage tolerance and understanding led them, together with Steve’s wife, Mary Gilhuly, to create the Song and Spirit Institute for Peace in Detroit. This year Song and Spirit marks 10 years of serving, inspiring, and entertaining the community through music, art, education and outreach to the poor. As part of the celebration, we’re planning to bring you a retreat with Song and Spirit in May featuring video highlights from their programs and presentations. Watch for news and updates on our Facebook pages:
https://www.facebook.com/Franciscanfriars and https://www.facebook.com/PeaceSalaamShalom

And learn more about Song and Spirit’s mission at: https://songandspirit.org/ 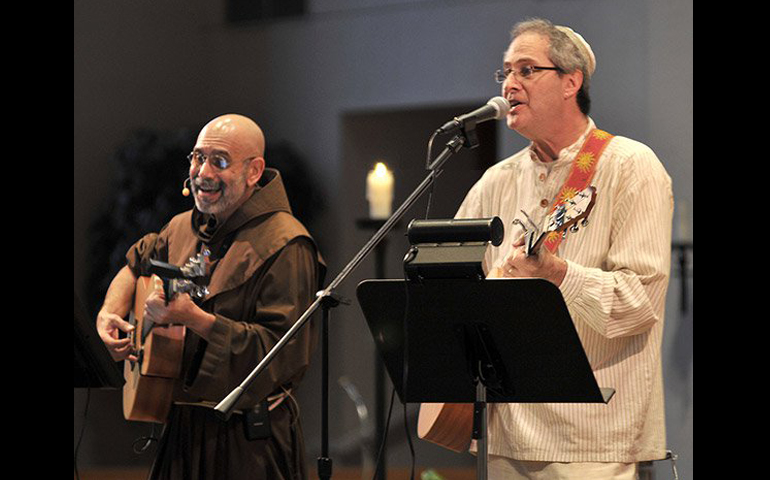 Meditate on the Stations