Logo is a gift, a blessing

Friars Club is about to receive an unexpected and very welcome gift. 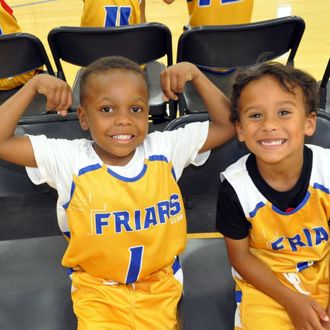 It’s a logo that will be emblazoned on T-shirts, posters and pamphlets, shared via social media and copied on letters to donors. Six college students are pooling their talents to promote Friars’ signature program: Ron Walker Youth Sports. To do this they’re creating a symbol for Friars Club that says to the world: “Here’s what we do and who we are.” And it will cost the organization absolutely nothing.

To students in the Brand Identity Design course at Mount St. Joseph University in Cincinnati, this kind of assignment is nothing new. For seven years, instructor Kurt Grannan has made it a class project for juniors whose work will benefit a worthy organization. “Being a Catholic university” founded by the Sisters of Charity, “We try to keep in mind the common good,” says Kurt.

This year’s beneficiary is Friars Club, which, like so many non-profits, was severely impacted by Covid closings and restrictions. Promotion and messaging are crucial as kids return for basketball, volleyball and baseball programs and to the Jeanne and Jake Sweeney Learning Center for afterschool assistance. 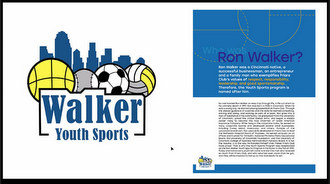 Typically, MSJ students collaborate in the classroom, brainstorming, supporting, and advising each other. This semester, while they were separated by Covid and parked before screens for Zoom sessions, spontaneity suffered. “We are three-dimensional beings,” says student Cameron Weitz. “Education has become very flat.” And as fellow student Emma Paff says, “There’s been almost a disconnect.”

On April 27, after weeks of virtual meetings and feedback from Annie Timmons, Executive Director of Friars Club, and Mikayla Chess, Social Media Coordinator, the students are ready to share the final versions of six logos they’ve designed.
Still to be answered: 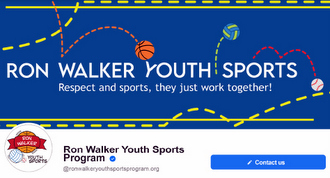 How do you convey the essence of Friars Club?

And how do students work as a team when they’re separated by Covid?

Friars Club knows all about collaboration. For 161 years volunteers have joined forces – coaching, tutoring, scorekeeping, helping at games – to benefit at-risk children. Among life skills that are encouraged through organized sports, education and leadership programs are mutual respect and the ability to function as a team. “It’s how you play the game,” should be engraved on the building.

Likewise, the Brand Identity class is as much about the team and how it functions as the projects that are produced. The goal is “to connect the dots between research and application,” according to instructor Kurt. Otherwise, “These students talk theory but have no idea how to apply it.” 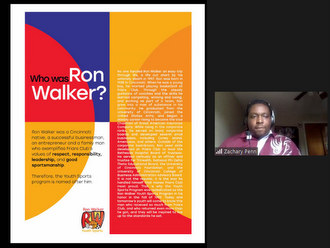 They started with research to find “the meaningful components of the organization, and how it is perceived by the community,” looking at other logos and the prospective audience, zeroing in on “targeted language”. Before this, “I didn’t know anything about Friars Club,” says student Betsy Hernandez. “I thought it was just another club, like LA Fitness or the YMCA.” Cameron had heard of the Franciscan friars who founded and support Friars Club. “When we started the research, we found it was way more than sports,” he says. “It really represented the values the Franciscans had.” Emma discovered “how diverse and welcoming they are.” Friars Club is about “giving kids somewhere to go and something to do,” Bex Wooddell says. Kyle Cole had gone to games there but had no idea who Ron Walker was. Learning that Friars Club was one of many community projects Ron selflessly championed “helped me look at the project in a different way,” says Zachary Penn. 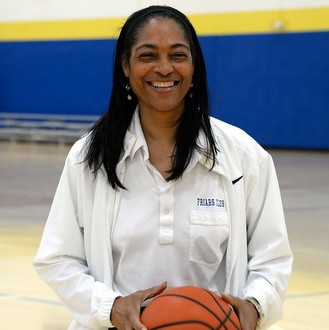 Their next step was compiling descriptive words and terms associated with Friars, such as: “Competition with respect”; “playfulness”; “supportive”; “safe”; “passionate”; “friendly”; “energy”; “courage”; “strength”; “confidence”; “empowerment”; and definitely, “loud”. In the end, Emma says, “We wanted to focus on fun, the value of respect, and multiple sports, using a colorful palette to show energy.”

Today via Zoom they’re showing Annie and Mikayla how the logos they created look in real-life applications like multifold pamphlets and social media headers. Taking turns, students describe the process, never leading with “I”, always using “We”. That’s because “We are a design team,” says Kurt.

The designs are so dynamic, versatile and polished that any of them could represent the Ron Walker Youth Sports program. Choosing one would be hard, Mikayla says, so there may be some mixing and matching. In a class with a variety of skill levels, “Even the ones who are not stellar designers produce great work,” Kurt says of his students. 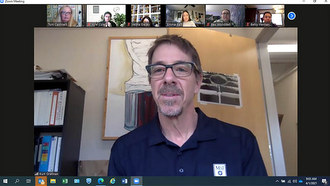 “My immediate response is, Wow!” says Annie, who is not easily overwhelmed. “I’m very impressed, very pleased. They did a great job.” The work is so professional, “You’ve more than prepared them to go out in their field and be creative,” she tells Kurt.

“They all worked so hard and they look so good,” Mikayla says of the students’ logos. “It’s been an extraordinary process, but a huge gift to be able to work with them. It introduced us to a whole new group of people who know about Friars and can tell others about it.”

To students like Cameron, “Friars Club is not just a name anymore.”

Mikayla, now 24, has been a Friars Kid since the second grade. “I’ve been a coach, a tutor, worked concessions, done the scoreboard. I’ve put air in basketballs. I was really excited to get these fresh pairs of eyes looking at Friars Club,” she says. “I was pleasantly surprised how much I learned about the branding process, what people think of us and the audience we have.” Whichever logo they end up choosing, “I’m sure there are a million and one ways to use it.”

And maybe, she says, “It will inspire others to want to be as big a role model as Ron Walker, so they can have a program and a logo named after them.” 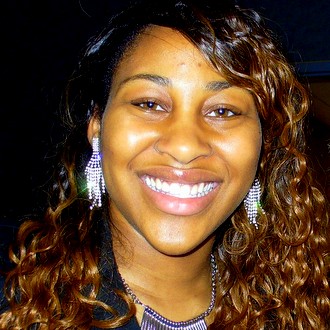 Mikayla Chess has been connected to Friars Club “since I was in the womb and my mom was involved,” she says. “We want Friars Club to be a lifelong organization that stays with you,” says Mikayla, Friars’ Social Media Coordinator. Alumni of the program are one of their greatest assets. “We want you to come back and watch games and volunteer.” Friars Club needs speakers, those willing to share “the story of what Friars Club did for them.” They welcome volunteer coaches, timekeepers, game assistants, concession stand helpers and more. Contact Mikayla; she’ll find a job for you.

Challenge and opportunity for novices