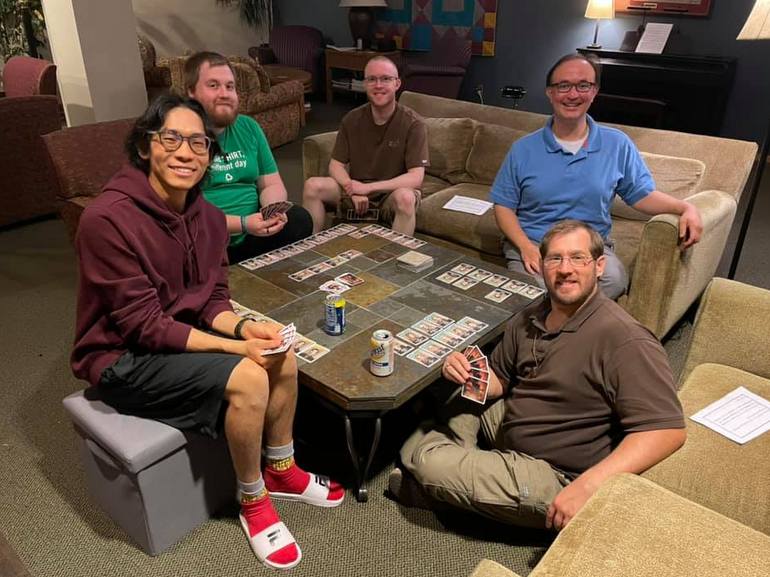 They call themselves the “Game Gang”.

A couple of weeks ago when Fr. Frank Jasper visited the postulants at Holy Name College in Silver Spring, Md., he noticed they had a particular fondness for one recreational activity: board games. For anyone who’s still playing Scrabble, modern board games require a different level of skill and some pretty deep strategizing. “There are over a dozen different games that we played over the course of the postulancy,” says SJB postulant Andrew Harrington, who’ll spend part of his summer at St. Francis Inn in Philadelphia before moving to the novitiate. 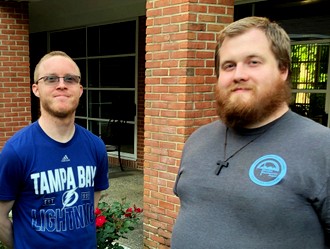 Postulants Will Compton and Andrew Harrington in Silver Spring, Md.

One of the most popular games is Settlers of Catan, or Catan for short, developed in Germany in the 1990s. “In this game, each player is a settler of a new land – Catan – who uses the newfound resources to build and expand their settlements and cities,” Andrew explains. “The board is composed of individual hexagons that are shuffled like cards and placed in a new arrangement for every game. Players are trying to reach a certain number of points before any other player. In the meantime, it behooves players to cooperate by trading resources with one another, so alliances get formed – and broken – throughout the game.”

More than a social pastime, Catan is described by reviewers as “a resource management game, defined by position and strategizing,” with “breathtaking depth and breadth of experience.” As Andrew says, “Games like Catan gave the postulants an excuse to spend time together, particularly during a year of pandemic. The long list of games meant that there were many options for many moods. Some games led to longer conversations, to the point where sometimes those conversations happened without the games.”

In the end, he says, “Games give people, especially strangers who find themselves in a community, a constructed way to recreate with each other and so build the foundations to know one another better.” And besides that, “It’s just fun.”

‘The real gardener is God’