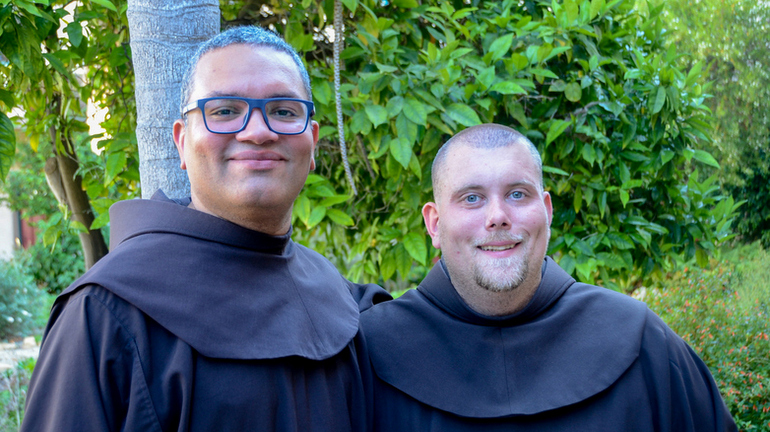 On July 2, eight men from three provinces professed first vows as Franciscan friars at Old Mission Santa Barbara in California. A small gathering in the novitiate chapel at the 18th-century mission included leadership from the three provinces, who formally witnessed vows and received the new friars, as well as other friar-witnesses and faculty. 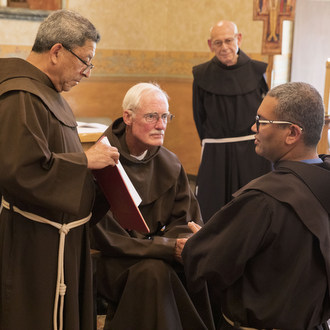 During the Friday afternoon liturgy, Novice Master Jeff Macnab gave advice to the newly professed: “It is the heart that makes this Franciscan journey. Rich, powerful and attractive in a world that is filled with trouble. The heart is what the world needs. The brothers who surround you all make up this one heart that you are joining.”

At the ceremony, the men formally signed a document of their vows, and received the waist-cord of simple rope, wrapped around their plain brown robe. 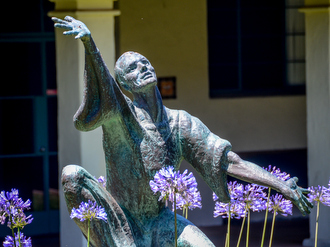 Statue of St. Francis in the Mission courtyard

Brian Menezes of St. John the Baptist Province said, “I feel a part of the larger Franciscan fraternity now.” There was music, preaching, prayer and fellowship at the gathering, but for Brian one moment stands out: “when I knelt before Father Frank and recited the vows.” Those were the vows of poverty, chastity and obedience, of course, but the context of those vows is everything. It is in a circle of friendship, of brotherly love, of support and solidarity that will accompany the friar for life. The small gathering at Old Mission Santa Barbara was symbolic of that.

Tyler Grudi of Holy Name Province said the part of the ceremony where the friars blessed water stood out for him: “All of us novices held our hands over the water and blessed it. This reminded me of why I’m professing vows. We all have already been consecrated at Baptism, and it is our baptismal vows that we are reaffirming. It’s every Christian’s vows that we are affirming — the whole body of Christ.”

Tyler, Brian and the others will spend the coming months in a ministry assignment within the new Brothers Walking Together program. It is a joint program of US-6 provinces in the process of merging, placing friars across provinces. They will go in pairs to work with Franciscans on society’s margins in Jamaica, Philadelphia, and at the US/Mexican border in Arizona.

After that ministry assignment, they will continue their Franciscan formation at the interprovincial post-novitiate formation house at St. Joseph Friary in Chicago’s Hyde Park neighborhood, where friars live in community while pursuing formal studies at Catholic Theological Union and other academic institutions. Friars there also serve in various local ministries. There are currently 17 friars at St. Joseph Friary preparing for lifelong Franciscan ministry.

Watch the ceremony below.

Fr. Mark at the General Chapter: The journey to Rome