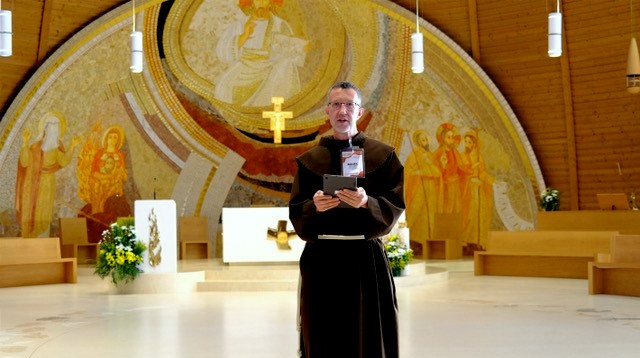 The first week of the General Chapter

July 3: Opening of the Chapter

Breakfast this morning was a time for another stretch of culture. The friar I sat across from was around my age and was the Provincial of France and-French-speaking Belgium. The stretch for me is that I really know only one language – English – while most others speak at least two. Last night Irish Provincial Aidan McGrath pointed out a friar with proficiency in 20 languages! Many easily switch between the three official languages of Italian, Spanish and English. This brother spoke English with me. We are about the same age. We both had some experience with the Enneagram as a tool. I am discovering that there seems an amazing coherence in our formation.

The opening Mass had our Minister General, Michael Perry, presiding. Michael Lenz would have been happy with the incense! At one point it was so thick it was difficult to see the altar. Really beautiful and joyous. We processed into the Chapter Hall singing the Veni Sancte Spiritus and the Litany of the Saints. So many Franciscan saints, martyrs, and blessed! There was a role call and an oath of secrecy.

The best time to get a run in is early in the morning, while it is still cool. Using my phone’s Runkeeper app, I’ve been able to tell that my run three times around the building and down the main entrance is a little more than 3 miles, or 5 km. When I’m able to get that run in, I have a lot more energy throughout the day. Sadly, my back will only handle it every other day.

We began the morning with a spiritual talk by Bishop Felice Accrocca of Benevento, Italy. He encouraged us to be the Friars Minor by having the courage to try bold steps. Do things that the diocesan clergy cannot! He presided at the Sunday Eucharist in the chapel. Later that afternoon we shared our hopes for the Chapter. What evidence, signs, did we hope for that would tell us we had a successful Chapter? These were shared in our language groups. 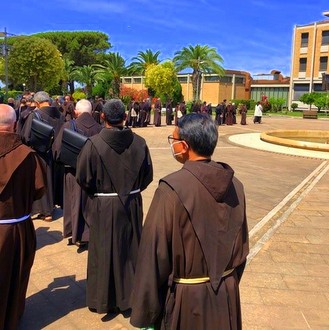 Friars chanting the entire Veni Sancte Spiritus. We walk and sing, then the Litany of the Saints is sung with many, many Franciscan saints included.

In the evening at cena (dinner), the U.S. friars were congratulated on our foundation day. “God bless America!” was the greeting given by the Rector of this seminary. It was heartfelt and received applause. Sadly, there were no fireworks….

We began this day with a prayer service invoking the Holy Spirit. I was able to read from a section of the Regula non Bullata for the capitulars. This day is dedicated to the Minister General’s Report in the large Aula (Hall) of San Lorenzo da Brindisi International College. Michael Perry presented in English. He had a moment of silence for the brothers who have died from Covid-19. He noted that this term was marked by two crises: the Financial Crisis that occurred at the beginning, and the Pandemic this past year. But he noted that both came with Opportunity, not just with Danger.

He reviewed how he and the General Definitorium had fulfilled the Mandates given by the last General Chapter, or at least, moved the needle a bit farther. He spoke about the processes that he had used to animate the Order. Rather than set up a large agenda, he broke the years up into two-year themes that were set out over the six-year period of his time as General. He indicated some challenges that threatened our way of life: a Lack of Prayer and Devotion, Individualism, Existential Loneliness. He suggested changes for initial formation, and some new directions for the Order itself. When faced with the decline in number of friars in the West, he encouraged the brothers to “Choose Life!”, rather than choosing death. Restructuring should always be accompanied by revitalization for an entity. He encouraged friars to try to break down the silos. 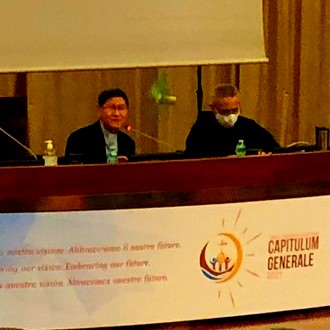 Cardinal Luis Antonio Tagle, Prefect of the Congregation for the Evangelization of Peoples, speaks at Chapter.

After each section of his report, there were opportunities for a “Buzz Session”. It involved talking with two or three friars near you about things that you heard and any questions or comments that you had. These were collected and the General attempted to address them before starting the next session.

Today began with Cardinal Luis Antonio Tagle, Prefect of the Congregation for the Evangelization of Peoples (formerly the Propaganda Fide). He was quite provocative and proudly a fan of Pope Francis’ document Evangelli Gaudium. He hoped that the friars would take the Holy Father’s words seriously about trying new forms of evangelization that felt like Good News. He encouraged us not to fall into the trap of Fake News and misinformation, but to be authentic communicators of the Gospel by speaking plainly in simple, human words. It should come forward from our own relationship with God. You could have heard a pin drop when this man spoke. He was funny, with a twist that led us into consideration of our own witness. He encouraged us to use our witness as brothers committed to the simple life toward a “freshness” in our baptismal vows lived joyfully. “Clericalism impoverishes the Church.” 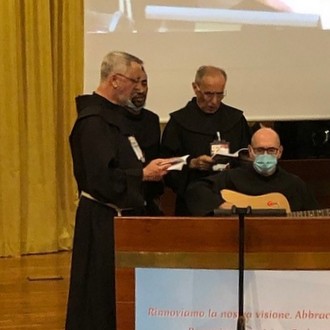 Fr. Caiohmin Ó Laoide (left) is a frequent singer with the Schola.

Each afternoon we heard a Secretariat report. They were always followed with Group Work and Evening Prayer in our language groups. This would then be followed by an 8 p.m. cena (dinner). While this is generally a lighter meal, there was always boisterous conversation in the refectory.

The morning held reports on the Safeguarding of Children. Caoimhín Ó Laoide (ESC General Definitor, well-known to SJB friars) presented. He kept asking us to check in with our inner selves, to notice tension or stress. The presentation went well. He stressed that victims need to be heard and trusted. Some new legislation was presented that would keep us in line with the new mandates coming from the adjustment to Canon Law.

In the afternoon, documents were presented from the General Secretariat for Formation and Studies. They thoroughly reviewed their materials and offered a booklet that shared some of the results from the Continental Congresses on Formation that some of the friars from SJB attended in 2018. They encouraged the role of the Guardian as the prime actor in Ongoing Formation. Two years ago, they published a Handbook on Guardians which was also distributed. 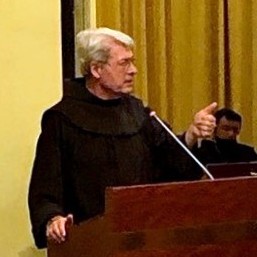 The Economo General, John Puodziunas (my CTU ordination classmate!), presented an entire morning on the financial condition of the Order. He proposed a number of ways to become a Fraternal Economy, one based on the values of the Logic of Gift, Transparency, Accountability, Justice, Simplicity, Work, Sacrifice and Relationship. John reiterated that such an economic structure would insure that the funds would be spent guided by these values and the relationship of fraternity. Outside of that, it left the office possibly as prey to the worse impulses of expediency, which led to the 2014 financial crisis.

Later in the afternoon John presented the actuarial studies (his first love!) that informed the Order of a realistic and probable future. It enabled the Provincials to have the tools to plan appropriately. His talks and work were met with overwhelming applause.

Fr. Mark Soehner, OFM, is the Provincial Minister for the Province of St. John the Baptist. Read about his travels to Chapter at: Fr. Mark at the General Chapter: Journey to Rome

More photos on our Flickr album: Fr. Mark at the General Chapter 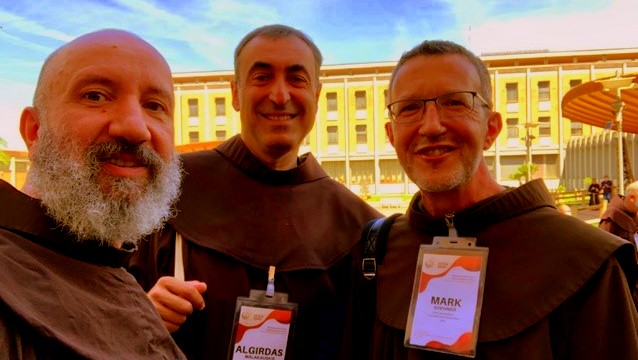 Fr. Mark Soehner, right, hanging out with Algis (Provincial from Lithuania) and Carlo (Brother elected by ESC as capitular) before we entered the Great Hall (Aula).