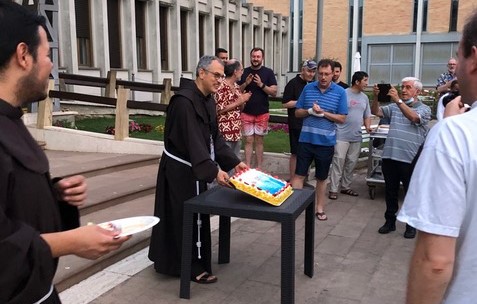 A cake in honor of Minister General Massimo Fusarelli was part of the post-election celebration.

The Second Week of the General Chapter

Proposals were being formulated.  The purpose is to try to keep the Order fresh and responsive to the Signs of the Times.  We have been challenged by many speakers to Wake Up to the new realities that are in our world and Order.

We have had small group meetings by language groups.  In my group there are many friars from Asia/Oceania, two from Western Europe, and two from the ESC.  While all speak in English, for most it is a second or third language.  I am amazed again at the number of languages most friars know outside of the United States.  The proposals came from all the different small groups, including our own, and we then proposed the ones that appealed to us.  It can be a slow process to determine which ones really hold the weight for us and the whole Order, and which ones are more responsive to a particular region.  We finally gathered around a few proposals to send to the Secretary who will again meld the ones that are similar into a final set of proposals.

This Saturday morning had us reviewing all the material from the 12 Provisional Reports, and then trying to form our own proposals.  There was a bit of time for rest in this day.

During the Chapter, various language groups meet together to discuss the overall progress of the Chapter, and to talk about our Candidates.  Today our English Speaking Conference (ESC) met with COTAF.  We all spoke about the potential candidates for General Minister.  We got some new insights into the personalities of the various men being proposed.  Some people shared their preference.  We gathered again in the afternoon, initially for the first Straw Ballot.  There was a hum in the Aula of the capitulars speaking in low voices with various comrades.  Then during the voting, absolute silence.  The ballots read, in Latin, “I nominate Br. __________”.  The votes were gathered by the tellers in sealed cardboard boxes with an opening at the top to insert the ballots.  Each capitular filled out their preference.  Then each vote was read aloud and passed through four different friars, whom I guessed were looking to authenticate that it was indeed the man whose name was just read.  The tallies of the votes were announced.  Then we went out for a break. 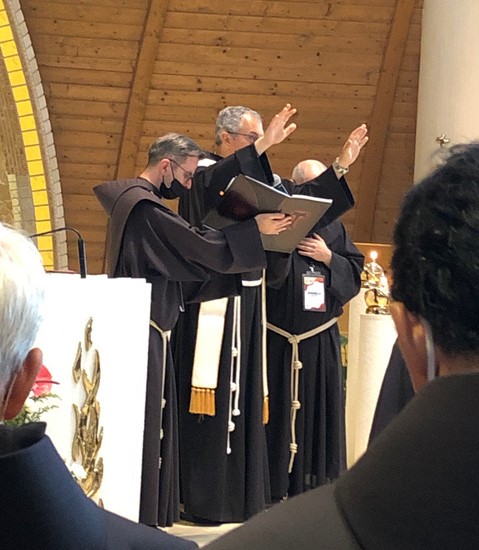 We returned for evening prayer and a very fine exposition by Dan Horan from Holy Name Province on the Gospel for Sunday.  This Gospel of Mark was the Sending of the Disciples out two by two with “nothing for the journey”.  This was, of course, the Gospel reading to which St. Francis responded, “This is what I want; this is what I seek; this is what I long to do with all my heart!”  Dan, who had been listening with us to the Chapter’s earlier proceedings, encouraged us to see this as the key identifier for Francis, leading to our naming as Friars Minor.  If we lose our way in life, in the Order, it is critical to go back to this Gospel again to uncover our identity anew.  Because we are in essence brothers, it is necessary that we treat all people, in fact, all creation, as brothers and sisters.  And when we lose our way with too much individualism or provincialism, we need only to rededicate ourselves to a truly fraternal way:  “the heart of our calling and our greatest gift to the world.”  Then our joint heart will begin beating with enthusiasm.

At cena that evening, Michael Perry introduced a movie producer, a member of the Academy, who developed a film on Pope Francis and his outreach to many people who live on the periphery of life.  These included outreach to the many immigrants, sexually abused people, LGBTQ+ folks, and those whose lives are oppressed by grinding poverty. It contained the Pope’s concern for the environment and the devastating effects of hurricanes and earthquakes that result from climate change.   It traced the development of Pope Francis through his time as a Jesuit Provincial to his episcopacy and eventual election as Bishop of Rome.  This movie went late into the night.

This day was entirely free!  But many things happened of course.  Mostly, I was able to catch up with connections back home.  Time for jogging, lighter walks around the building with some of the Chapter members, reading, etc.  Originally we were to go to Assisi but with the Covid restrictions still in place, we were told to stay on the grounds of San Lorenzo.  It was fine with me….provided even more time for a decent nap!

Today was spent in our language small groups (about 14 friars in my group).  Our task in the morning was to develop Proposals that Chapter would eventually vote upon.  The process has been to work in these smaller groupings to hear the hopes of the others, and to formulate these into Chapter Floor Proposals.  With so many different cultural contexts, it is frustrating and difficult to come to clear understanding, let alone statements.  After a while, the designated leader came back to tell us that each friar was to spend the afternoon crafting what was really most important to him.  Those who wanted would have a chance to address this proposal to the entire Chapter after the election of the Minister General.

There was another straw ballot for Minister General.  One man seemed to have the straw votes needed to only need one ballot in the actual election tomorrow. 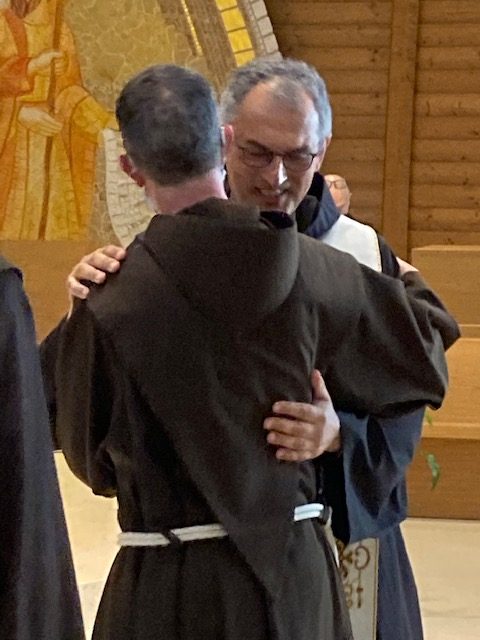 Quite a bit of excitement at breakfast.  There was a buzzing going on about who would be the best Minister for us at this time.  You could almost hear minds changing, while other interior doors were slamming shut!

At 9 a.m. Cardinal João Braz de Aviz, from the Congregation for Institutes of Consecrated Life and Societies of Apostolic Life, presided and preached at the Mass.  By 10 a.m. the capitulars gathered in the large Aula.  A roll call was given.  The Cardinal now presided over the Chapter.  In the moments before the vote, Michael Perry gave his formal renunciation of the office.  A song invoking the presence of the Holy Spirit was sung.  And then, Massimo Fusarelli was elected on the first ballot.  The votation was done with precision, every ballot read aloud, then examined by a number of people and put into the count.  There was a procession to the chapel as we again sang Veni Creator Spiritus.  The tower bells were pealing.  In the chapel Cardinal João Braz de Aviz prayed over Massimo.  The brothers sang the Blessing of Brother Leo to him, extending their hands, after which Massimo gave the Blessing of St. Francis to all the friars: “May the Lord bless you and keep you…” Then all of us, masked and unmasked, came forward to give the abrazo.

The capitulars went outside for the traditional group photo, but for the first time in my life there was a drone with a camera attached so that it could capture all of us.  I thought of the great ladder that Frank Jasper used to climb in order to get a shot of us at Chapter.  Now we just need to get a drone!

The evening was marked by a Festive Dinner outside in the courtyard in front of San Lorenzo Brindisi.  Huge speakers, various “stations” of food:  some grilled, others baked, lots of salad and vegetable options, and of course, a table for drinks and a tap for beer kegs.  Even outdoors, the volume was loud.  But it kept increasing, as the music from the large speakers that had been brought in were cranking out dance music.  There was a break as the large cake in honor of the new Minister General was cut.  Friars found their way to a piece (or two!) of this multi-layered confection.  There were various small circles of friars dancing, and still lots of discussion when I went to bed.  Worn out by such an incredible day.

Once again, the election of the Minister Vicar happened on the first ballot.  Isauro Covili was considered early on for this after the election of Massimo.  They balance each other out geographically, as Isauro is from Chile and formerly the Provincial of the Province of the Holy Spirit.  He had some good statements about the friars needing to live among the poor and to be taught by the poor.  I believe it captured the energy that the Chapter wanted to give.

The rest of the day was taken up with proposals for how to live our Franciscan life in this 21st Century.  There was much back and forth on wording, and contradictory proposals, but the Presidents’ Commission will put some of this together to begin voting on tomorrow.  There will be new additions regarding the Safeguarding of Children, as well as proposals that move us to Wake Up and not be sleeping to the Signs of the Times.  The theme of this Chapter is just that:  “Arise, and let Christ be your light.”

Fr. Mark Soehner, OFM, is the Provincial Minister for the Province of St. John the Baptist. His next updates is: Fr. Mark at General Chapter July 15-18

View more photos on our Flickr album: Fr. Mark at the General Chapter