Inspiration from the friars 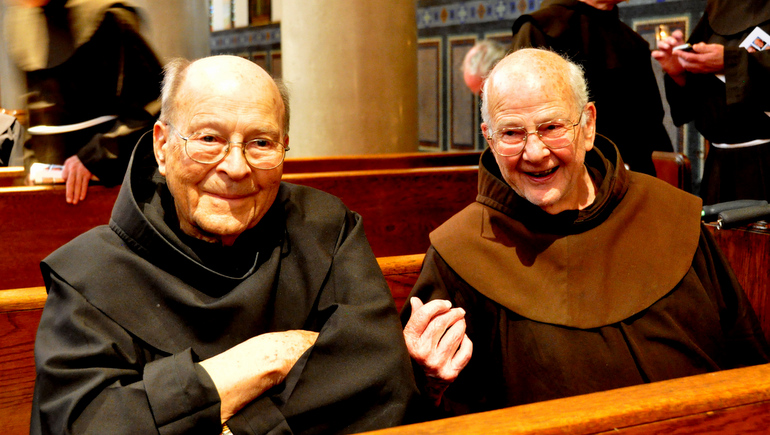 Friars Valens Waldschmidt and Cyprian Berens were interviewed by Sr. Eileen for The Catholic Telegraph in 2012. Photo by Fr. Frank Jasper, OFM 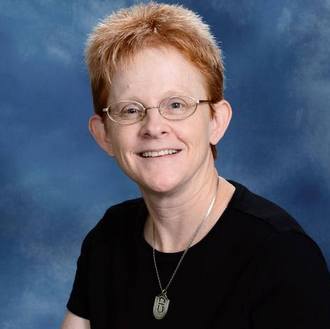 Reflecting on my life and ministry, it’s accurate to say I have the Franciscans to thank for my first experience as a published writer. Celsus Griese was principal at Annunciation School when my family moved to Clifton in 1978. He was quite the disciplinarian, and while some people didn’t appreciate his approach, my parents did. When Celsus’ methods were criticized in the local press, I responded with my own letter to the editor in his defense. Imagine the excitement of a seventh grader and aspiring writer when the letter was published in The Cincinnati Enquirer.

I went on to attend Saint Ursula Academy, ultimately joining the Ursulines of Cincinnati. My community is grateful that our foundress, St. Angela Merici, is part of the Franciscan family. As a young woman, years before founding the Company of Saint Ursula, Angela became a member of the Third Order of Saint Francis, committing to a life of simplicity and service. For many years, my fellow Ursuline, Elizabeth Lang, was an active parishioner at St. Monica-St. George and raved about Al Hirt’s homilies. Prior to COVID, we were blessed to have Dan Anderson as the presider at most of our community liturgies. Dan is definitely an Ursuline in spirit and brings a special understanding of Angela when he celebrates with us. 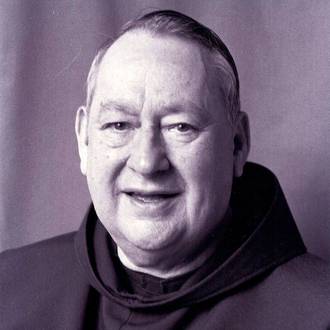 My brother, Tom, kept the Franciscan connection going at Roger Bacon, where he played trombone in the band. A member of the Class of ’86, Tom has fond memories of the friars and the education he received under their leadership.

Fast forward through 15 years, time in the military, a couple of civilian jobs, joining the Ursulines, and by God’s grace and amazing sense of timing, I was offered a position as a staff writer at The Catholic Telegraph at the end of my first year in the novitiate. I’m sure my early years at the CT offered the chance to cover the Franciscans, but my earliest recollection of visiting the friary is the summer of 2002 to interview Toni Cashnelli about her cat ministry. Kindred spirits in our love for felines, it was the start of long, fruitful professional relationship.

Any time the chance came about to interview a friar or cover a Franciscan ministry or event, I knew it would be an opportunity to be inspired, for my faith to be deepened. During a Mass at St. Francis Seraph in December 2009, bringing its 150th jubilee year to a close, I was moved by the words of Greg Friedman, then-pastor, who said the friars’ ministries are “bigger than the parish itself. It’s not just the friars, but all who are Franciscan at heart. The Franciscans and their friends have found ways to minister that have flourished and are helped by a broad community of support. People come from all over Cincinnati. They like the Franciscan spirit, which is based on community. Everyone here is very friendly. You don’t stay a stranger for long.” 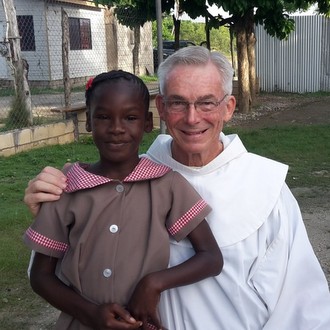 Cyprian Berens and Valens Waldschmidt were retired from active ministry when I spoke with them in 2012, yet still finding ways to share the spirit of Francis and reach out to other residents at St. Paul’s Archbishop Leibold Home for the Aged. Cyprian was a cheerful presence as he tooled around the Home on his scooter, greeting residents and employees with a smile and words of encouragement. Reflecting on his ministry over the years, Cyprian shared a sentiment I can definitely relate to: “Obedience sometimes means you go kicking and screaming into something and it turns out wonderfully because of God’s hand in it.”

Valens expressed his joy in celebrating Mass and visiting his fellow residents, and his special fondness for the Prayer of St. Francis. For him, life as a Franciscan meant “a life of thanksgiving, shared with God, focused on the primacy of Christ and finding God in all of creation.”

Bill Farris had an especially meaningful message during our 2013 interview as he prepared to bid a fond farewell to Roger Bacon, where he was concluding 12 years as its first president: “Always be open to God’s call and be ready to embrace the blessings that lay ahead.”

Developing relationships with others in whatever capacity he has served has been a huge part of Tim Sucher’s ministry. “God entered into a relationship by becoming one of us,” he said during a 2017 interview for the inaugural Religious Brothers Day. “Aren’t we called to do the same? My relationships have colored my life, my vocation. I’ve learned a lot, and hopefully done some good for the people I’ve encountered. I know I’ve been enriched by them.” 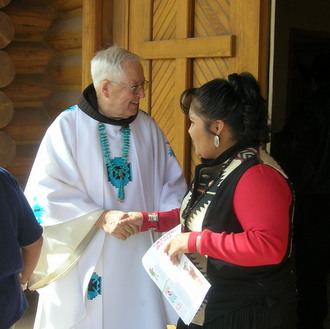 Interviews with Jim Bok and Blane Grein, in 2016 and 2018, respectively, provided insights into the openness and missionary spirit of the Franciscans. Jim admitted that while becoming a missioner was not on his radar when he joined the friars, God was preparing him all along through a variety of experiences. During formation, he spent four months in Mexico, one month in an intensive language course, and three more in a Franciscan parish. It was a “transformative time” for him, Jim recalled. “For the first time in my life, I was a minority person — different color, different culture and different language (hardly fluent in Spanish). I felt what it was like to be on the outside, so to speak. And I witnessed, for the first time, some pretty awful poverty.” That experience stuck with him, and along with some inspiration from the Holy Spirit, led him to Jamaica as a missioner.

Blane spoke of his mission experiences and the many blessings involved, along with sharing some words of wisdom: “I have valued and treasured each assignment and the opportunity to get to know and respect how people do things in their culture. I never had a bad experience. With every assignment, I would tell myself: ‘For a year, keep your mouth shut, but your eyes and ears open. Listen, learn and ask questions.’”

These are just a few examples of how I’ve been inspired by the friars over the years. Thank you for the many spiritual and life lessons and your example of faith. I look forward to the opportunity to learn more and to share your stories and good news! 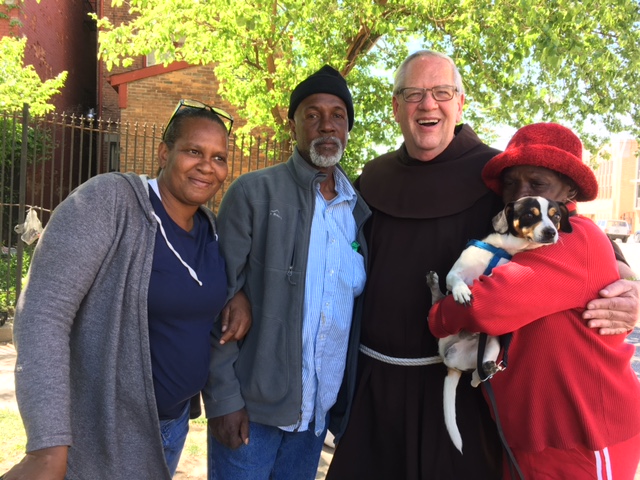