“Desire above all things to have the Spirit of the Lord and its holy activity,
and pray always with a pure heart,”
St. Francis of Assisi (The Later Rule, Chapter X:8)

In honor of St. Francis, we invite you to pray an online Solemn Novena, September 25 – October 3, culminating on his Feast Day, October 4. Each day of the novena will begin with a reflection by a Franciscan friar followed by the novena prayers in both written and video formats, read by Fr. Murray Bodo, OFM. 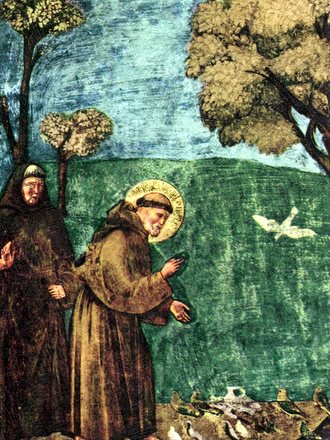 St. Francis preaches to the birds by Giotto (1297) Public domain

Who was St. Francis of Assisi?

He preached peace in an era when life without war was unthinkable. He embraced the poor while others treated them with scorn. And he allied himself with nature centuries before humanity understood its connection to every living thing.

In his brief life of 44 years, Francis had a seismic impact on the Church – an impact we feel today, 800 years after his death. In life he was Il Poverello, “The Little Poor Man”. In death he became one of the most powerful influences for good that the world has ever seen.

Most know something of the history of Francis, born Pietro Bernardone in 1182 in Assisi, Italy. The son of a wealthy merchant, he aspired to become a knight and left a life of privilege to fight for Pope Innocent III. Sidelined by illness, Francis found his calling. Taking stock of what had been a life without purpose, he gave away everything he owned and found new meaning in serving the Lord with all of his heart.

The joy he discovered in doing so was contagious. His mission, he believed, was contained in a message from Christ: “Go rebuild my Church, which is falling down.” His zeal for the Gospel and his lifestyle of radical simplicity drew skeptics and derision – but it also drew followers.

Devoting himself to a life of poverty with a community of “lesser brothers” or “fratres minores”, Francis spent the rest of his days as an itinerant preacher and beggar. His passion and selflessness, the witness of his everyday life, inspired the people of his time and led to the founding of the Order of Friars Minor, the Franciscan brotherhood to which we belong. Our rule, as was his, is “To follow the teachings of our Lord Jesus Christ and to walk in his footsteps.”

With pride in our past and hope for our future, we continue the quest begun by Francis for a just and harmonious world.

Fr. Murray is the author of the well-known book, Francis: The Journey and the Dream, published by Franciscan Media. For more information about Fr. Murray’s books visit his website at murraybodo.com

Lamentation: Why we must cry out to God

Celebrate the Feast of St. Francis