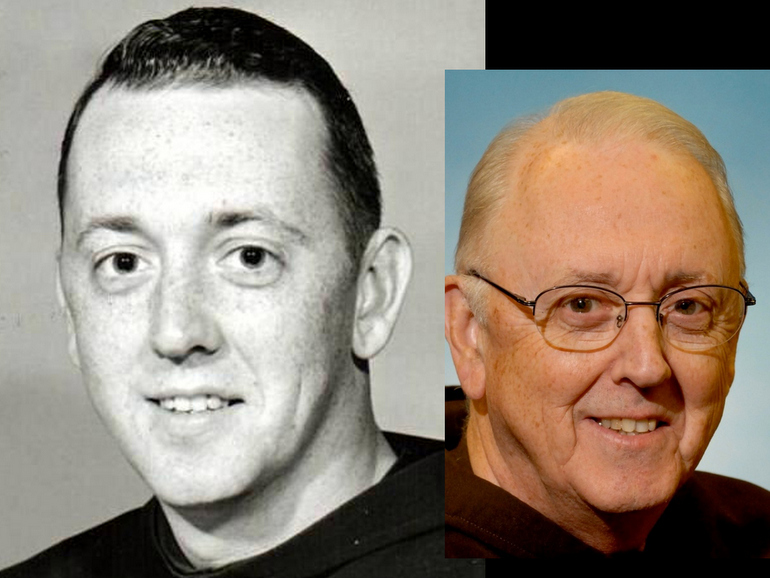 Photos of Fr. Jim Van Vurst, OFM, as a young friar and a few years ago.

A person of infinite compassion with a wise, quiet presence, who was always willing to listen and never had a harsh word to say about anyone. That’s how those who knew and loved Jim Van Vurst describe their faithful friar, brother, colleague and friend. 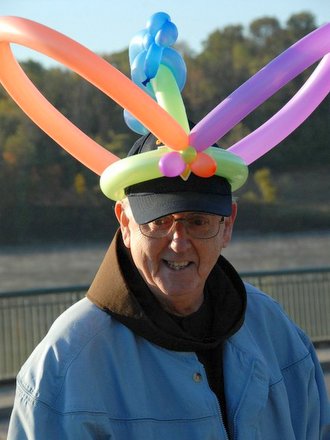 The St. Clement Parish choir led the congregation in singing a beautiful rendition of “Christ, be our Light” (Bernadette Farrell) at the start of Jim’s funeral Mass on Sept. 27, attended by dozens of people whose lives he had touched. Provincial Minister Mark Soehner, celebrant, said that “something in the song today reminds me of Jim. Let us be servants to one another. Jim was that. He was a servant to us, making God’s kingdom come.”

During the homily, Fred Link made note of the common theme running throughout the three Scripture readings Jim had chosen for the Mass (Job 19:1, 23-27, 1 John 3:1-2, and John 14:1-6): “a message meant for us,” Fred said. “Jim chose these passages, while they lifted his spirits, I’m sure he wanted us to hear the good news so powerfully present in each text. I believe and trust that you agree that the unifying message is one of hope, that good triumphs. It’s a message of hope for something better to come; hope in someone who will come, and that someone, of course, who we will see with our own eyes and who you and I will be like, is Jesus, our way, our truth and our life. Jim lived that message, which I believe is why folks were so attracted to him, and he preached it by his life and by his words.”

“The people from St. Clement loved his teaching and preaching,” Fred added, “He loved teaching about heaven and our journey there. He had the gift of taking profound mysteries and making them accessible. It was so clear that Jim himself believed in the good news and he so wanted to tell others. He used the heart language of art, watercolor, even acrylic, from time to time, but more so compassion.”

Jim was known for never refusing a job, reflecting his generous spirit, Fred noted, saying, “I believe Jim saw whatever he was asked to do as another opportunity to bring the good news to those he served.” 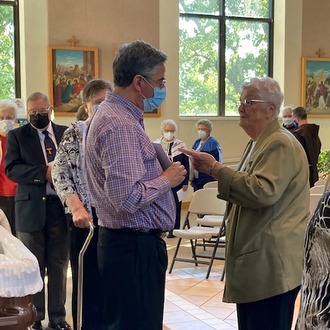 Jim’s only sibling, younger by seven years, Sr. Marianne Van Vurst, SC, described him as “the best brother anyone could ever think of having. We were best friends from the day I was born. He carried me home from the hospital in his arms in the backseat of our car.”

Their lifelong friendship included good times and meaningful ones, from fishing trips and golf games to sharing their hopes and dreams. “He was born with a vocation to the priesthood,” Sr. Marianne said. “It was imbued in him in our mother’s womb. It was just something that came naturally for him, what he knew he was going to do. He was always going to join the Franciscans and got to know them at our parish, the Shrine of the Little Flower in Royal Oak, Michigan.”

“He encouraged my vocation,” she said. “I gave it much thought and prayer and we had many conversations about it.”

Sr. Marianne also spoke of Jim’s compassion, acceptance, understanding and gift for helping people work through their problems. “He helped people accept the fact that it’s okay to make mistakes and that God still loves them.”

“Jim was the brother I never had,” said her close friend Sr. Lynn Heper, SC. “He and Marianne would come over on birthdays, holidays, for dinner on the weekend. They were so close, and accepted me as part of the family, too.” 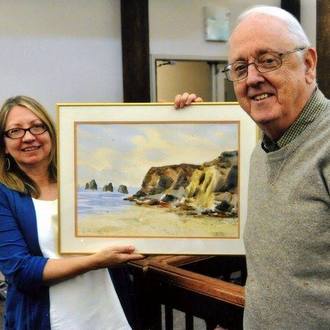 Fr. Jim presents one of his beautiful watercolor paintings to co-worker Marilyn Wilson at the staff Christmas party in 2015

A wise and compassionate listener

Jeremy Harrington remembers Jim as a man of sound judgement, a good listener and wise advisor. Among those who experienced his compassion and understanding was Tim Sucher, who said, “I will never forget him for being the friend, just the brother I needed, during a difficult time.”

For a number of years, Jim served as the spiritual assistant to the Mother Bentivoglio Federation of Poor Clares. Sr. Doris Gerke, OSC, said, “Jim was a great support to us. We could always go to him with any problems or difficulties. It was wonderful to have his psychological expertise and his spiritual expertise for all of us as Poor Clares. Jim was very practical all of those years for us. He was so adaptable and so personable. I want to thank God for Jim in our lives.”

Frank Vandeventer shared that in 2013, when he decided to return to the Church after some 40 years away, a meeting with Jim reassured of him of God’s love and paved the way for his own vocation. “He heard my confession and welcomed me home,” Frank said. “He said, ‘you may have been away from the Church, but you didn’t desert God and He hasn’t deserted you.’ I also asked him about becoming a Secular Franciscan, he gave me the information and the rest history.” 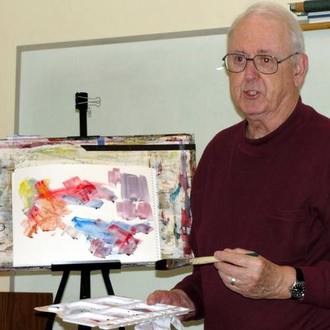 Fr. Jim enjoyed sharing his love of art with others through painting classes and demonstrations.

Gwen and Don Juszczyk came to know Jim during his 11-year tenure as director of pastoral care at St. Leonard Center, where they both volunteered. “He was a true disciple of Christ, patient, kind and compassionate,” Gwen said. “I thought of him as an angel, since it almost seemed as though he had wings as he ministered to people throughout the building and seemed to fly from one end to the other.”

“He was a true servant,” added Don. “Early on, when we were short staffed, he would make toast and take it to the residents. He was a pure giver and anyone who came in contact with him walked away feeling better than they did before.”

“You couldn’t help but love him,” said Gwen, expressing her gratitude for the trust and respect Jim had for her and other volunteers. “He walked the journey of life with whomever came into his care, and just knew what people needed, helping them to experience their self-worth and the love of God.”

Province Nurse Michelle Viacava recalled that Jim accepted aging and illness with characteristic grace and humor. “He was one of the kindest men I’ve ever known, with a sweet smile and caring eyes, always waving and smiling to whomever he passed. He was always ready with a kind word and appreciative of all that was done for him. He was always ministering as a priest, even until the end. He even heard confessions for several staff members the week before he died. He always said he never retired as a priest and always was willing to give counseling. He was very spiritual and had such a close relationship with the Lord.”

A letter from our Provincial on the Feast of St. Francis