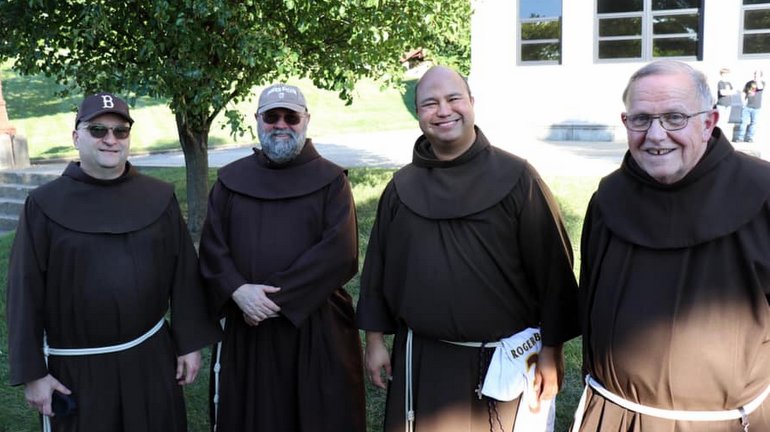 In order to celebrate 200 years of faith in the Archdiocese of Cincinnati, religious communities, along with their friends, supporters and partners in ministry, and area schools and parishes, are coming together for service to others. The official archdiocesan day of service is Oct. 9, but outreach efforts are also encouraged before and after that date.

Because the day of service coincides with Death Penalty Abolition Week for Ohio faith communities, Oct. 8-17, the SJB friars are asking others to join them in a letter writing campaign to Ohio legislators, encouraging them to support HB 183 and SB 103 to abolish the death penalty. Hand written letters are suggested over phone calls and emails because they are more likely to be reviewed by elected officials. A sample letter may be obtained by emailing sbjfco@franciscan.org.

At Roger Bacon High School, students and staff are dedicating a whole week to service, according to Roger Lopez. “This will help us reflect on our presence in southern Ohio, especially as Franciscans,” Roger said. “Like St. Francis, who reached out to those forgotten and overlooked, Roger Bacon students will reach out to place our Christian faith in action.”

The schedule is as follows:

Monday, Oct. 4: Solemnity of St. Francis with the whole day celebrating Franciscan life.
Tuesday, Oct. 5: Bingo with the residents at St. Paul/Archbishop Leibold Home for the Aged and Infirmed.
Wednesday, Oct. 6: “Sow Love” Students will create cards of gratitude and encouragement for the archdiocese sponsored ministries of St. Rita School for the Deaf and Catholic Charities of Southwest Ohio.
Thursday, Oct. 7: “Coffee with Christ” Before school starts, students will gather to reflect on the importance of faith and service.
Friday, Oct. 8: “Freshmen Service Day” Ninth grade students will travel to Over-the-Rhine to work with non-profit organizations and discover the importance of reflecting on service.
Sunday, Oct. 10: “Trash OTR” Students will gather for Eucharist at St. Francis Seraph Church, followed by beautifying the neighborhood. Afterwards, all will enjoy lunch at Findlay Market.