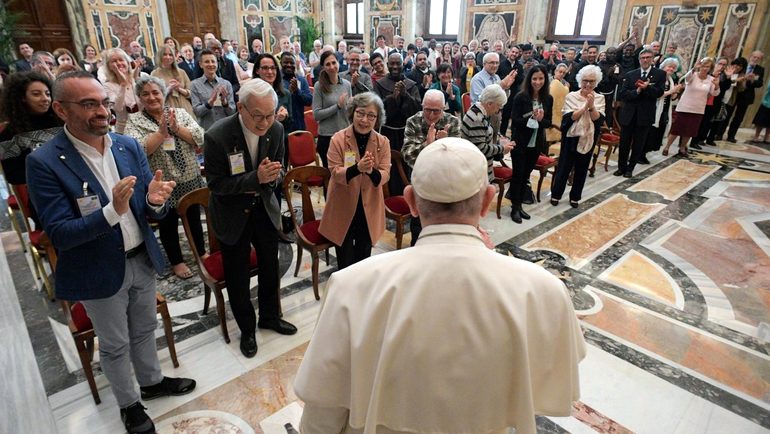 Pope Francis meets with members of the Secular Franciscan Order during their General Chapter in Rome. Photo courtesy of Vatican Media.

During his address to Secular Franciscans at their international General Chapter in Rome in November, Pope Francis referred to them as “men and women of hope,” asking that they fight for justice, work for an integral ecology, collaborate in missionary projects, become artisans of peace and witnesses of the Beatitudes.”

Eight hundred years after their original Rule was given to them, Joe Edwards, OFS, minister of the Holy Trinity Region, said the Secular Franciscans are taking this admonition to heart, with the OFS Rule serving as “our road map that offers guidance on how we can live today as Francis, Clare and many faithful followers have lived over the years, attempting to follow the Gospel and to bring the Gospel message to all, especially the disenfranchised and most vulnerable of our brothers and sisters.”

As they gathered for Mass at St. Clement Parish in St. Bernard on Nov. 13 to mark the anniversary, it was an opportunity for members of the Holy Trinity Region, comprised of some 200 members in 14 fraternities, to recall their own call to the Secular Franciscans and how they are living it out today.

Originally from Wichita, Joe was heavily influenced by the Franciscan charism from an early age, from the friars who ran his parish to the sisters who taught in his grade school. “I learned about God through a Franciscan lens,” he explained. “For me, that means viewing the world with the emphasis on God coming to be with us and saving us through the Incarnation. Our response to God’s love then takes the form of service to others and recognizing that there others in the world that are in greater need than ourselves. It’s a reminder that we need to be of service and respond to peoples’ needs.”

“I think being a Secular has really deepened my efforts to live out my baptismal promises,” said Joe, who ministers as a clinical child psychologist. “It continues to make me more aware of where the world is hurting and where it needs a Franciscan response.” 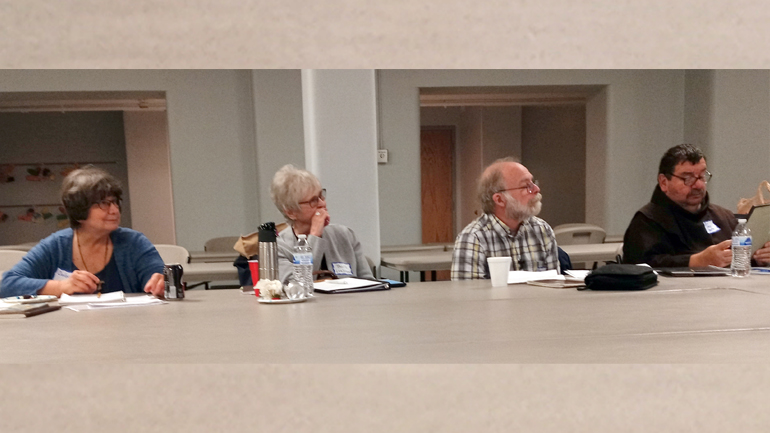 Secular Franciscans from the Holy Trinity Region, along with Jerry Beetz, spiritual assistant, far right, listen to a presentation at the Fall Chapter.

Anita Bidleman, OFS, a member of Our Lady of the Angels Fraternity, was a just a teenager when she came to the Secular Franciscans seeking a way to deepen her spiritual life in the absence of a youth group at her parish. Professed in 1953, Anita said, “It’s been a way of life for me, a way of living out my faith and following the virtues of St. Francis and St. Clare. I met my husband, Ralph, through the Seculars.”

That way of life includes morning and evening prayer, frequent Mass attendance, participating in local and national meetings and outreach to those in need, from preparing meals for the homeless to supporting a leper colony in Brazil. “We’re encouraged to reach out to anyone who needs our love and care, to be present to them,” Anita said. 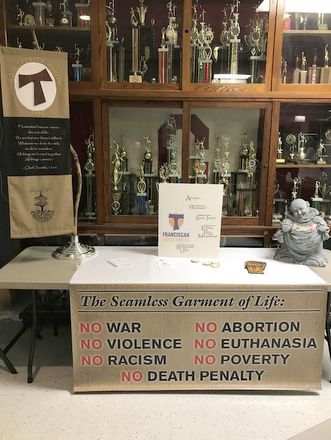 A display from their Chapter proclaims the Secular Franciscans’ commitment to the sanctity of all life.

“I thank the friars who have been present to us over the years. They’ve been such an inspiration,” she added, noting that her own brother, Fr. Paul Juniet, OFM, is a member of our Lady of Guadalupe Province.

Colleen and John Gerke, OFS, members of St. Michael Fraternity, were inspired to join the Secular Franciscans after a pilgrimage to Assisi 20 years ago. Already familiar with the Franciscan charism due to her ministry as director of faith formation at St. Clement, Colleen said walking in the footsteps of Sts. Francis and Claire “drew me even closer to their spirituality.”

“I think part of it goes back to when I was in high school,” she explained. “I was drawn to environmental and social justice issues then, and those things are so central to Franciscan activity. It’s just how I wanted to live my life as an adult. I think being in Assisi, then looking back on the experience, was a reminder of how grounded in the lived experience Franciscan spirituality is. It’s that connection to Jesus Christ in the Gospel and how that is lived out, and finding Christ in everyone that we meet, in all situations that we’re in.”

As part of serving in regional leadership, one of Colleen’s endeavors has been outreach to youth and young adults. Prior to COVID, she held lunchtime gatherings for fifth through eighth graders at St. Clement School with various speakers and activities geared toward helping them learn more about St. Francis and Franciscan spirituality. This included filling bags of bird seed to distribute to parishioners and making traveling shoebox Stations of the Cross that were handed out to all of the classrooms at St. Clement to use during Lent.

For John, the pastoral associate at St. Clement, it was the fraternity, hospitality, living simply and call to serve others that drew him to the Secular Franciscans, although his connection to the Franciscan family actually goes back to his baptism by a friar. In his teens, he discerned a vocation to the priesthood and went on to spend two years at Duns Scotus, where “daily morning and evening prayer and life in community really fed me.”

He ultimately realized God was calling him to married life, along with ministry as a deacon. He was ordained in 2007. The call to share more of themselves, a passion for the sanctity of human life and the Franciscan core value of hospitality are key to the Gerkes’ involvement in the Seculars, John said. Over the years, they’ve welcomed a number of unwed mothers and immigrant families into their home, all out of “Franciscan hospitality,” he explained. “It’s about being a place of welcome and taking action at the personal level to reach out to people who need help.”

Jerry Beetz, who has served as the spiritual assistant to the Holy Trinity Region since August 2020, has found the role to be rewarding as he visits the various fraternities, witnesses elections of officers and helps provide Franciscan formation at monthly gatherings. He is grateful for the efforts of the Secular Franciscans, saying, “In addition to coming together for prayer, they participate in collecting food for the hungry, work in the soup kitchen, write cards and letters to those in hospitals and nursing homes, participate in programs aimed at protecting for life in all its forms, and seek to answer Pope Francis’ challenging call to them: ‘Where are you?’’’

He noted the celebration of the anniversary of the Rule will culminate in Phoenix, Ariz. on Aug. 3-7, 2022, with the 100th anniversary of the National Quinquennial Congress. Jerry encourages his brother friars to attend, noting the event will “help strengthen our family ties.” More information can be found at https://secularfranciscansusa.org/.